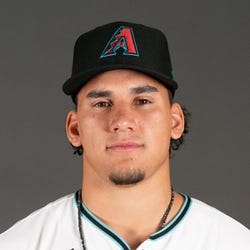 2022 Stats
AVG
.231
HR
8
RBI
39
R
45
SB
4
2023 Projections
AVG
HR
RBI
R
SB
Unlock Our Projections
2023 Fantasy Outlook
Thomas opened the season with Triple-A Reno, but after posting a .936 OPS in 27 games, he was called up to the Bigs. Thomas also ended the season with the Aces as he was sent down towards the end to work on pitch recognition. Thomas' game is frequently putting the ball in play, mostly on the ground. Through August 31, he recorded a .285 BABIP. However, it plummeted to .146 in September, prompting his demotion. With limited power and speed, Thomas needs grounders to find holes to be productive. His defense is good, but he'll need to hit to sustain playing time in a crowded and talented Diamondbacks outfield. It may not be long before Thomas takes a backseat to the trio of Daulton Varsho, Corbin Carroll and Jake McCarthy. In fact, he'll likely be squeezed out of mixed league relevancy with his high contact rate more useful in NL-only formats. Read Past Outlooks
read more
RANKSFrom Preseason
#

* Exit Velocity and Barrels/PA % are benchmarked against 2019 data (min 400 PA) and Hard Hit Rate is benchmarked against last season's data (min 400 PA). See here for more exit velocity/barrels stats plus an explanation of current limitations with that data set.
BB/K
0.30
BB Rate
5.4%
K Rate
18.0%
BABIP
.263
ISO
.113
AVG
.231
OBP
.275
SLG
.344
OPS
.619
wOBA
.274
Exit Velocity
87.4 mph
Hard Hit Rate
26.0%
Barrels/PA
2.9%
Expected BA
.238
Expected SLG
.335
Sprint Speed
25.9 ft/sec
Ground Ball %
58.0%
Line Drive %
17.0%
Fly Ball %
25.0%
Prospect Rankings History
Advanced Batting Stats
Loading Advanced Batting Stats...
Additional Stats
Games By Position
Defensive Stats
Loading Games Played by Position...
Loading MLB Defensive Stats...
Batted Ball Stats
Loading Batted Ball Stats...
Stats Vs Upcoming Pitchers
Want more matchup stats?
View Alek Thomas vs. Pitcher Stats
Loading Matchup Stats...
Diamondbacks Depth Chart
Our full team depth charts are reserved for RotoWire subscribers.
Subscribe Now
Recent RotoWire Articles Featuring Alek Thomas
2023 Fantasy Baseball Rankings - Way Too Early Top 300 Draft Ranks
45 days ago
45 days ago
James Anderson provides a way too early top 300 rankings for those who have the itch to start drafting for 2023.
Collette Calls: Buckle Up
58 days ago
58 days ago
Jason Collette is excited for the increase in steals which the new rules should bring next season. Which hitters and pitchers will be affected the most?
Past Fantasy Outlooks
2022
2021
2020
2019
Thomas put up impressive numbers (.313/.394/.559, 18 HR, 13 SB in 106 games) at Double-A and Triple-A last season at an appropriate age (21) for a top prospect at those levels. However, it should be noted that he took advantage of the hitter-friendly conditions in Amarillo and Reno (1.086 home OPS, .835 road OPS). Even so, his 20.0 K% and 10.5 BB% were encouraging marks, and he used the whole field at both stops. His groundball rate has been north of 50% at every stop other than High-A in 2019, so it's a hit-over-power profile, and given his slight build (5-foot-11, 175 pounds), it will likely always be that way. The key for Thomas to be a valuable fantasy outfielder will be for him to be hitting first or second in the lineup and putting his plus speed to use on the bases. He was successful on 59.1% of his stolen-base attempts last season and has a 61.5% success rate for his career, so 10-15 steals per season seems like a fair estimate in the majors. He doesn't have much left to prove in the minors, and center field is wide open for him at the big-league level, so we could see him in the first half.
Given the well-deserved hype surrounding Kristian Robinson and Corbin Carroll, Thomas feels a bit like a forgotten man. He can't match the upside of his organizational outfield mates, but Thomas is the elder statesman (turning 21 in late April) and could beat them to the majors. The lefty-hitting center fielder has long fit the archetype of a potential table setter, thanks to a strong hit tool and 60-grade speed. He doesn't have a great arm, but is a good enough defender in center field to be an everyday player even if he never taps into 20-homer pop. Thomas will probably need to become a plus hitter to be a sought after fantasy commodity, otherwise he will be a Kevin Kiermaier type who gets scooped up in the later rounds strictly for his stolen-base contributions. He should open the year at Double-A and should reach the majors in 2022.
Thomas' prospect value peaked when he was riding high in the Midwest League, looking the part of a future five-category center fielder. With a well-rounded tool set that is headlined by plus speed and a potentially plus hit tool, that outcome is still very much in play, but he had a poor showing in a 23-game stint in the Cal League. His K% skyrocketed from 17.9% at Low-A to 31.7% at High-A, and his BB% ticked down. He stopped doing damage when he connected -- his ISO was cut in half and he logged just four extra-base hits in 104 PA. His GB% fell from 55.5% to 46.7%, so he may have been tinkering with his swing after the promotion. He definitely needed to cut down on the groundballs, so this could end up being a positive. A 153 wRC+ in 91 games is more instructive than four weeks' worth of struggles by a 19-year-old at High-A, but he needs to recapture the command of the strike zone he showed at Low-A.
It seemed valid to be concerned about Thomas' lack of physicality during the pre-draft process -- his listed measurements of 5-foot-11, 175 pounds appear pretty generous. The No. 63 overall pick put those concerns to rest by showing above-average potential on both sides of the ball. He stays within himself, lacing the ball to all fields while taking his fair share of walks (8.9 BB%) and rarely striking out (13.6 K%). In addition to showing the potential to develop into a .300 hitter in the big leagues, Thomas puts his plus speed to good use on the bases (12-for-17 on SB attempts in 272 PA). It is possible that he could develop enough power to hit 10-to-15 home runs in a good year, but it will be his batting average, steals and runs that drive his fantasy value. The Diamondbacks will send him to the Midwest League for his first full season. He was one of the younger high schoolers in his class, and won't turn 19 until April 28.
More Fantasy News