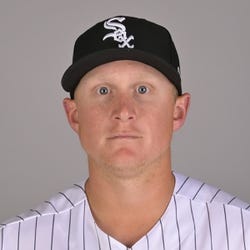 2022 Stats
AVG
.276
HR
17
RBI
76
R
59
SB
0
Rest-of-Season Projections
AVG
HR
RBI
R
SB
Unlock Our Projections
2022 Fantasy Outlook
Vaughn had a decent rookie season after making the club out of camp, but his final numbers were well below fantasy expectations. The market was bullish on the slugging rookie even though he was relegated to the alternate site in 2020 following a fantastic Cactus League showing. The X-factor in play was Tony La Russa's unpredictable relationship with rookies, and at the end of the day, the fears of Vaughn struggling at the plate and getting inconsistent playing time were validated. La Russa used him in unusual ways, and the rookie finished the season slightly below league average by most offensive measures. The good news is his struggles should reset his draft cost to a more fitting level, though at the same time, the same challenges exist, with similarly-profiled outfielders clogging the depth chart. He should be better in 2022, but his playing time is hardly any more guaranteed than it was this time last year. Read Past Outlooks
read more
RANKSFrom Preseason
#265
ADP
#

* Exit Velocity and Barrels/PA % are benchmarked against 2019 data (min 400 PA) and Hard Hit Rate is benchmarked against last season's data (min 400 PA). See here for more exit velocity/barrels stats plus an explanation of current limitations with that data set.
BB/K
0.33
BB Rate
5.5%
K Rate
17.0%
BABIP
.305
ISO
.163
AVG
.276
OBP
.325
SLG
.439
OPS
.764
wOBA
.335
Exit Velocity
90.9 mph
Hard Hit Rate
31.5%
Barrels/PA
6.1%
Expected BA
.260
Expected SLG
.422
Sprint Speed
23.2 ft/sec
Ground Ball %
47.3%
Line Drive %
18.5%
Fly Ball %
34.1%
Prospect Rankings History
View Complete Andrew Vaughn Prospect Ranking History
Advanced Batting Stats
Loading Advanced Batting Stats...
Additional Stats
Games By Position
Defensive Stats
Loading Games Played by Position...
Loading MLB Defensive Stats...
Batted Ball Stats
Loading Batted Ball Stats...
Stats Vs Upcoming Pitchers
Want more matchup stats?
View Andrew Vaughn vs. Pitcher Stats
Loading Matchup Stats...
White Sox Depth Chart
Our full team depth charts are reserved for RotoWire subscribers.
Subscribe Now
Recent RotoWire Articles Featuring Andrew Vaughn
Yahoo DFS Baseball: Sunday Picks
6 days ago
6 days ago
Chris Morgan is happy to pay up for Pete Alonso even at Oakland Coliseum for his Sunday Yahoo lineups.
DraftKings MLB: Sunday Breakdown
6 days ago
6 days ago
Chris Morgan likes Luis Castillo to earn a bunch of fantasy points against the Royals.
DraftKings MLB: Friday Breakdown
8 days ago
8 days ago
Chris Morgan likes a couple of White Sox hitters to do well against Eduardo Rodriguez and the Tigers.
Past Fantasy Outlooks
2021
2020
Reading between the lines of what GM Rick Hahn told reporters after the 2020 season, it sounds like Vaughn will be the replacement to Edwin Encarnacion, whose option was declined. They will presumably manipulate his service time by waiting a few weeks to bring him up if a long-term extension isn't reached before the season. This may seem like a fast track for the No. 3 overall pick in 2019, but Vaughn turns 23 in April and was the talk of summer camp, so it sounds like he is close to ready. Plus all-fields power has been a part of the right-handed first baseman's profile dating back to college, but it's his ability to recognize pitches and his excellent overall approach at the plate that makes him special. He goes up to the plate looking to do damage with a swing he describes as "controlled violence". He may not be a .300 hitter, but his OBP and SLG should eventually be among the best marks at the position.
Teams are moving away from the notion that a first baseman needs to be a big left-handed hitter who fields his position well, and this movement culminated in Vaughn (6-foot, R/R) getting selected out of Cal with the No. 2 overall pick. The recent success of players like Rhys Hoskins and Pete Alonso lessened the perceived risk, but moreover, evaluators just love Vaughn's bat that much. He could be a 70-grade hitter with 70-grade power, and in the American League especially, the rest of his profile wouldn't really matter at that point. His raw power was not on full display in his pro debut, but his batted-ball profile was excellent and his 38:30 K:BB in 55 games illustrated his strong handle of strike zone. He is a below-average runner, so his ceiling is capped as a four-category monster. Vaughn is a good bet to be the first player from his draft class to reach the majors, perhaps as early as this summer.
More Fantasy News