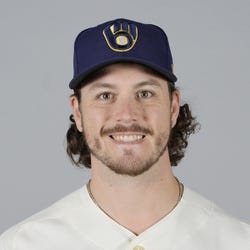 2022 Stats
AVG
.230
HR
8
RBI
28
R
42
SB
1
Rest-of-Season Projections
AVG
HR
RBI
R
SB
Unlock Our Projections
2022 Fantasy Outlook
The implementation of the universal DH bodes well for Anderson in 2022 if his body does not fail him the way it did in 2021. Much was made of Fernando Tatis' shoulder subluxations last year and how he avoided surgery; Anderson had the same problem but could not avoid surgery. His first shoulder issue cost him nearly three months, and that was followed by an oblique injury, COVID-19 and a second shoulder subluxation which led to him having surgery in mid-September. The problem now is that the surgery was on his front hitting shoulder, which hurts a hitter's ability to get full extension on their swing and generate full power. He's twice cleared the .800 OPS threshold in a season, but performance expectations should be modest coming off the procedure. Read Past Outlooks
read more
RANKSFrom Preseason
#478
ADP
#

* Exit Velocity and Barrels/PA % are benchmarked against 2019 data (min 400 PA) and Hard Hit Rate is benchmarked against last season's data (min 400 PA). See here for more exit velocity/barrels stats plus an explanation of current limitations with that data set.
BB/K
0.38
BB Rate
9.7%
K Rate
25.9%
BABIP
.300
ISO
.129
AVG
.230
OBP
.319
SLG
.359
OPS
.678
wOBA
.304
Exit Velocity
89.3 mph
Hard Hit Rate
31.6%
Barrels/PA
6.2%
Expected BA
.235
Expected SLG
.390
Sprint Speed
24.7 ft/sec
Ground Ball %
49.8%
Line Drive %
19.0%
Fly Ball %
31.2%
Prospect Rankings History
View Complete Brian Anderson Prospect Ranking History
Advanced Batting Stats
Loading Advanced Batting Stats...
Additional Stats
Games By Position
Defensive Stats
Loading Games Played by Position...
Loading MLB Defensive Stats...
Batted Ball Stats
Loading Batted Ball Stats...
Stats Vs Upcoming Pitchers
Want more matchup stats?
View Brian Anderson vs. Pitcher Stats
Loading Matchup Stats...
Marlins Depth Chart
Our full team depth charts are reserved for RotoWire subscribers.
Subscribe Now
Recent RotoWire Articles Featuring Brian Anderson
MLB FAAB Factor: Waiver Pickups of the Week
16 days ago
16 days ago
Jason Shebilske's weekly set of waiver recommendations includes Drew Smyly, who's been consistently strong since the start of August.
DraftKings MLB: Tuesday Breakdown
39 days ago
39 days ago
Dan Marcus sets the tone for Tuesday's monster 15-game slate, recommending Mariners ace Robbie Ray against visiting Washington.
NL FAAB Factor: Waiver Pickups of the Week
48 days ago
48 days ago
Jan Levine anticipates the return of a fairly high-profile pitcher to the LA rotation.
National League Trade Deadline Reactions
56 days ago
56 days ago
Juan Soto was the headline trade in the National League, but Jeff Erickson breaks down all of the NL trades at the deadline.
NL FAAB Factor: Waiver Pickups of the Week
62 days ago
62 days ago
With only a couple days before the trade deadline, Jan Levine checks out a few NLers who could benefit from upcoming transactions.
Past Fantasy Outlooks
2021
2020
2019
2018
Anderson had his best year yet, at least judging by his career-high 121 wRC+, helping lead the Marlins to their first playoff berth since 2003. Whether or not he actually improved isn't clear, however. He made less contact than in either of his two previous full seasons, as his strikeout rate jumped significantly from 21.9% to 28.8%. When he did make contact, it came off the bat at a career-low 87.4 mph average exit velocity. Statcast suggests he overachieved by a fair amount, giving him a .228 xBA and a .425 xSLG, numbers which don't quite back up his .255 batting average and .465 slugging percentage. Overall, it's not the most compelling profile, but Anderson should at least do enough to be worth a later-round pick again this season. He has a locked-in role in an improving lineup, though he's still held back somewhat by the Marlins' pitcher-friendly home park.
This is the type of player that would be a much bigger deal in another market and another ballpark. Anderson is the guy in the Miami lineup pitchers don't want to beat them; his overall fantasy production is limited by his surrounding cast and his home park. If he hit in a better lineup and better park, 30 homers and 90-plus RBI would be a very real possibility for him in 2020. He is coming into his third full season at the major-league level and has shown improvement in the three years of MLB experience he has under his belt. He is too cheap for the Marlins to let go anywhere else, so the hope would be Derek Jeter and the other front-office officials improve his surrounding cast quicker so his fantasy value can grow in kind. For now, draft him for the improving player he is and hope his situation changes for the better while enjoying his dual-position eligibility.
For a player with as little prospect pedigree and buzz as Anderson, he had himself a nice little rookie season. He was the second-best hitter on a poor Marlins team, finishing 13 percent better than league average with the bat after accounting for park effects (113 wRC+). His plate-discipline profile was pretty much exactly in line with his minor-league track record, with Anderson walking 9.3% of the time while striking out at a 19.3% clip. The big drawback was the lack of power. Anderson had 34 doubles but only 11 homers and a .127 ISO, and his 51.8% groundball rate and .397 road slugging percentage don't portend much improvement in that department in the years to come. His 19.7% line-drive rate also points to a batting average in the .270s being maybe his ceiling. With his steady plate skills and an everyday role, the soon-to-be 26-year-old Anderson appears primed to once again be relevant in the corner infield, if only as a textbook accumulator.
Anderson lacks impact tools, realistic upside, a high floor and a record of performance at age-appropriate levels in the minors. But he will likely be the Marlins' starting third baseman on Opening Day, so he's got that going for him, which is nice. Prior to 2017, he impressed after getting drafted in the third round in 2014 in the lower levels as a 21-year-old, and had a nice 49-game run at High-A as a 23-year-old, but other than that, he had been roughly a league-average hitter at each stop. However, last season he hit .275/.361/.492 with 22 home runs in 120 games across stops at Double-A and Triple-A before making his big-league debut in September, where he whiffed 29.5 percent of the time. He could hit .250 or .260 with double-digit home runs if everything breaks right. In most organizations he would profile as an organizational depth piece, but after Miami gutted its roster this offseason, Anderson will be a part of a youth movement in 2018.
More Fantasy News