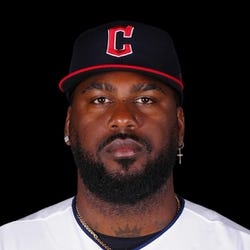 2022 Stats
AVG
.221
HR
14
RBI
47
R
43
SB
2
2023 Projections
AVG
HR
RBI
R
SB
Unlock Our Projections
2023 Fantasy Outlook
It was ultimately a disappointing 2022 campaign for Reyes, though he did show some flashes of potential. In 70 games with Cleveland, he registered a .603 OPS with a 37 percent strikeout rate. The Guardians decided they had seen enough, so they designated Reyes for assignment in August. The slugger latched on with the Cubs and got off to a hot start with his new team, posting a 1.007 OPS across his first 10 games. However, by the end of the season, his OPS dipped to .689 over 48 games in Chicago. Overall, it was a significant departure from the .846 OPS he recorded in 2021, and he also saw his home run total fall from 30 to 14. After the regular season, Reyes became a minor-league free agent, so his 2023 fantasy outlook is a bit murky. He'll have no value while he's in the minors, but if he gets another shot at the MLB level, the veteran has proven capable of producing decent power numbers in the past. Read Past Outlooks
read more
RANKSFrom Preseason
#

* Exit Velocity and Barrels/PA % are benchmarked against 2019 data (min 400 PA) and Hard Hit Rate is benchmarked against last season's data (min 400 PA). See here for more exit velocity/barrels stats plus an explanation of current limitations with that data set.
BB/K
0.19
BB Rate
6.3%
K Rate
33.2%
BABIP
.307
ISO
.144
AVG
.221
OBP
.273
SLG
.365
OPS
.638
wOBA
.282
Exit Velocity
92.0 mph
Hard Hit Rate
37.0%
Barrels/PA
6.8%
Expected BA
.203
Expected SLG
.358
Sprint Speed
23.4 ft/sec
Ground Ball %
47.5%
Line Drive %
18.0%
Fly Ball %
34.5%
Prospect Rankings History
Advanced Batting Stats
Loading Advanced Batting Stats...
Additional Stats
Games By Position
Defensive Stats
Loading Games Played by Position...
Loading MLB Defensive Stats...
Batted Ball Stats
Loading Batted Ball Stats...
Stats Vs Upcoming Pitchers
Want more matchup stats?
View Franmil Reyes vs. Pitcher Stats
Loading Matchup Stats...
Recent RotoWire Articles Featuring Franmil Reyes
MLB: One Man's Trash... (Week 23)
82 days ago
82 days ago
Jeff Zimmerman examines the week's most frequently dropped players in search anyone worth giving a second chance to. Should you be rushing to pick up Matt Manning?
DraftKings MLB: Wednesday Breakdown
91 days ago
91 days ago
Dan Marcus checks in with his DraftKings recommendations for Wednesday, making his picks to help you craft a winning DFS entry.
Yahoo DFS Baseball: Wednesday Picks
91 days ago
91 days ago
Mike Barner’s Wednesday picks include a San Diego bat stack against the Diamondbacks.
DraftKings MLB: Tuesday Breakdown
92 days ago
92 days ago
Dan Marcus kicks off his Tuesday DraftKings picks with Yankees ace Gerrit Cole against visiting Minnesota.
Todd's Takes: Arsenals and Angles
97 days ago
97 days ago
Todd Zola analyzes pitchers with limited arsenals before tackling the most interesting fantasy fall-out from Wednesday's schedule.
Past Fantasy Outlooks
2022
2021
2020
2019
Reyes has proven to be a reliable power producer, posting two 30-homer seasons by the close of his age-25 season. He's backed that with a 94th percentile mark in barrel rate in two separate campaigns, suggesting he could become one of the more prolific and consistent power hitters in the game for seasons to come. However, to take an additional step forward, he'll have to overcome two particular shortcomings in his profile. First, he has consistently shown a relatively heavy groundball lean, as his 36 percent flyball rate in 2021 represents a career high. In addition, Reyes' strikeout rate ballooned to a 32 percent clip -- the worst mark of his career -- which is enough to call his ability to maintain a solid batting average into question. Overall, Reyes is a valuable fantasy contributor because he has a stable power skillet, just don't expect a huge leap forward until he finds a way to lift the ball more.
Expectations for Reyes' power production were sky high in 2020 as he was coming off a season in which he smashed 37 home runs. He still showcased power regularly in 59 games, connecting for 66 batted balls with a 95-mph exit velocity or better -- good for 39th out of 257 qualified batters -- and a maximum exit velocity of 114.7 mph that placed him among the likes of Bryce Harper and Ronald Acuna. However, several aspects of his profile prevented a bigger jump forward. Common to many sluggers, Reyes struggled to make consistent contact by racking up a 16.6% swinging-strike rate and a 28.6 K%. More confounding was Reyes' groundball rate, which reached 50.3% in 2020. That will be something that needs to change for Reyes to reach his 45-plus home run upside. Reyes is now UTIL-only in most formats entering his age-26 season.
Reyes slugged 37 homers in just 548 plate appearances, but also fanned 28.5% of the time. A 99th percentile average exit velocity helped generate an average flyball distance of 349.4 feet, the sixth longest among hitters with at least 450 plate appearances. While Reyes may be able to hit the ball out of any yard, his best position is designated hitter. This isn't a problem after the Indians acquired Reyes from the Padres last summer. So long as Reyes continues to hit right-handers with authority (30 of his homers came in this scenario), he'll be in the lineup nearly every day, save for road interleague contests. Those with Reyes on their dynasty or keeper league roster, enjoy the current outfield eligibility; it may not be this way next season. If you can buffer a low batting average, Reyes is a great source of surprisingly cheap power as the market hasn't yet caught on to his potential.
A big, powerful corner outfielder, Reyes successfully kicked the door down by mid-May, having hit 14 homers in his first 35 games with Triple-A El Paso. He got off to a bit of a rocky start in the majors, but once Reyes settled in, he was excellent. Over the final two months of the season, he hit .318/.385/.548 with six doubles and 10 homers in 49 games (157 at-bats). His 28.1% strikeout rate for the season is a bit of an eyesore, but his K-rate during that stretch run was just 21.8%. While regression to his 29.6% HR/FB should be expected, Reyes has borderline elite raw power, so it wouldn't be surprising if his mark were still over 20% in 2019. The only real question about Reyes in 2019 is playing time. He graded out as a poor defender in the corner and he's coming off a torn meniscus in late November. We'll bet that Reyes is a regular to start, but if he doesn't improve against righties (.247/.298/.449), he could be relegated to a short-side platoon role.
More Fantasy News