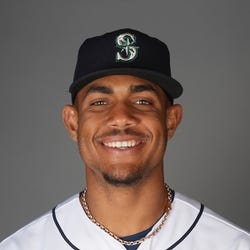 10-Day IL
Injury Back
Est. Return 10/3/2022
2022 Stats
AVG
.280
HR
27
RBI
73
R
81
SB
25
Rest-of-Season Projections
AVG
HR
RBI
R
SB
Unlock Our Projections
2022 Fantasy Outlook
There have been good No. 1 overall prospects and great ones. Rodriguez falls into the latter camp. He passes the eye test and his statistics measure up. Young for every level he has played at, Rodriguez's worst showing was a 145 wRC+ and .293/.359/.490 slash line as an 18-year-old at Low-A in 2019. He has a patient approach and thunder in his bat to all fields. His speed and aggressiveness on the bases has ticked up to the point that he comfortably projects to steal double-digit bags. The only thing to nitpick is Rodriguez's 54.5 GB% at Double-A, but given that he was 20 years old and still slugged .546 at that level, it would be shortsighted to focus on that. Seattle brazenly prevented him from climbing too high last season by initially sending him to High-A -- a level he excelled at back in 2019 -- so we shouldn't expect them to promote him to the majors when he earns the call. That makes him a volatile option for redraft leagues and draft-and-holds, as he could realistically debut in April, May, June or July, and if he gets hurt early in the year, a 2022 debut isn't assured. In dynasty leagues, however, he is a blue chipper to build around. Read Past Outlooks
read more
RANKSFrom Preseason
#224
ADP
#

* Exit Velocity and Barrels/PA % are benchmarked against 2019 data (min 400 PA) and Hard Hit Rate is benchmarked against last season's data (min 400 PA). See here for more exit velocity/barrels stats plus an explanation of current limitations with that data set.
BB/K
0.28
BB Rate
7.3%
K Rate
26.0%
BABIP
.341
ISO
.222
AVG
.280
OBP
.342
SLG
.502
OPS
.844
wOBA
.365
Exit Velocity
91.9 mph
Hard Hit Rate
34.2%
Barrels/PA
8.6%
Expected BA
.252
Expected SLG
.457
Sprint Speed
25.3 ft/sec
Ground Ball %
45.8%
Line Drive %
18.2%
Fly Ball %
36.0%
Prospect Rankings History
View Complete Julio Rodriguez Prospect Ranking History
Advanced Batting Stats
Loading Advanced Batting Stats...
Additional Stats
Games By Position
Defensive Stats
Loading Games Played by Position...
Loading MLB Defensive Stats...
Batted Ball Stats
Loading Batted Ball Stats...
Stats Vs Upcoming Pitchers
Want more matchup stats?
View Julio Rodriguez vs. Pitcher Stats
Loading Matchup Stats...
Mariners Depth Chart
Our full team depth charts are reserved for RotoWire subscribers.
Subscribe Now
Recent RotoWire Articles Featuring Julio Rodriguez
DraftKings MLB: Thursday Breakdown
2 days ago
2 days ago
Chris Morgan’s Thursday recommendations start with Giants ace Carlos Rodon against the visiting Rockies.
MLB Barometer: 2022 All-Risers Team
4 days ago
4 days ago
Erik Halterman lists this season's All-Risers, featuring Aaron Judge, who's the first player to reach 60 homers in 21 years.
DraftKings MLB: Tuesday Breakdown
4 days ago
4 days ago
Dan Marcus previews Tuesday's DraftKings slate, making his player recommendations to help you craft an effective DFS lineup.
Fantasy Baseball Injury Report: End of Regular-Season Wrap-Up
4 days ago
4 days ago
Jeff Stotts breaks down significant injuries as the MLB regular-season winds down and he starts with Ronald Acuna, who's had a disappointing season while recovering from an ACL tear suffered last season.
AL FAAB Factor: Waiver Pickups of the Week
6 days ago
6 days ago
Erik Siegrist reviews the available talent in the AL for the last full week of the regular season and thinks Jarred Kelenic might finally be putting things together.
Past Fantasy Outlooks
2021
2020
2019
In 2019, Rodriguez established himself as a top five prospect for dynasty leagues, but 2020 was a bit of a lost season. On a rebuilding team and with zero experience above High-A, he wasn't going to debut in a 60-game season, but he also suffered a hairline fracture in his left wrist that prevented him from doing much at the alternate site. However, once the fall instructional league began, Rodriguez reminded everyone why he is the top prospect in a burgeoning Mariners system and a top three prospect in baseball. He routinely posted exit velocities north of 110 mph, which is elite, and particularly impressive for a 19-year-old who was returning from a wrist injury. Rodriguez played in the Dominican winter league and should spend the bulk of spring training in big-league camp. He projects as a huge plus in AVG, OBP and HR while adding 8-12 steals. An MLB debut this summer is possible if he forces the issue.
For Rodriguez, the normal rules do not apply. He went from the Dominican Summer League in 2018 straight to the Midwest League in 2019. That never happens. A 6-foot-4 18-year-old up against men who were 3.5 years older on average, he logged a 145 wRC+ and .198 ISO before getting promoted to High-A. He was somehow better there, cutting his K% from 22.4 to 13.9 while doing even more damage (.277 ISO). His 40.0 Hard% between the two stops put him in the company of Quad-A hitters using the juiced ball in the Pacific Coast League. As the youngest hitter in the Arizona Fall League, he hit .288/.397/.365 with a 10:8 K:BB and made a point of putting his surprising speed to work, going 4-for-5 on stolen-base attempts. While the other top AFL hitters focused on pulling the ball out in batting practice, he was hitting home runs to the opposite field with ease. A true phenom, Rodriguez is on the fast track to stardom.
The 2017 July 2 international signing class appears to be one of the better ones in recent years, and Rodriguez is a big reason why. A 6-foot-3, 180-pound right fielder with a fantasy-over-reality profile, he received a $1.75 million bonus on the strength of his monster raw power and potential for a plus hit tool. That upside was on full display in the Dominican Summer League, where he logged a 161 wRC+, .210 ISO, 11.8 BB% and 15.7 K%. A right-handed hitter, he obviously mashed lefties (1.005 OPS), but his .899 OPS against same-handed pitchers suggests he could be an everyday player. It is dangerous to get too caught up in DSL statistics, as the quality of competition is extremely low -- Rodriguez was 17 and wasn't even one of the 15 youngest hitters in the league. However, he confirmed the scouting report in his pro debut, meaning he has already been scooped up in serious dynasty leagues that allow in-season pickups.
More Fantasy News