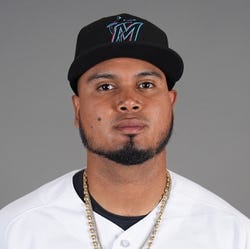 2022 Stats
AVG
.313
HR
8
RBI
48
R
83
SB
4
Rest-of-Season Projections
AVG
HR
RBI
R
SB
Unlock Our Projections
2022 Fantasy Outlook
Arraez has elite contact skills (88.8% contact rate, 2nd among hitters with 450 or more PA) and an ability to hit for average. He lacks power (0.82 ISO) and adds few steals, which limits his fantasy value. He also has a decent, but not elite glove, which has given him positional flexibility, but no set position. He entered last season as the primary utility player with the Twins intending to bat him leadoff and use him nearly every day. He got off to a slow start by hitting .277 with a .691 OPS before missing three weeks with a knee injury in June (his knees have been a frequent problem), but was back to form the rest of the season (.294 BA with .733 OPS). He improved slightly against lefties (.677 OPS vs. LH), but still has enough career platoon splits to lose playing time to southpaws. The Twins traded Josh Donaldson to the Yankees this spring, but Arraez is in line to serve as a utility infielder in 2022 after the team acquired Carlos Correa and Gio Urshela. Read Past Outlooks
read more
RANKSFrom Preseason
#346
ADP
#

* Exit Velocity and Barrels/PA % are benchmarked against 2019 data (min 400 PA) and Hard Hit Rate is benchmarked against last season's data (min 400 PA). See here for more exit velocity/barrels stats plus an explanation of current limitations with that data set.
BB/K
1.12
BB Rate
8.1%
K Rate
7.3%
BABIP
.327
ISO
.105
AVG
.313
OBP
.371
SLG
.418
OPS
.789
wOBA
.349
Exit Velocity
88.8 mph
Hard Hit Rate
27.2%
Barrels/PA
2.9%
Expected BA
.283
Expected SLG
.403
Sprint Speed
21.7 ft/sec
Ground Ball %
41.4%
Line Drive %
25.8%
Fly Ball %
32.8%
Prospect Rankings History
View Complete Luis Arraez Prospect Ranking History
Advanced Batting Stats
Loading Advanced Batting Stats...
Additional Stats
Games By Position
Defensive Stats
Loading Games Played by Position...
Loading MLB Defensive Stats...
Batted Ball Stats
Loading Batted Ball Stats...
Stats Vs Upcoming Pitchers
Want more matchup stats?
View Luis Arraez vs. Pitcher Stats
Loading Matchup Stats...
Twins Depth Chart
Our full team depth charts are reserved for RotoWire subscribers.
Subscribe Now
Recent RotoWire Articles Featuring Luis Arraez
Yahoo DFS Baseball: Wednesday Picks
12 days ago
12 days ago
Mike Barner delivers his top player recommendations for Wednesday’s Yahoo DFS slate.
FanDuel MLB: Wednesday Targets
12 days ago
12 days ago
Chris Morgan checks out Wednesday's slate as Sonny Gray and the Twins host the Royals.
Yahoo DFS Baseball: Friday Picks
24 days ago
24 days ago
Mike Barner likes the idea of rolling with Mariners rookie sensation Julio Rodriguez on Friday against the Guardians.
DraftKings MLB: Friday Breakdown
24 days ago
24 days ago
Nolan Arenado has been providing stellar output with his bat, and he's not slowing down, as over the last three weeks he has a .985 OPS.
FanDuel MLB: Tuesday Targets
27 days ago
27 days ago
Chris Bennett checks out Tuesday's slate as Max Fried welcomes the Rockies to Atlanta.
Past Fantasy Outlooks
2021
2020
2019
2017
2016
Arraez showed his strong rookie season was no fluke as he hit .321 with a .765 OPS. He has outstanding contact skills (90.2% contact rate, 4th among hitters with 100 or more PA) and an elite ability to hit for average. He lacks power, however, as he failed to homer and had just an .080 ISO, and he adds few steals with his below-average speed (42 percentile sprint speed per Baseball Savant). Arraez also struggled with knee and ankle issues which limited him to 32 games. He did improve with the glove, which was a worry for his playing time, as he ranked 13th with 1 DRS at second base. He'll need to improve against lefties (.564 OPS) to stay in the lineup and avoid being platooned. He'll move into a utility role after the Twins signed Andrelton Simmons but is expected to get regular playing time. He could see significant growth with full health as he'll turn 24 just after Opening Day.
Arraez turned what was initially expected to be a brief stay in the majors into a full-time role in the infield, unseating Jonathan Schoop for regular work at second base. His season began at Double-A before quickly getting bumped up to Triple-A. He was there for three days before getting the call for his big-league debut. Arraez has outstanding contact skills -- his 7.9 K% led MLB hitters with 300-plus PA and his 1.24 BB/K placed him second, in between Alex Bregman and Carlos Santana. He is a very difficult player to value for fantasy, as he has just 10 professional home runs in 459 games to go with a league-average sprint speed that only figures to tick down as he matures. Even so, his plate skills and ability to hit for average are already elite. Even though he is a poor defender (-8 DRS), Arraez should at least occupy the strong side of a platoon (.696 OPS vs. lefties) at second base to start the year.
Arraez hit .298 with a .710 OPS after missing all but three games in 2017 due to a torn ACL. Arraez is one of the best pure hitters in the Twins' system, but has not hit for much power or shown much speed on the bases. At 5-foot-10, 155 pounds, he doesn't project to grow into much more than 10-to-15 homer pop. His hit tool and defense will have to carry him if he is to make it as an everyday player.
Arraez, signed out of Venezuela at age 16, saw his stock continue to rise in the Twins organization after hitting .347 with an .830 OPS at Low-A Cedar Rapids. Arraez doesn't draw a ton of walks, but makes very good contact (89 percent) with a low strikeout rate (9.9 percent). He could be on the fast track to the majors with a strong season at High-A.
Arraez hit .306 in the rookie Gulf Coast League with a reasonable .320 BABIP last year, playing primarily at second base but also seeing time at third base, shortstop and left field. His approach also seems to be uniquely advanced for any player in the minor leagues, not to mention an 18-year-old. He had 20 walks and 10 strikeouts in 233 plate appearances. While he doesn't have any power at the moment (.082 ISO), his outstanding contact rate at a young age should put him on dynasty league radars. The Twins figure to keep Arraez on a slow, safe development path, but he will likely receive his first full-season assignment relatively early on in 2016.
More Fantasy News