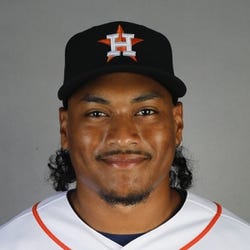 2022 Stats
W-L
15-8
ERA
3.72
WHIP
1.13
K
157
SV
0
Rest-of-Season Projections
W-L
ERA
WHIP
K
SV
Unlock Our Projections
2022 Fantasy Outlook
Garcia's first full season in the majors copped him second place in the AL Rookie of the Year voting. Houston did a good job limiting his innings by delaying his debut and giving him extended rest on a handful of occasions. Missing most of the spring on COVID-19 protocol helped the cause early. Garcia tweaked his pitch mix to feature more cutters while his control improvement was buoyed by better location of his four-seam fastball. He employs a five-pitch mix and pitches for an organization adept at adjusting to maximize effectiveness, so there is a good chance Garcia continues to improve. Garcia's flyball rate is above average, but in his case it's beneficial with so many power-suppressing parks in the AL West and his solid K-BB% to minimize traffic. Assuming the Astros loosen the reins a bit, Garcia has a chance to be a fantasy rotation anchor. Read Past Outlooks
read more
RANKSFrom Preseason
#143
ADP
#

* Exit Velocity, Barrels/BBE %, Balls Hit 95+ MPH %, and Spin Rate are benchmarked against 2019 data (min 120 IP). See here for more exit velocity/barrels stats plus an explanation of current limitations with that data set.
K/BB
3.34
K/9
9.0
BB/9
2.7
HR/9
1.3
Fastball
94.0 mph
ERA
3.72
WHIP
1.13
BABIP
.274
GB/FB
0.94
Left On Base
74.1%
Exit Velocity
82.2 mph
Barrels/BBE
5.1%
Spin Rate
2387 rpm
Balls Hit 95+ MPH
22.3%
Swinging Strike
13.5%
Prospect Rankings History
View Complete Luis Garcia Prospect Ranking History
Advanced Pitching Stats
Loading Advanced Pitching Stats...
Defensive Stats
Loading MLB Defensive Stats...
Stats Vs Today's Lineup
Want more matchup stats?
View Luis Garcia vs. Batter Stats
Loading Matchup Stats...
Astros Depth Chart
Our full team depth charts are reserved for RotoWire subscribers.
Subscribe Now
Recent RotoWire Articles Featuring Luis Garcia
Yahoo DFS Baseball: Sunday Picks
2 days ago
2 days ago
The surprisingly affordable Jose Ramirez is one of Chris Morgan's targets for his Sunday Yahoo MLB lineups.
MLB Picks Today: Expert MLB Bets for Sunday, October 2
2 days ago
2 days ago
Walter Hand likes Kevin Gausman and the Blue Jays against the struggling Red Sox on Sunday. Visit RotoWire for more MLB Picks all season.
NL FAAB Factor: Waiver Pickups of the Week
2 days ago
2 days ago
Jan Levine concludes his column for the season with a look at the remaining schedule while also offering potential stash candidates.
FanDuel MLB: Sunday Targets
2 days ago
2 days ago
Chris Morgan has offered a couple promising value plays, including Bryan Reynolds facing Adam Wainwright and the playoff-locked Cardinals.
Collette Calls: Scoring Tweaks
4 days ago
4 days ago
Jason Collette advocates for more experimentation with scoring setups in order to give fantasy relevance to a larger pool of pitchers.
Past Fantasy Outlooks
2021
2020
The 24-year-old Venezuelan made his big-league debut last season and didn't look out of place despite never having pitched above High-A. Garcia's fastball has gained velocity since signing in 2017 and averaged 94 mph last season, with the kind of spin rate you'd expect from an Astros hurler, and minor-league reports from 2019 suggest he's capable of even more heat. He leaned on a changeup as his primary offspeed offering against lefties and a slider/cutter combo against righties, mixing in an occasional curveball, and the depth of his arsenal bodes well for his chances of starting down the road as opposed to winding up in the bullpen. His short-arm delivery might suggest otherwise, but the Astros have every incentive to keep developing him as a rotation option, with Zack Greinke and Lance McCullers both free agents after this year.
Among MiLB pitchers who threw at least 100 innings, Garcia ranked first in K% (38.1) and fourth in K-BB% (26.8). He was a bit of an unknown coming into the year, and while his performance was loud in 2019, he remains under the radar. Garcia signed as a 20-year-old for just $20,000 out of Venezuela in 2017. He has added fastball velocity each year, with his heater sitting in the mid-90s in 2019. His short arm action, shaky third-pitch changeup and 12.4 BB% at High-A lead many evaluators to peg him for a relief role, but he should continue developing as a starter as long as the results are promising. This is not a pop-up arm getting by solely on deception or one great offspeed pitch. Garcia has has a couple plus or better pitches and held lefties and righties to a sub-.600 OPS. It's possible he could take another step forward with his secondaries and his command this year.
More Fantasy News