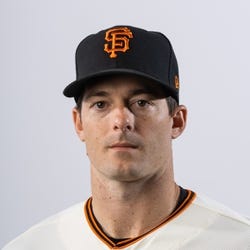 2022 Stats
AVG
.214
HR
17
RBI
57
R
73
SB
5
2023 Projections
AVG
HR
RBI
R
SB
Unlock Our Projections
2023 Fantasy Outlook
Yastrzemski came on to the league as an older prospect who joined in on the bouncy baseball fun of 2019, but then backed it up with an even better pandemic season in 2020 before coming back to earth each of the past two seasons. San Francisco believes there is at least another season there as they gave him a one year deal to avoid arbitration rather than non-tender him so he will stay in the bay area to play the strong side of a platoon situation with whatever righty bat the club plugs into play to face lefties. Yaz is rather accepting of his walks and has excellent plate discipline built around some swing and miss as he has struggled with breaking balls each of the past two seasons. His numbers could improve if he could rediscover some of his earlier success against non-fastballs, but the past two seasons have left us wondering if that will ever happen again for him. Read Past Outlooks
read more
RANKS
#

* Exit Velocity and Barrels/PA % are benchmarked against 2019 data (min 400 PA) and Hard Hit Rate is benchmarked against last season's data (min 400 PA). See here for more exit velocity/barrels stats plus an explanation of current limitations with that data set.
BB/K
0.43
BB Rate
10.9%
K Rate
25.3%
BABIP
.261
ISO
.177
AVG
.214
OBP
.305
SLG
.392
OPS
.697
wOBA
.309
Exit Velocity
89.9 mph
Hard Hit Rate
32.5%
Barrels/PA
7.0%
Expected BA
.220
Expected SLG
.392
Sprint Speed
22.6 ft/sec
Ground Ball %
34.4%
Line Drive %
19.4%
Fly Ball %
46.2%
Advanced Batting Stats
Loading Advanced Batting Stats...
Additional Stats
Games By Position
Defensive Stats
Loading Games Played by Position...
Loading MLB Defensive Stats...
Batted Ball Stats
Loading Batted Ball Stats...
Stats Vs Upcoming Pitchers
Want more matchup stats?
View Mike Yastrzemski vs. Pitcher Stats
Loading Matchup Stats...
Giants Depth Chart
Our full team depth charts are reserved for RotoWire subscribers.
Subscribe Now
Recent RotoWire Articles Featuring Mike Yastrzemski
Yahoo DFS Baseball: Thursday Picks
70 days ago
70 days ago
Mike Barner delivers his best picks for assembling a winning Yahoo DFS lineup Thursday.
FanDuel MLB: Wednesday Targets
71 days ago
71 days ago
Chris Morgan looks over Wednesday's slate as Mike Trout and the Angels host the Athletics.
DraftKings MLB: Wednesday Breakdown
78 days ago
78 days ago
Chris Bennett kicks off his Wednesday picks with Mariners lefty Robbie Ray down in Oakland.
Yahoo DFS Baseball: Wednesday Picks
78 days ago
78 days ago
Mike Barner recommends checking out a Dodgers bat stack Wednesday against Madison Bumgarner and the Diamondbacks.
FanDuel MLB: Wednesday Targets
78 days ago
78 days ago
Chris Morgan looks over Wednesday's slate as Robbie Ray tries to shut down the A's in Oakland.
Past Fantasy Outlooks
2022
2021
2020
Yastrzemski sat against some southpaws, but 24% of his plate appearances came against lefthanders. In his first two seasons, Yastrzemski hit lefties slightly better, but last season he slashed .170/.254/.259 in that scenario. To be fair, he also slipped versus righthanders, but not to the extent against lefties. Southpaws fed Yastrzemski more breaking balls and off-speed stuff last season and responded with a .088 BABIP compared to over .400 his first two campaigns. Oddly, Yastrzemski's contact and exit velocity were in line with prior season; his BABIP simply cratered. While this bodes well for a rebound, reverting to 2019 and 2020 levels is optimistic. Overall, Yastrzemski's contact and power skills are stable, but he's been subject to batted ball whims. He's also older than many perceive as he'll turn 32-year-old in August. Draft for power, but don't expect a full batting average rebound.
Even as the grandson of a Hall of Famer, Yastrzemski has had his doubters, but he quieted those doubters with a brilliant 2020 season. Yastrzemski finished seventh among MLB hitters in fWAR (2.7) and finished as OF15 in rotisserie leagues. He was far more patient at the plate than he was during his rookie season, cutting his Swing% from 47.1% to 38.9% and upping his walk rate from 7.8% to 13.3%. It's great to see that even as he was taking more pitches, he was still all over the hittable pitches that were in the strike zone. His Statcast numbers are all over the map as Yastrzemski ranked in the bottom 40th percentile in hard-hit rate and the expected stats say he was out over his skis, but at the same time his xwOBA and xSLG were in the top 20% of the league. He is already 30 and not a great athlete, but Yastrzemski is now the face of the Giants and the recent changes at Oracle Park have helped offense.
Yastrzemski finally broke into the majors in 2019 after being traded from the Orioles to the Giants prior to the season. The outfielder got off to a slow start following his promotion in May, but he found his groove after the All-Star break and posted a 136 wRC+ over 70 second-half games. Yastrzemski's 21 homers -- which came in just 371 at-bats -- tied for most on the Giants, while his .852 OPS and 121 wRC+ led all players on the team with at least 200 plate appearances. Although Yastrzemski could stand to improve his approach (7.8 BB%, 26.0 K%), his strong batted-ball profile suggests his success is for the most part believable. Yastrzemski was shielded pretty heavily against lefties in his debut season, though he performed well enough in his limited opportunities (.943 OPS in 89 PA) to potentially earn more at-bats against southpaws in 2020. Either way, he should remain a fixture in the lineup.
More Fantasy News