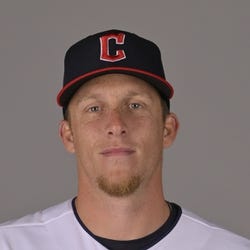 2022 Stats
AVG
.221
HR
0
RBI
32
R
72
SB
21
2023 Projections
AVG
HR
RBI
R
SB
Unlock Our Projections
2023 Fantasy Outlook
After an encouraging 2021, Straw's 2022 line left a sour taste in the mouth. He failed to hit a home run in 596 plate appearances, and he slashed just .221/.291/.273. He still boasts solid plate discipline after posting a 9.2 percent walk rate and career-best 14.6 strikeout rate, and the speed remained prevalent with 21 stolen bases and a 94th percentile sprint speed (per Statcast). The big problem with Straw now is that he was seemingly surpassed by Steven Kwan for the leadoff spot -- Straw hit mainly ninth for the last four months of the campaign. The Guardians aren't short on outfield prospects that could provide a more well-rounded game, though his defense and his contract should keep him involved in the team's plans. It's a null point if he can bat .250 and get on base at a .325 clip, but year-to-year consistency hasn't been his strong suit. Read Past Outlooks
read more
RANKSFrom Preseason
#

* Exit Velocity and Barrels/PA % are benchmarked against 2019 data (min 400 PA) and Hard Hit Rate is benchmarked against last season's data (min 400 PA). See here for more exit velocity/barrels stats plus an explanation of current limitations with that data set.
BB/K
0.62
BB Rate
9.1%
K Rate
14.6%
BABIP
.261
ISO
.052
AVG
.221
OBP
.291
SLG
.273
OPS
.564
wOBA
.259
Exit Velocity
87.0 mph
Hard Hit Rate
24.7%
Barrels/PA
0.5%
Expected BA
.236
Expected SLG
.301
Sprint Speed
24.4 ft/sec
Ground Ball %
47.2%
Line Drive %
19.1%
Fly Ball %
33.7%
Prospect Rankings History
View Complete Myles Straw Prospect Ranking History
Advanced Batting Stats
Loading Advanced Batting Stats...
Additional Stats
Games By Position
Defensive Stats
Loading Games Played by Position...
Loading MLB Defensive Stats...
Batted Ball Stats
Loading Batted Ball Stats...
Stats Vs Upcoming Pitchers
Want more matchup stats?
View Myles Straw vs. Pitcher Stats
Loading Matchup Stats...
Guardians Depth Chart
Our full team depth charts are reserved for RotoWire subscribers.
Subscribe Now
Recent RotoWire Articles Featuring Myles Straw
MLB Dynasty Rankings + 10 Rookies for 2023
12 days ago
12 days ago
James Anderson links to his fresh update to the dynasty rankings and profiles 10 rookies he is targeting for 2023, including top prospect Corbin Carroll.
Yahoo DFS Baseball: Tuesday Picks
48 days ago
48 days ago
Mike Barner's Tuesday Yahoo recommendations include both Game 5 of the ALDS and Game 1 of the NLCS.
FanDuel MLB: Monday Targets
49 days ago
49 days ago
Anthony Rizzo is Chris Morgan’s MVP pick for Monday’s Game 5, the final game of the division series between Cleveland and the Yankees.
The Z Files: NFBC Holdem Rankings and Strategies
56 days ago
56 days ago
Todd Zola shares his gameplan and his rankings for NFBC Postseason Holdem contests.
Collette Calls: Buckle Up
59 days ago
59 days ago
Jason Collette is excited for the increase in steals which the new rules should bring next season. Which hitters and pitchers will be affected the most?
Past Fantasy Outlooks
2022
2021
2020
2019
2018
It was tough to know what to think of Straw coming into the season after he struggled in 2020 (.500 OPS, .049 ISO). Straw was on everyone's fantasy radar after stealing 72 bases in 2018, but he wouldn't stay in the majors with a .500 OPS. He answered the call by raising his OBP and SLG by 100 points to post a .700 OPS. It would be nice if he hit a bit better, but it was enough to stay in the lineup in order to steal 30 bases and score 86 runs while playing for Houston and Cleveland. As long he continues to hit, the stolen bases should continue and there is the chance he develops some more power. A sub-.100 ISO and 2.5% HR/FB will limit his upside. He might be that best late source of stolen bases for fantasy managers with certain team builds, but he comes with the risk of reverting to his 2020 self. If a manager needs Straw for stolen bases, they've backed themselves into a corner in the draft.
Most of Straw's time on the field in 2020 came when George Springer was injured. The speedy outfielder did not do much with his at-bats, posting an anemic 39 wRC+, though he did swipe six bags in eight tries. Not only did Straw fan a career-worst 25.6% of the time, but he also walked at just a 4.4% clip, well below the double-digit level he displayed throughout his minor-league career. Straw's game is speed, so diminished plate skills hurt him more than others; his chances to steal are limited by a .244 OBP. Even with Springer leaving as a free agent, Straw is unlikely to be deployed as a lineup regular throughout 2020. Straw's lack of power relegates him to AL-only status on draft day, but he could be an in-season mixed-league pickup as an injury replacement.
Tim Locastro was the only player in MLB in 2019 who had a faster sprint time from home to first than Straw. By average sprint speed, only Locastro, Trea Turner and Byron Buxton were faster in 2019. Straw can absolutely fly and stole 70 bases in the minors between Double-A and Triple-A in 2018. Last year, he was 27-for-32 between Triple-A and the majors in 122 games. The last thing a pitcher wants to do is walk this guy, but they still do as Straw has had a double-digit walk rate in all but one stop on his climb to the major leagues. This is Billy Hamilton, but a version of Hamilton that does not get the bat knocked out of his hands. Straw does not have power, but handles the bat well enough to make good opposite-field contact to get on base. The deep roster limits him to the bench, but Straw can still provide 15-20 steals over the course of the season.
Straw was promoted to the majors in mid-September, hitting a homer and swiping two bases over just 10 plate appearances. That power isn't real, as the homer was just the fourth of his four-year professional career, but the speed certainly is. He'd already stolen 70 bases in the minors last season before his callup, and he was included on the Astros' postseason roster almost exclusively for his wheels. That speed should certainly interest fantasy owners, but steals are much more valuable in fantasy than reality, and if a player can't do much else, he won't get much playing time. Don't write off Straw completely, as he's still 24 with room to grow, but a .257/.349/.317 line in 66 Triple-A games and a complete lack of power give little reason to believe he'll carve out a significant role on Houston's loaded roster in 2019.
Straw appears interesting on paper, but he profiles as a fourth or fifth outfielder long term and is unlikely to reach the majors this season. He is a threat on the bases (81 steals in 111 minor-league attempts), but his complete lack of power will hold him back. His opposite-field approach (45.8 percent at High-A) is great for a player who wants to hit a bunch of singles, but he doesn't do damage when he hits the ball. He should open the year at Double-A and could make his major-league debut (possibly in another organization) in 2019.
More Fantasy News