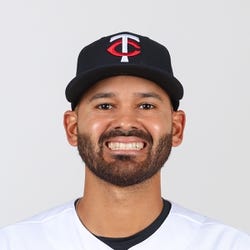 2022 Stats
W-L
10-10
ERA
3.75
WHIP
1.17
K
174
SV
0
2023 Projections
W-L
ERA
WHIP
K
SV
Unlock Our Projections
2023 Fantasy Outlook
Pa-Lo answered the health concerns we highlighted last season as he took the ball all 32 times it was given to him and was one of 27 pitchers to throw at least 180 innings on the season. Yet, 2022 was a bit of a disappointment in his outcomes as he won 10 of the 32 starts for the struggling Miami club while his ERA jumped three quarters of a run from the previous season and his strikeout rate fell four percentage points. He was still tough to hit and stingy with baserunners, but his upside is still limited by the misfortunes of the Miami offense. Lopez and Kyle Wright were extremely similar from a statistical profile this past season, yet Wright had 21 wins and a 3.19 ERA thanks to 5.3 runs per game while Lopez was supported with just 3.2 runs per outing. There is nothing wrong with the pitcher, rather, the surrounding cast is limiting his true fantasy upside. Read Past Outlooks
read more
RANKSFrom Preseason
#

* Exit Velocity, Barrels/BBE %, Balls Hit 95+ MPH %, and Spin Rate are benchmarked against 2019 data (min 120 IP). See here for more exit velocity/barrels stats plus an explanation of current limitations with that data set.
K/BB
3.28
K/9
8.7
BB/9
2.7
HR/9
1.1
Fastball
93.6 mph
ERA
3.75
WHIP
1.17
BABIP
.290
GB/FB
1.59
Left On Base
73.1%
Exit Velocity
81.2 mph
Barrels/BBE
5.1%
Spin Rate
2113 rpm
Balls Hit 95+ MPH
22.5%
Swinging Strike
13.2%
Advanced Pitching Stats
Loading Advanced Pitching Stats...
Defensive Stats
Loading MLB Defensive Stats...
Stats Vs Today's Lineup
Want more matchup stats?
View Pablo Lopez vs. Batter Stats
Loading Matchup Stats...
Marlins Depth Chart
Our full team depth charts are reserved for RotoWire subscribers.
Subscribe Now
Recent RotoWire Articles Featuring Pablo Lopez
2023 Fantasy Baseball Rankings - Way Too Early Top 300 Draft Ranks
42 days ago
42 days ago
James Anderson provides a way too early top 300 rankings for those who have the itch to start drafting for 2023.
Sorare MLB: Welcome Home, Ketel
62 days ago
62 days ago
Todd Zola shares his experiences navigating through Sorare's new MLB game. Will the addition of Ketel Marte help Todd's long-term build?
FanDuel MLB: Tuesday Targets
65 days ago
65 days ago
Chris Bennett checks out Tuesday's slate and thinks Aaron Judge's salary has fallen enough to get back on board as he hunts for homer No. 61.
MLB Bets at DraftKings Sportsbook: MLB Player Props and Picks for Tuesday, September 27
65 days ago
65 days ago
Mike Barner breaks down his best MLB bets at the DraftKings Sportsbook with a mix of wagers and player props to target.
Weekly Pitcher Rankings: And Then There Was One
68 days ago
68 days ago
Robbie Ray tops Todd Zola's weekly pitcher rankings thanks to a pair of home matchups against a pair of struggling opponents.
Past Fantasy Outlooks
2022
2021
2020
2019
Lopez is the type of pitcher that can make or break a fantasy team. He absolutely has front-of-the-rotation stuff, highlighted by one of the best changeups in baseball. He is quite capable of throwing any one of his five pitches to both righties and lefties and putting it where he needs to put it. The league hit below .235 against four of his five offerings and only took him yard 11 times on the season. He has improved his K-BB% each of his four seasons in the majors, and his WHIP has improved in a similar pattern. The only question mark with Lopez is health because he has yet to demonstrate it over the course of a full season. He went down in his final outing before the break with shoulder tightness and did not make it back on the mound until the final day of the season. Lopez has yet to work even 115 innings in any professional season, so you can't draft him as an ace.
The Marlins were one of the best stories in baseball last season, and their impressive corps of young starters -- which includes Lopez -- was a big reason for their success. Lopez had a couple clunkers in early September, but he still managed a 3.09 FIP during the regular season, ranking 15th among all pitchers who threw at least 50 innings. He bumped his strikeout rate up to 24.6%, a number supported by a healthy 35.1 O-Swing% and 12.1 SwStr% (per FanGraphs). The right-hander works mostly four-seam fastball-sinker-changeup, which is a mix conducive to generating groundballs and weak contact. His curveball showed flashes of coming along as a put-away pitch last season, although it got crushed when he left it out over the heart of the plate. Lopez has not hurt himself with walks with a career 6.6 BB% at the big-league level. There is real upside here although the cat's already out of the bag in many circles.
The right-hander made his debut for the Marlins in 2018, and after becoming the talk of the Grapefruit League last spring, earned a spot in the Opening Day rotation. Lopez put together a solid first half (4.23 ERA and 1.12 WHIP) before going down with a shoulder strain, which sidelined him for over two months. He struggled in seven starts after coming off the IL with a 7.01 ERA. Lopez had a 20.3 K% and 5.8 BB% and mixes in a curveball and changeup to go with his 94-mph fastball. His numbers don't jump off the page, and he could be hurt some by the Marlins moving in the fences, but he is only entering his age-24 season, so we should not consider him a finished product. He could get by as a low-WHIP groundball pitcher even if his strikeout rate doesn't significantly improve. If he can come anywhere near his first-half numbers from last season he should see consistent innings for Miami.
Lopez hadn't pitched above High-A prior to the 2018 season, but a series of good starts in the high minors saw him promoted to the big leagues in late June. He performed competently in 10 starts for the struggling Marlins, recording a 4.14 ERA before being shut down with a shoulder strain in early September. His greatest strength thus far in his professional career has been his ability to avoid walks -- his 7.3% walk rate in his debut was good, though he'd actually kept his walk rate at 5.0% or below at each of his minor-league stops. His 18.6% strikeout rate wasn't particularly impressive, however, leaving him looking like a back-end starter. It's unclear if he'll have a chance to fill out the Marlins' rotation from the start of this season, but his pitcher-friendly home park will make him a decent deep-league streaming option when called upon.
More Fantasy News