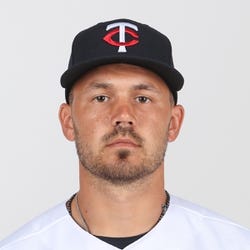 Out
Injury Abdomen
Est. Return 2/1/2023
2022 Stats
AVG
.231
HR
5
RBI
18
R
22
SB
0
2023 Projections
AVG
HR
RBI
R
SB
Unlock Our Projections
2023 Fantasy Outlook
Larnach looked set to be an impact hitter in the lineup as he was hitting .299 with a .890 OPS over the first two months sandwiched around a stint on the injured list for a groin injury. He fell apart in June by hitting .127 and later that month needed core muscle surgery. He returned to Triple-A in late September and is expected to be ready for Opening Day. He has a sweet left-handed swing with plus power, but will need to reduce his strikeouts (31.7%). His lack of contact (64.4%) makes him prone to long slumps though he draws walks (10.0 BB%) at a good rate. He has limited defensive ability as corner outfielder, so his bat will need to force himself into the lineup. He'll compete for major league role this spring and could factor as a reserve or in a platoon role. The 2018 first-round draft pick has 30-plus home run potential if he can make more contact. Read Past Outlooks
read more
RANKSFrom Preseason
#

* Exit Velocity and Barrels/PA % are benchmarked against 2019 data (min 400 PA) and Hard Hit Rate is benchmarked against last season's data (min 400 PA). See here for more exit velocity/barrels stats plus an explanation of current limitations with that data set.
BB/K
0.32
BB Rate
10.0%
K Rate
31.7%
BABIP
.320
ISO
.175
AVG
.231
OBP
.306
SLG
.406
OPS
.712
wOBA
.311
Exit Velocity
90.1 mph
Hard Hit Rate
37.1%
Barrels/PA
6.7%
Expected BA
.227
Expected SLG
.442
Sprint Speed
24.6 ft/sec
Ground Ball %
41.9%
Line Drive %
19.0%
Fly Ball %
39.0%
Prospect Rankings History
View Complete Trevor Larnach Prospect Ranking History
Advanced Batting Stats
Loading Advanced Batting Stats...
Additional Stats
Games By Position
Defensive Stats
Loading Games Played by Position...
Loading MLB Defensive Stats...
Batted Ball Stats
Loading Batted Ball Stats...
Stats Vs Upcoming Pitchers
Want more matchup stats?
View Trevor Larnach vs. Pitcher Stats
Loading Matchup Stats...
Twins Depth Chart
Our full team depth charts are reserved for RotoWire subscribers.
Subscribe Now
Recent RotoWire Articles Featuring Trevor Larnach
2023 Fantasy Baseball Rankings - Way Too Early Top 300 Draft Ranks
46 days ago
46 days ago
James Anderson provides a way too early top 300 rankings for those who have the itch to start drafting for 2023.
MLB: Five Underrated Hitters For The Stretch Run
117 days ago
117 days ago
Corbin Young highlights five underrated hitters who should help out in specific categories down the stretch.
AL FAAB Factor: Waiver Pickups of the Week
148 days ago
148 days ago
Erik Siegrist checks out the waiver options in the American League as the Angels' Reid Detmers hopes his third time in the majors is the charm.
MLB: One Man's Trash... (Week 11)
165 days ago
165 days ago
Jeff Zimmerman looks at the players being dropped across the fantasy baseball world. Is it time to move on from Toronto starter Yusei Kikuchi?
FanDuel MLB: Friday Targets
185 days ago
185 days ago
Chris Bennett jumps into Friday’s 12-game slate, recommending a Rays bat stack against the White Sox.
Past Fantasy Outlooks
2022
2021
2020
2019
Larnach struggled in his first taste of the majors as the 2018 first-round draft pick had difficulty making contact despite prodigious power. He showed promise after he was recalled in May by hitting seven home runs with a .775 OPS in his first 47 games. He fell into a long slump in the second half by hitting .167 with a .480 OPS before demoted in August. He has a sweet left-handed swing with plus power, but will need to reduce his strikeouts (34.6%) and show more promise against left-handed pitchers (.525 OPS). He has limited defensive ability as corner outfielder, so his bat will need to force himself into the lineup. He'll likely need to right himself at Triple-A before getting another chance, but could factor as a reserve or in a platoon role right away with a strong spring. He still has upside as a three-category anchor who hits around .260 with 30-plus home runs.
If the only aspect of evaluating prospects for fantasy was triple-slash line potential with the assumption of everyday at-bats, Larnach would be ranked quite a bit higher. However, he fits best in left field, where he still projects to be a below-average defender, and he won't be a threat on the bases. He is an imposing 6-foot-4 slugger who struck out 27.6 percent of the time as a 22-year-old at Double-A in 2019. Larnach is a good hitter for his size, given his plus-plus all-fields power, but strikeouts will probably always be a part of the package, given his long levers. This all puts a lot of pressure on Larnach to do a ton of damage at the plate in order for him to just be a 2- or 3-win player. He should debut this summer and his sweet left-handed swing should keep him in the majors for a long time. The most likely good outcome is a three-category anchor who hits around .260 with 30-plus home runs.
He has not put up jaw-dropping counting stats, but Larnach has been consistently dominant at every full-season stop. In 2018, he logged a 149 wRC+ at Low-A and followed that up with a 148 wRC+ at High-A and Double-A (48% better than a league-average hitter). He has had an Oppo% over 30% and a GB% under 49% at every stop and owns a 10.6 BB% against full-season pitching. The skill set seemed incredibly stable until he struck out 27.6% of the time at Double-A, up from 20.5% at High-A. For a 22-year-old who is a near lock to get double-digit starts at designated hitter every year, Larnach needs to have a pretty airtight offensive profile to be a real asset. The left-handed slugger has plus raw power but has not been able to get to it consistently in games. Given the Twins' organizational depth chart, Larnach is unlikely to reach the majors this year unless he dominates in the upper levels.
Where a player gets drafted is part of the story, but often just a small part when it comes to dynasty-league value. Case in point: Larnach, an Oregon State outfielder the Twins selected with the No. 20 pick in the 2018 draft, might be the best fantasy asset from that class. He projects as a fringe-average defender in an outfield corner, but his bat has a chance to be special. Larnach handled the Appy League with ease (139 wRC+), lacing balls to all fields while walking almost as much as he struck out. He didn't slow down after a promotion to Low-A, notching a 0.65 BB/K, .209 ISO and 149 wRC+ -- marks that would have ranked in the top seven in the Midwest League among qualified hitters. Despite standing 6-foot-4, 210 pounds, Larnach covers the entire plate with a beautiful left-handed swing, displaying easy plus power. He won't be much of a threat on the bases by the time he reaches the majors, but could hit .300 with 30-plus homers in his peak seasons.
More Fantasy News