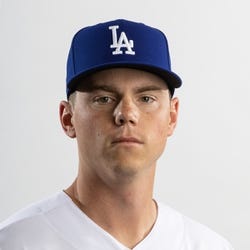 2022 Stats
AVG
.260
HR
24
RBI
87
R
68
SB
1
2023 Projections
AVG
HR
RBI
R
SB
Unlock Our Projections
2023 Fantasy Outlook
Perhaps no player in baseball is in a more favorable position than Smith. He was the primary cleanup hitter for a 111-win Dodgers team last season, batting behind the likes of Mookie Betts, Trea Turner and Freddie Freeman. Smith held up his end of the bargain with 24 homers and 87 RBI across 578 total plate appearances. He shaved nearly four points off his strikeout rate from his first full season in the majors and the bat is arguably worthy of more DH starts in the years to come (24 starts as the designated hitter in 2022). The rigors of catching make it tough for any backstop to stay healthy over the entire season, year-in and year-out, but Smith has now cleared 500 plate appearances in back-to-back campaigns. The batted-ball metrics, while not elite, largely support his outstanding results. Read Past Outlooks
read more
RANKSFrom Preseason
#

* Exit Velocity and Barrels/PA % are benchmarked against 2019 data (min 400 PA) and Hard Hit Rate is benchmarked against last season's data (min 400 PA). See here for more exit velocity/barrels stats plus an explanation of current limitations with that data set.
BB/K
0.58
BB Rate
9.7%
K Rate
16.6%
BABIP
.276
ISO
.205
AVG
.260
OBP
.343
SLG
.465
OPS
.807
wOBA
.351
Exit Velocity
89.9 mph
Hard Hit Rate
32.7%
Barrels/PA
7.4%
Expected BA
.257
Expected SLG
.473
Sprint Speed
23.7 ft/sec
Ground Ball %
31.7%
Line Drive %
21.2%
Fly Ball %
47.1%
Prospect Rankings History
View Complete Will Smith Prospect Ranking History
Advanced Batting Stats
Loading Advanced Batting Stats...
Additional Stats
Games By Position
Defensive Stats
Loading Games Played by Position...
Loading MLB Defensive Stats...
Batted Ball Stats
Loading Batted Ball Stats...
Stats Vs Upcoming Pitchers
Want more matchup stats?
View Will Smith vs. Pitcher Stats
Loading Matchup Stats...
Dodgers Depth Chart
Our full team depth charts are reserved for RotoWire subscribers.
Subscribe Now
Recent RotoWire Articles Featuring Will Smith
2023 Fantasy Baseball Rankings - Way Too Early Top 300 Draft Ranks
46 days ago
46 days ago
James Anderson provides a way too early top 300 rankings for those who have the itch to start drafting for 2023.
Closer Encounters: 2022 Saves in Review, Part 2
48 days ago
48 days ago
Ryan Rufe recaps the saves landscape in this year's NFBC Main Event and shares his own hits and misses from this past season.
Closer Encounters: 2022 Saves in Review, Part 1
54 days ago
54 days ago
Ryan Rufe recaps this past season's saves landscape. Just how many teams preferred closer committees over the conventional approach?
FanDuel MLB: Tuesday Division Series Targets
55 days ago
55 days ago
Chris Bennett looks over Tuesday's divisional-round slate and thinks it's worth finding the cap room for Justin Verlander.
The Z Files: NFBC Holdem Rankings and Strategies
56 days ago
56 days ago
Todd Zola shares his gameplan and his rankings for NFBC Postseason Holdem contests.
Past Fantasy Outlooks
2022
2021
2020
Smith made a statement upon arrival to the majors and has quickly established himself among the top handful of catchers in the league. He's done it by hitting about 25 homers over a full season with an acceptable batting average (career .262). He's had two short seasons and one full one so far and the results have been consistent. While his flyball approach will limit his batting average (career 29.6 GB%), he keeps getting on base with an 11.5 BB%. He has major upside if/when the league implements the designated hitter in the National League. Instead of having to rest on his off days from catching, he can fill in as the DH. Smith has the talent to be the league's top catcher and the big difference between him and the catchers being taken after him is that he can make a huge difference by season's end.
Smith began the season in a timeshare with Austin Barnes. On Aug. 14, he was placed on the IL with a sore neck, slashing just .188/.341/.406 at the time. There were signs Smith would snap out of it as he was only fanning at a 12.2% clip while walking at a 19.5% pace to that point. Smith was back in action after the minimum stay and things began to click. The backstop slashed .329/.427/.646 after returning, playing nearly every day by season's end. He led all catchers over 100 PA with a 163 wRC+, supported by a Statcast ranking in the pertinent categories of at least 80th percentile, most 88th or higher. Smith will be challenged to match that over a full season, and needs to work on his framing, but he's still one of best hitting catchers in the league, slotting in the meat of the Dodgers' lineup. Despite subpar defense, a case can be made for Smith being the second-best catcher in fantasy.
Austin Riley is the first to come to mind when thinking of players who started hot upon arrival before fading, but Smith followed a similar path. After getting the call to be the Dodgers' primary backstop in late July, Smith went off for nine homers in 19 games, driving in 25 runs in 62 at-bats. He then hit .183/.277/.305 over his final 26 regular-season games and ended his year by going 1-for-13 in the NLCS. Smith's strong strikeout rate from Triple-A did not carry over, as he fanned at a 26.5% clip with the major-league team, though it's important to note that Smith has a history of making adjustments and cutting down on his K-rate in his second go at a level. A first-round pick in 2016, Smith has always been able to take a walk and he's a plus behind the plate. There's upside here but downside too, as the Dodgers may not be patient if Smith starts in a similar fashion to how he finished 2019.
More Fantasy News