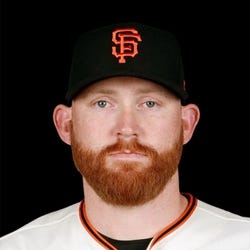 * Exit Velocity, Barrels/BBE %, Balls Hit 95+ MPH %, and Spin Rate are benchmarked against 2019 data (min 30 IP). See here for more exit velocity/barrels stats plus an explanation of current limitations with that data set.
K/BB
3.00
K/9
7.9
BB/9
2.6
HR/9
1.6
Fastball
94.5 mph
ERA
5.08
WHIP
1.38
BABIP
.317
GB/FB
1.13
Left On Base
72.3%
Exit Velocity
82.4 mph
Barrels/BBE
3.7%
Spin Rate
2012 rpm
Balls Hit 95+ MPH
22.5%
Swinging Strike
12.8%
Advanced Pitching Stats
Loading Advanced Pitching Stats...
Defensive Stats
Loading MLB Defensive Stats...
Stats Vs Today's Lineup
Want more matchup stats?
View Zack Littell vs. Batter Stats
Loading Matchup Stats...
Giants Depth Chart
Our full team depth charts are reserved for RotoWire subscribers.
Subscribe Now
Recent RotoWire Articles Featuring Zack Littell
Closer Encounters: 2022 Closer Rankings 2.0
257 days ago
257 days ago
Ryan Rufe updates his closer rankings as fantasy drafts hit the home stretch. How much does the needle move on Blake Treinen?
The Z Files: Setting Up Better Staffs
November 8, 2021
November 8, 2021
Todd Zola takes a look at the impact of changes in pitcher usage on fantasy staffs and finds it's becoming increasingly necessary to roster top middle relievers such as Devin Williams.
Playoff Primer: The Rankings
October 5, 2021
October 5, 2021
Todd Zola ranks players by position for fantasy playoff leagues. Chicago's Jose Abreu is tough to beat at first base.
MLB FAAB Factor: Waiver Pickups of the Week
August 19, 2021
August 19, 2021
Jason Shebiske looks at some midweek free-agent targets as Evan Longoria returns to provide a boost to the Giants' lineup.
NL FAAB Factor: Waiver Pickups of the Week
August 15, 2021
August 15, 2021
The pennant races are heating up and Jan Levine profiles a couple contenders who may soon be seeing some decent producers back in their lineups.
Past Fantasy Outlooks
2022
2020
2019
Littell was happy to turn the page from an extremely small sample in 2020, when he surrendered five home runs in only 6.1 innings of work. In contrast, Littell recorded a 2.92 ERA and 1.14 WHIP across 61.1 frames in 2021. Part of that success can be attributed to increased velocity, as he averaged 95 mph on his fastball for the first time in his career. In turn, he posted a career-best 13.3% swinging-strike rate and 25 K%. Perhaps most importantly, Littell was able to keep the ball in the yard in 2021 (1.0 HR/9), something that has caused him problems in past seasons and could continue to be an issue due to his relatively heavy flyball lean. Looking ahead to 2022, Littell is unlikely to join the closer mix without significant injuries and struggles to others in the Giants' bullpen. Nevertheless, he has proven capable of turning in solid ratios with some strikeouts and could be relevant in NL-only leagues as well as deeper mixed leagues that reward holds.
Littell improved in his second season with the Twins and could carve out a steady role in the Minnesota bullpen. The 2013 11th-round draft pick -- now with his third organization -- found success at Triple-A and was productive in the majors as well with more of a strikeout punch than he showed in his 2018 stint. He had a 3.71 ERA and 25.7 K% at Triple-A Rochester. That success had him shuttled up and down from Triple-A to add depth to Minnesota's bullpen before he closed out the season in the majors in September. With the Twins, he improved his velocity (93.8 mph average fastball), reduced his walks (6.2%) and kept the ball in the park (0.97 HR/9). He'll need to improve his strikeout rate in the majors to be an impact reliever. Continued progress could lead to a steady role in middle relief.
Littell was a lightly-regarded 11th-round draft pick on his third organization before finding success at Triple-A with the Twins last season, which resulted in a late-season promotion to the majors. He had a 3.57 ERA and decent 8.3 K/9 at Triple-A. Littell struggled in the majors with a 6.20 ERA and just a 6.2 K/9. He has had command issues in the minors (3.4 BB/9 at Triple-A) and those issues were magnified in the majors (4.9 BB/9). He generates some groundballs (43.7%) and has average velocity (91.9 mph), but isn't outstanding enough in any area to project much upside. He'll likely just add rotation depth at Triple-A or work in low-leverage spots out of the bullpen, where he could add a couple ticks to his fastball.
More Fantasy News