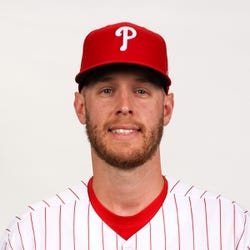 2022 Stats
W-L
11-7
ERA
2.92
WHIP
1.06
K
156
SV
0
Rest-of-Season Projections
W-L
ERA
WHIP
K
SV
Unlock Our Projections
2022 Fantasy Outlook
Wheeler's 2.92 ERA in 2020 represented a career low, but it was reasonable to doubt its repeatability given that it came in a shortened season and was paired with a career-low 18.4 K%. Rather than having his ERA rise to match his peripherals in 2021, he instead improved his ERA again to 2.78, and this time it looked fully deserved. He took a massive step forward in his strikeout rate, which came in at a career-high 29.1%, while cutting his walk rate to a career-low 5.4% and maintaining a solidly above-average 49.8% groundball rate. No other pitcher who threw at least 100 innings met all three of those rate stats, and only Clayton Kershaw came within two percentage points of all three. There's some risk here in that Wheeler has only pitched at this level once, and he's heading into his age-32 season, but that all-around excellence means he can fall off a fair amount and still remain quite good. There's some injury concern following last year's heavy workload as he dealt with shoulder soreness during the offseason, resulting in a delayed start to spring training. Wheeler won't be ready for Opening Day but isn't expected to miss much time beyond that, though it's worth keeping an eye on his status throughout the spring. Read Past Outlooks
read more
RANKSFrom Preseason
#31
ADP
#