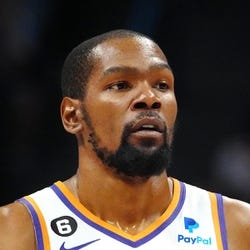 2022 Stats
PTS
29.9
REB
6.6
AST
5.4
STL
0.7
BLK
1.8
ROS Projections
PTS
REB
AST
STL
BLK
Unlock Our Projections
2022 Fantasy Outlook
Durant was the talk of the town this offseason, demanding a trade off the Nets in early August, something that has since been rescinded. From a fantasy perspective, Durant is coming off another strong season in which he compiled 29.9 points, 7.4 rebounds, 6.4 assists, 0.9 steals, 0.9 blocks and 2.1 three-pointers per game. Those numbers were good enough to see him end the campaign as the second-best player in fantasy basketball on a per-game basis in eight-category leagues. Now seemingly locked in with the Nets, Durant feels like a relatively safe target. Although the team has added some depth pieces, such as T.J. Warren and Royce O'Neale, Durant is clearly still going to demand the ball, and along with Kyrie Irving, he forms one of the best one-two punches in the NBA. With the team pushing hard for an NBA title, Durant should be able to replicate his 2021-22 production, placing him firmly at the top of draft boards as a top-five target. From there, managers will need to cross their fingers that he can stay relatively healthy throughout the season. Read Past Outlooks
read more
Height 6'10"
Weight 240
DOB 9/29/1988
College Texas
Drafted 1st Rd, #2 in 2007
$Signed a four-year, $194.22 million contract extension with the Nets in August of 2021.
Personal Bio/PreCareer Summary

Kevin Wayne Durant was born in 1988 in Washington D.C. He is the son of Wanda Durant and grandson of Barbara Davis. Durant grew up in Prince George's County, Maryland, just outside of D.C. Durant would attend three different high schools: he spent his freshman and sophomore seasons at National Christian Academy, his junior year at Oak Hill Academy and transferred to Montrose Christian School as a senior. After Durant's senior season, he was named the Washington Post All-Met Basketball Player of the Year and was the Most Valuable Player at the 2006 McDonald's All-American Game. He would then move on the University of Texas for one year before turning pro. His nicknames include "KD", "Durantula" and "Slim Reaper". KD was a member of both the 2012 and 2016 USA Gold Medal Olympic teams. As a member of the Thunder in 2013, he donated $1 million to the Oklahoma Red Cross to help those affected by the May tornadoes. The 6-foot-10 All-Star is a big fan of the Washington Redskins and enjoys crab legs. Fans can follow the two-time NBA Finals MVP on Twitter @KDTrey5 and on Instagram @easymoneysniper. Kevin Durant attended the University of Texas for one year. During the 2006-07 collegiate season, Durant averaged 25.8 points, 11.1 rebounds, 1.9 steals and 1.9 blocks for the Longhorns. He started all 35 games in which he appeared. Durant scored 20-plus points in 30 games and 30-plus points 11 times. KD earned National Player of the Year honors from The Associated Press, NABC, USBWA, CBS/Chevrolet and The Sporting News. The lengthy forward was named the winner of the Adolph Rupp Trophy, the Naismith Award and the Wooden Award, becoming the first-ever freshman in NCAA history to win any of those awards. The Longhorn earned consensus First Team All-American honors, becoming just the third freshman in NCAA history at that time to earn that honor.