This article is part of our The Stats Room series.

What a difference a week makes. Last week, nothing went right. This week, everything seems better, especially with the quarterbacks. Besides going over the results, I have gone down several wormholes this week and have made some decent discoveries.

First off, a little note on projections. They can vary greatly and owners should have an idea on the variation between projections and the results. For instance, here are the actual quarterback results (95 percent range) grouped by rounded projected results (a bit lower because of injured quarterbacks). 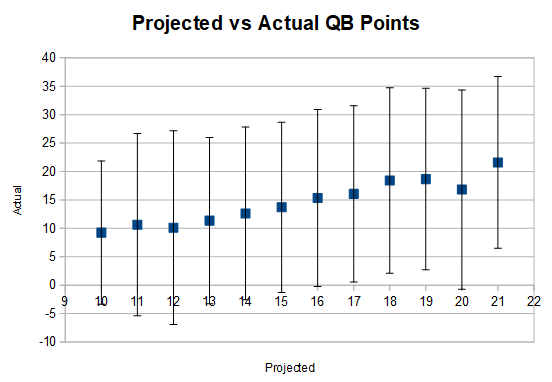 I'm not sure what the most important takeaway is from the data but several pieces are important. First, my projection's range of possible outcomes (at the 95 percent level) is +/- 15 points. A quarterback projected for 15 points is most like to produce somewhere between zero and 30 points. At that range, 100 percent guesswork may be an option for most owners. Hopefully, I can improve these results.

Second, after comparing my values to the standard RotoWire projections, the range of outputs for my values is within the industry norm. With most other projections likely having a similar outcome range, I can see why creators don't brag up their results. Their projections could be the best in the industry, but they're still not acceptably accurate.

Third, and most important, owners might not want to know the inherent risk of each player. They just want to go with their best team and not know their results mostly tied to inherent variation.

Want to Read More?
Subscribe to RotoWire to see the full article.

We reserve some of our best content for our paid subscribers. Plus, if you choose to subscribe you can discuss this article with the author and the rest of the RotoWire community.