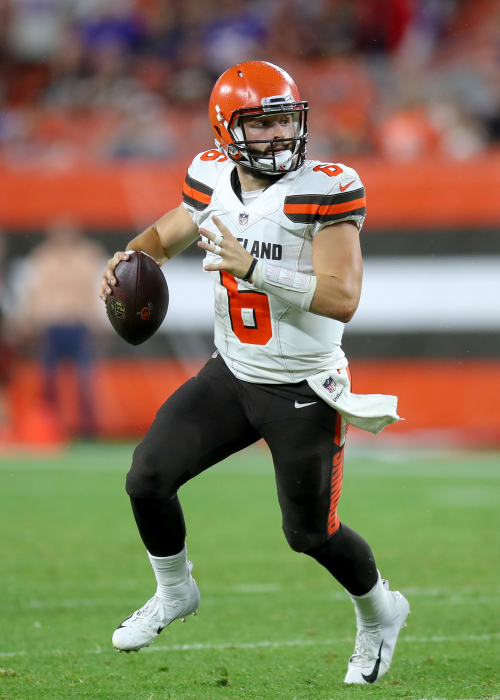 2020 Pass/Rush Stats
YDS
3563
TD
26
INT
8
YDS
165
TD
1
2021 Pass/Rush Projections
YDS
TD
INT
YDS
TD
Unlock Our Projections
2020 Fantasy Outlook
Coming off an outstanding rookie year, Mayfield looked poised to break out last season. Not only did that not happen, but Mayfield sunk to the bottom of the NFL quarterback pool. He ranked 31st in completion percentage (59.4), 31st in interception percentage (3.8), 31st in passer rating (78.8), 30th in bad-pass percentage (23.6) ... and the list goes on. While he certainly played poorly at times, it wasn't all his fault, as a bad offensive line, injuries to key players and questionable game plans dragged him down. It was enough to get coach Freddie Kitchens fired at season's end. New coach Kevin Stefanski, Mayfield's fourth head coach in three seasons, was the offensive coordinator last year for a Vikings team that ranked third in rushing percentage (49.1) and whose quarterback, Kirk Cousins, attempted only 444 passes. But Stefanski was operating under head coach Mike Zimmer's run-first mandate, and while he plans to bring at least the principles of that offense with him, it's unclear if that means Mayfield is destined to lose 100 or so attempts. In any event, Stefanski's zone blocking/play-action scheme should open throwing lanes for Mayfield and widen the pocket. And new offensive coordinator Alex Van Pelt said he plans to alter Mayfield's footwork to be more fluid and less robotic. The team also moved to shore up the offensive line by signing RT Jack Conklin and drafting LT Jedrick Wills 10th overall. And Mayfield again has plenty of weapons. Odell Beckham and Jarvis Landry had offseason surgeries, but are expected to be healthy for Week 1. Free-agent addition Austin Hooper joins David Njoku at TE, and the backfield might be the league's best with Nick Chubb and Kareem Hunt. Maybe Year 3 will be Mayfield's breakout season. Read Past Outlooks
read more
RANKS
#130.5
ADP
#

QBCleveland Browns
Read More News
NFL Stats
Loading NFL Stats...
Fantasy/Red Zone Stats
See red zone opportunities inside the 20, 10 and 5-yard lines along with the percentage of time they converted the opportunity into a touchdown.
Loading Fantasy/Red Zone Stats...
Advanced NFL Stats
How do Baker Mayfield's 2020 advanced stats compare to other quarterbacks?
This section compares his advanced stats with players at the same position. The bar represents the player's percentile rank. For example, if the bar is halfway across, then the player falls into the 50th percentile for that metric and it would be considered average. The longer the bar, the better it is for the player.
Bad Pass %
19.5%
Avg Target Depth
8.7 Yds
Sack Rate
5.1%
Avg Receiver YAC
4.5 Yds
Receiver Drop %
5.3%
Loading Advanced NFL Stats...
2020
2019
2018
2020 NFL Game Log

Browns
View Full Depth Chart
2020 Baker Mayfield Split Stats
Loading NFL Split Stats...
Measurables Review View College Player Page
How do Baker Mayfield's measurables compare to other quarterbacks?
This section compares his draft workout metrics with players at the same position. The bar represents the player's percentile rank. For example, if the bar is halfway across, then the player falls into the 50th percentile for that metric and it would be considered average.
Height
6' 1"
Weight
215 lbs
40-Yard Dash
4.84 sec
Shuttle Time
4.28 sec
Cone Drill
7.00 sec
Vertical Jump
29.0 in
Broad Jump
111 in
Hand Length
9.25 in
Arm Length
30.25 in
Recent RotoWire Articles Featuring Baker Mayfield
Best Ball Journal: It's Tournament Time!
7 days ago
7 days ago
Jerry Donabedian breaks down his strategy for a best-ball tournament, building a team around Alvin Kamara, Michael Thomas and a couple other Saints.
NFL Breakout Watch: First Look at the 2021 Candidates
11 days ago
11 days ago
The Eagles aren't likely to reach the playoffs in 2021, but they should be an interesting team for fantasy purposes, rebuilding around Jalen Hurts and Dallas Goedert on offense.
Best Ball Journal: Diving into 2021 with a Chiefs Stack
14 days ago
14 days ago
Jerry Donabedian dives into 2021 NFL best ball, picking 12th in his first draft of the year. With running backs flying off the board in the early rounds, there was value to be had at QB and WR.
2021 NFL Offseason Guide: Free Agents, Cap Casualties & Draft Capital
21 days ago
21 days ago
Jerry Donabedian reads offseason tea leaves for every NFL team, including an up-and-coming Chargers squad that needs to make tough decisions on Hunter Henry and Mike Williams.
Divisional Round Observations
42 days ago
42 days ago
Tom Brady is now one win away from his 10th Super Bowl appearance.
Past Fantasy Outlooks
2019
2018
The No. 1 pick in last year's draft, Mayfield debuted Week 3 and took over the starting job the following week. His big break came when the Browns fired offensive coordinator Todd Haley entering Week 9, replacing him with running backs coach Freddie Kitchens. In six games under Haley, Mayfield completed 58.3 percent of his passes with 6.6 YPA and eight touchdowns. In eight games under Kitchens, those numbers jumped to 68.4 percent, 8.6 YPA and 19 TDs, sparked by success throwing the deep ball. In Weeks 9-17, on attempts longer than 20 yards, Mayfield posted a 14.7 TD percentage (2nd), 17.8 YPA (3rd) and 108.5 passer rating (6th). For the season, his 9.4-yard average depth of target ranked fifth in the league. The offseason addition of Odell Beckham Jr. could take Mayfield and the Cleveland offense to the next level this year under Kitchens, now the head coach but still the playcaller, with former Buccaneers assistant Todd Monken the new offensive coordinator. Jarvis Landry returns to man the slot, with young wideouts Rashard Higgins and Antonio Callaway showing promise and tight end David Njoku perhaps on the verge of a breakout. Meanwhile, Kareem Hunt will join Nick Chubb in the backfield at midseason after serving an eight-game suspension. In short, Mayfield is set up for big success.
The first overall pick in the draft, Mayfield enters training camp as the backup to Tyrod Taylor. How long that remains the hierarchy is uncertain, despite coach Hue Jackson's proclaimed belief in Taylor. Perhaps Jackson is timid about another rookie starter after last year's debacle with DeShone Kizer, but Jackson has won a single game in two years, so if there's a coach in America who's apt to play the QB who gives him the best shot at winning, it's Jackson. Mayfield was highly accurate in college, has a strong arm and throws an excellent deep ball. At 6-1, 215, he doesn't have ideal height, but his batted-pass stats were excellent in college and, according to scouts, he processes information quickly and has the mobility to escape pressure. The Browns retooled their skill positions this offseason, adding Jarvis Landry and Antonio Callaway to a wideout group that hopes to finally have Josh Gordon for a full season. They also signed Carlos Hyde and drafted Nick Chubb to join Duke Johnson in the backfield. Better still, the offense now belongs to coordinator Todd Haley, who occupied the same role in Pittsburgh the last six years. Jackson will no longer call plays, and that will benefit whoever is under center.
More Fantasy News