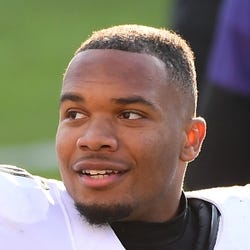 2022 Rush/Rec Stats
ATT
7
YDS
23
TD
0
YDS
17
TD
0
Rest-of-Season Projections
ATT
YDS
TD
YDS
TD
Unlock Our Projections
2022 Fantasy Outlook
An ACL tear before Week 1 ruined what might have been a breakout campaign for Dobbins, the first in a series of injuries to the Ravens backfield in 2021. A second-round pick in 2020 out of Ohio State, Dobbins was eased into a prominent role as a rookie, but by the end of his first year in the NFL he looked like a stud in the Baltimore system, finding the end zone in seven straight games and finishing with 6.0 yards per carry. He showed above-average speed and power, and his 2.9 yards after contact per carry (third in the league) demonstrated how difficult he was to bring down in open space. Everything in the Ravens' scheme keys off Lamar Jackson, of course, but Dobbins has the tools to make defenses pay dearly if they over-commit to the QB rushing threat. And while the Ravens have used committee backfields throughout Jackson's time as the starting quarterback, Dobbins (2020) and Mark Ingram (2019, 15 TDs) showed that there's touchdown upside for the top guy. Dobbins still figures to be that, albeit a year late, ahead of Gus Edwards (also returning from an ACL tear), discount free-agent-signing Mike Davis and sixth-round rookie Tyler Badie. It's still Jackson's show, but perhaps with more emphasis on the run game now that Dobbins is returning and WR Marquise Brown is a Cardinal. Read Past Outlooks
read more
RANKS
#81.22
ADP
#

@ Patriots
Sunday, Sep 25th at 1:00PM
Overall QB Rating Against
90.3
Cornerbacks
94.4
Safeties
80.1
Linebackers
95.0
Loading Opponent Pass Defense Stats...
2022 J.K. Dobbins Split Stats
Loading NFL Split Stats...
Measurables Review View College Player Page
How do J.K. Dobbins' measurables compare to other running backs?
This section compares his draft workout metrics with players at the same position. The bar represents the player's percentile rank. For example, if the bar is halfway across, then the player falls into the 50th percentile for that metric and it would be considered average.
Height
5' 10"
Weight
212 lbs
Broad Jump
0 in
Bench Press
23 reps
Hand Length
9.50 in
Arm Length
29.75 in
Recent RotoWire Articles Featuring J.K. Dobbins
Gameday Injuries: Week 3
Yesterday
Yesterday
Juan Carlos Blanco breaks down the latest as of early Sunday morning on another robust NFL injury landscape in Week 3.
Week 3 Friday Injury Report: Kittle Cleared, Herbert Questionable, Bills Defense Depleted
3 days ago
3 days ago
A lot of star players are listed as questionable this week, but George Kittle isn't one of them.
NFL Game Previews: Cowboys-Giants Matchup
4 days ago
4 days ago
Erik Siegrist analyzes the Monday night matchup as Daniel Jones leads the Giants against the Cowboys.
Weekly Rankings: Week 3 Value Meter
6 days ago
6 days ago
Will Amon-Ra St. Brown reprise this play against the Vikings in Week 3?
Backfield Breakdown: Week 2 RB Usage Recap & Week 3 Waivers
7 days ago
7 days ago
Cam Akers didn't do much with his touches, but increased involvement does suggest he isn't a total lost cause for fantasy this year.
Past Fantasy Outlooks
2021
2020
Through the first six weeks of his rookie season last year, Dobbins was mostly buried on the depth chart, watching from the sideline as Mark Ingram and Gus Edwards handled most of the carries. The second-round pick did find the end zone twice in his NFL debut, but he didn't see double-digit carries in a game during that initial stretch. Following Baltimore's bye, Dobbins began to push Ingram out of the picture - starting with a Week 8 eruption for 113 yards against the Steelers - and by the end of the year those touchdowns were a weekly occurrence. Dobbins is an athletic runner with power and speed, and he was among the toughest players in the NFL for the initial tackler to bring down, finishing fourth among all RBs with an average of 2.9 yards after contact, a number comparable to the likes of Derrick Henry, Aaron Jones and Nick Chubb. Unfortunately, a preseason torn ACL has derailed Dobbins' second season as a pro, which paves the way for Edwards to head the Ravens' backfield. The silver lining for Dobbins is the early timing of his injury, as he'll have a full year to recover before Week 1 of 2022.
A three-year starter at Ohio State, Dobbins is a chiseled 5-9, 209, with enough strength to punish tacklers and more than enough speed to run past them. While a nagging ankle injury kept him from fully participating at the combine, his workouts as an 18-year-old coming out of high school were eye-popping (he ran a 4.45 40, and his 43.1-inch vertical would have been second highest by a college RB since 2006). He also flashed plenty of breakaway speed at Ohio State, leading the nation last season with 31 runs of 15-plus yards. Dobbins even showed some ability as a receiver and pass protector, cementing his status as a potential three-down option in the NFL. This season, he'll likely be part of a backfield committee for Baltimore, which drafted him 55th overall. The Ravens led the league with 596 rush attempts last season and set a NFL record with 3,296 rushing yards, but it was quarterback Lamar Jackson who led the way with 37 percent of the yardage and a third of the touchdowns, leaving Mark Ingram, Gus Edwards and Justice Hill with a combined 393 carries for 1,954 yards and 14 TDs. That's still big-time production, no doubt, but it'll be tough for Dobbins to take more than half of the pie as a rookie, considering Ingram, Edwards and Hill remain on the roster.
More Fantasy News