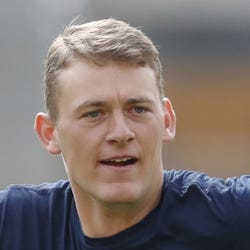 2022 Pass/Rush Stats
YDS
1963
TD
7
INT
7
YDS
88
TD
1
Rest-of-Season Projections
YDS
TD
INT
YDS
TD
Unlock Our Projections
2022 Fantasy Outlook
The 15th overall pick last year, Jones won the starting job in training camp and turned in a promising rookie season. He was the fifth QB drafted but outpaced his fellow rookies in passing yards, TD passes and completion percentage. Jones delivered as expected with his ability to read defenses and manage a game, but his lack of arm strength was apparent in his downfield passing. While he went downfield at a good clip (11.9 percent), his on-target rate was just 41.9 percent (26th) on attempts of 20-plus yards. Likewise, Jones’ lack of mobility and athleticism led to rushed mechanics vs. the blitz where he ranked 24th in on-target percentage (67.7) with the third most interceptions (five). Jones did not get much help from a lackluster wideout crew, but the Patriots traded for DeVante Parker this offseason and spent a second-round pick on Tyquan Thornton, who ran a 4.28 40 at the combine. Quality tight ends Hunter Henry and Jonnu Smith return, as does leading receiver Jakobi Meyers. Offensive coordinator Josh McDaniels is now in Las Vegas, and the Patriots, as of press time, have not announced if Joe Judge or Matt Patricia will be the new OC. Either way, the offense doesn’t figure to look drastically different, though perhaps it will give Jones more attempts than the 30.6 (21st) he averaged last year. He'll need them to improve his fantasy value, considering he offers next to nothing as a runner. Read Past Outlooks
read more
RANKS
#173.97
ADP
#

QBNew England Patriots
Read More News
NFL Stats
Loading NFL Stats...
Fantasy/Red Zone Stats
See red zone opportunities inside the 20, 10 and 5-yard lines along with the percentage of time they converted the opportunity into a touchdown.
Loading Fantasy/Red Zone Stats...
Advanced NFL Stats
How do Mac Jones' 2022 advanced stats compare to other quarterbacks?
This section compares his advanced stats with players at the same position. The bar represents the player's percentile rank. For example, if the bar is halfway across, then the player falls into the 50th percentile for that metric and it would be considered average. The longer the bar, the better it is for the player.
Bad Pass %
21.5%
Avg Target Depth
7.5 Yds
Sack Rate
8.5%
Avg Receiver YAC
5.6 Yds
Receiver Drop %
3.7%
Loading Advanced NFL Stats...
2022
2021
2022 NFL Game Log

Patriots
View Full Depth Chart
This Week's Opposing Pass Defense
How does the Bills pass defense compare to other NFL teams this season?
The bars represents the team's percentile rank (based on QB Rating Against). The longer the bar, the better their pass defense is. The team and position group ratings only include players that are currently on the roster and not on injured reserve. The list of players in the table only includes defenders with at least 3 attempts against them.

vs Bills
Thursday, Dec 1st at 8:15PM
Overall QB Rating Against
72.8
Cornerbacks
78.6
Safeties
76.9
Linebackers
61.8
Loading Opponent Pass Defense Stats...
2022 Mac Jones Split Stats
Loading NFL Split Stats...
Measurables Review View College Player Page
How do Mac Jones' measurables compare to other quarterbacks?
This section compares his draft workout metrics with players at the same position. The bar represents the player's percentile rank. For example, if the bar is halfway across, then the player falls into the 50th percentile for that metric and it would be considered average.
* All metrics are from his Pro Day (not the combine).
Height
6' 3"
Weight
217 lbs
40-Yard Dash
4.82 sec
Shuttle Time
4.39 sec
Cone Drill
7.04 sec
Vertical Jump
32.0 in
Broad Jump
116 in
Hand Length
9.75 in
Arm Length
32.63 in
Recent RotoWire Articles Featuring Mac Jones
Monkey Knife Fight: Thursday Night Football Picks
4 days ago
4 days ago
Mike Barner analyzes the Thursday night Monkey Knife Fight DFS contests. Take the under on Rhamondre Stevenson's projected rushing yards.
NFL DFS Picks: Yahoo Plays and Strategy for Week 13 Sunday Baller
4 days ago
4 days ago
Sasha Yodashkin digs into the Week 13 slate and recommends you don't overlook Nick Chubb against a vulnerable Texans run defense.
NFL Game Previews: Saints-Buccaneers Matchup
4 days ago
4 days ago
Erik Siegrist analyzes the Monday night matchup as Tom Brady and the Bucs take on the Saints in a key NFC South showdown.
Thursday Night Football DFS Breakdown: New England vs. Buffalo
4 days ago
4 days ago
With no Damien Harris available Rhamondre Stevenson might need to play upwards of 60 snaps Thursday.
NFL Week 13 Odds, Picks, Predictions and Best Bets for Every Game
5 days ago
5 days ago
John McKechnie analyzes the betting odds for NFL Week 13 and lines up his best bets against the spread and on the total for every game this week.
2021 Fantasy Outlook
Jones was the fifth QB selected in the first round of this year's draft. He was a highly accurate passer at Alabama, setting an NCAA record for completion percentage (77.4) last season while throwing 41:4 TD:INT. Scouts laud his anticipation and ability to read defenses, but Jones' arm is below average, and he lacks mobility and athleticism. No matter, he won a summer battle against Cam Newton, prompting the Patriots to release their veteran quarterback at the end of the preseason. Jones now enters Week 1 as the starter, with Nelson Agholor, Jakobi Meyers, Hunter Henry, Jonnu Smith and James White serving as his top pass catchers.
More Fantasy News