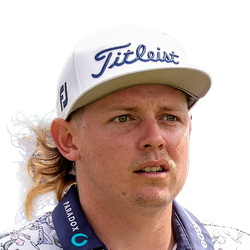 2021–22 Stats
Rank
20
Winnings
$10,107,898
Winnings/Entry
$561,550
Entries
18
Rounds
66
2022–23 Fantasy Outlook
Smith has agreed to join LIV Golf after much speculation for months. This is probably the hardest loss the PGA Tour has had to this point as Smith is still an ascending star at age 29 and is coming off an incredible season that saw him with the Tournament of Champions at 34-under-par, The Players Championship with a crazy final round, and the Open Championship at St Andrews with a Sunday 64. Smith will be exempt for all majors for the next five years, but we might not see him play a PGA Tour run event ever again. Even playing just four times, Smith is talented enough to still turn a decent earnings haul, especially at the Masters where he owns four top-10 finishes in the last five years. Read Past Outlooks
read more
Handedness Right
Status Pro
Height 5'11"
Weight 172 lbs
DOB 8/18/1993
Birthplace Brisbane, Australia
Country Australia
Read More News
PGA Stats
Loading Golf Stats...
Tournament Results
Scoring
FanDuel
DraftKings
Loading Tournament Log...
PGA Advanced Stats
Loading Advanced Stats...
Recent RotoWire Articles Featuring Cameron Smith
Weekly Preview: Fortinet Championship
18 days ago
18 days ago
The 2022-23 PGA Tour season kicks off this week, which means there are lineups to fill and bets to be made. Find out why Greg Vara suggests going with Sahith Theegala in a number of different formats.
2022-23 Golf Draft Kit: Rankings & Profiles
23 days ago
23 days ago
RotoWire's golf writers run down their rankings for the 2022-23 season, and you won't have to look far down the list to find Rory McIlroy.
2022-23 Golf Draft Kit: Projected Earnings
23 days ago
23 days ago
Scottie Scheffler ended last season atop the Official Money list, and RotoWire's golf staff expects him to make another run at the top spot during the upcoming campaign.
2022-23 Golf Draft Kit: Majors Preview and Predictions
24 days ago
24 days ago
Few things affect fantasy leagues more than the four major championships. Find out which one Ryan Andrade expects Jon Rahm to take down, and also who he expects to win the other three.
Past Fantasy Outlooks
2022
2020
2019
2018
2017
2016
Smith has always had a load of talent, but until 2020-21 he hadn't put it all together. Smith had two wins on the PGA Tour entering 2020-21, but he never accomplished anything near what he did last season. In addition to a win at the Zurich Classic, Smith also posted two runner-up finishes and eight top-10s total. Smith should continue his ascent up the ranks of the PGA Tour, but he set the bar too high in 2020-21. As such, Smith will remain a solid second round option in draft leagues, but a poor salary cap selection this season.
Smith appears to have a lot of talent, but he's been unable to find much consistency in his five years on the PGA Tour. He did pick up his second career win this past season, but out side of that win, there wasn't much to get excited about. Still, the upside remains high and if he can find more consistency, like he did in 2018, he could be in for a big season. His cap number is fairly high though, so the only reason to take him in a salary cap format is if you believe that breakout is imminent.
Smith struggled out of the gate in his rookie in 2016, but he quickly turned it around the following season when he earned his first victory and over $2 million. He followed that up with an even better season in 2018 as he picked-up three 3rd-place finishes and over $3 million in earnings. It looked like he was trending upward heading into this past season, but something went wrong. Smith's production fell off dramatically this past season, but it's too early to panic. Smith is just 25 and he has loads of talent. He's a steal at this price in salary cap leagues and should be on a lot of roster this season.
Smith has had a bit of an odd journey to get to this point on the PGA Tour. He earned his card by playing well as a non-member in 2015, but his game left him the following season as a PGA Tour rookie. He found his game the following season when he earned over $2 million and expectations were high entering last season. He wasted no time living up to those expectations as he earned five top-6 finishes in his first 12 starts last season. Smith's game oddly left him though over a five-start stretch where he failed to make a single cut. He regained his form at the end of the season however as he picked-up consecutive 3rd-place finishes to start the FedEx Cup Playoffs. Smith should continue to improve this season and his price tag is in a decent spot for salary cap purposes.
Smith made the most of his limited status last year as he won the Zurich Classic in April, which secured his card for the upcoming season. The question with Smith, as with all younger golfers who win early is -will he get complacent or will he take his game to the next level. Early after his win, it looked like complacency was setting in, but he finished the season strong, which would indicate that he's ready to hit the ground running this season. The problem is, he set the bar pretty high last season and as such, he's not a great salary cap selection for the upcoming season.
The young Aussie took a step back in his second season on tour, but that's not uncommon. He did not have a top-10 in his 24 starts and finished 157th in points. It's entirely possible the 23-year-old contends for a playoff berth in 2016-17.
More Fantasy News