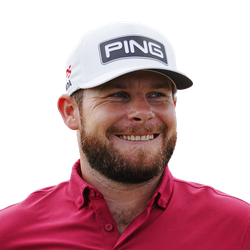 2021–22 Stats
Rank
51
Winnings
$2,849,791
Winnings/Entry
$149,989
Entries
19
Rounds
68
2022–23 Fantasy Outlook
Hatton is a strange case in that he's one of these European Tour players that came to the PGA Tour with a lot of hype and for the most part he's lived up to it, but he's yet to really break through over here. He's posted three consecutive seasons of $2+ million in earnings and he's consistently making many cuts than he's missing, but it feels like he's got more in him. He's failed to win during the past two seasons, but his second PGA Tour win seems inevitable. If he picks up a win this season, he'll easily eclipse his earnings number from this past season, if not, he should at least get back to where he was this past season, making him a fairly safe play. Read Past Outlooks
read more
Handedness Right
Status Pro
Height 5'9"
Weight 161 lbs
DOB 10/14/1991
Birthplace High Wycombe, England
Country England
Read More News
PGA Stats
Loading Golf Stats...
Tournament Results
Scoring
FanDuel
DraftKings
Loading Tournament Log...
PGA Advanced Stats
Loading Advanced Stats...
Recent RotoWire Articles Featuring Tyrrell Hatton
Weekly Recap: Fortinet Fortitude
12 days ago
12 days ago
The cards were stacked against him late on Sunday, but when it was all said and done, Max Homa walked away with a season-opening win for the second year in a row.
2022-23 Golf Draft Kit: Rankings & Profiles
23 days ago
23 days ago
RotoWire's golf writers run down their rankings for the 2022-23 season, and you won't have to look far down the list to find Rory McIlroy.
2022-23 Golf Draft Kit: Projected Earnings
23 days ago
23 days ago
Scottie Scheffler ended last season atop the Official Money list, and RotoWire's golf staff expects him to make another run at the top spot during the upcoming campaign.
FanDuel PGA: Wyndham Championship Picks and Strategy
60 days ago
60 days ago
Find out why Ryan Andrade recommends rolling with Russell Henley in this week's contests on FanDuel.
DraftKings PGA: Wyndham Championship Picks and Strategy
60 days ago
60 days ago
A rested Shane Lowry leads off Len Hochberg's list of golfers to go after in this week's contests on DraftKings.
Past Fantasy Outlooks
2022
2020
2019
2018
2017
Hatton really established himself during the 2019-20 season as one of the best players in the world. There were high expectations for 2020-21 with the Englishman playing more of a full schedule on the PGA Tour. Hatton was solid, but his numbers in all areas took a bit of a hit. His ball-striking was still pretty solid, ranking top-15 in SG: tee-to-green, but he just didn't convert on the greens the way he had done earlier in his career. Hatton should be much closer to that $3,000,000 range in 2021-22.
Hatton did not make that many starts on the PGA Tour in 2019-20, but when he did tee it up he was almost always a factor. His numbers were quite impressive ranking top-30 in both SG: Putting and SG: Tee-to-green, which put him inside the top 10 on Tour in SG: Total. Hatton also led in birdie average. The Englishman has shown he can be a consistent winner and is heading into the prime of his career at age 28.
Hatton is one of the better golfers from Europe, but like many of his predecessors, he's yet to produce on the PGA Tour like he had on the European Tour. That's not to say that his stint on this side of the pond has been a failure though. He's played well in his two seasons on the PGA Tour, but more is expected from him. The issue for Hatton, like many Euros, is the number of events he plays each season. He's played only 16 in each of the past two season and while they are generally bigger events, unless he breaks through at one of them, he'll have a hard time significantly increasing upon his number from last season.
Hatton was the latest in a string of European Tour regulars to give it a try on the PGA Tour and he fared rather well in his first season. More often than not, the Euro Tour to the PGA Tour experiment fails, but Hatton has enough game to make it work. Hatton had four top-10s in 16 starts, but only one top-5 last season. Hatton actually left a lot out there and he probably would have fared better had he had more experience playing on the PGA Tour. That won't be an issue this year as he'll be more familiar with his routine this season and that should result in better overall numbers. The problem is the number of events he'll play. He only played 16 last season and there's no reason to expect anything different this season. Hatton's floor should be right about where he finished last season and his ceiling could be as high as double what he made last season.
Hatton had a great six weeks last season with four consecutive top-10s worldwide, starting with a T3 at the Dubai Desert Classic in February before sandwiching T4s at the Honda Classic and the Arnold Palmer around a T10 at the WGC-Mexico Championship. He tacked another top-20 at the WGC-Match Play (T17) event a week later. But then things turned sour as he missed five of eight cuts on the PGA Tour, including trunk slams at all four majors, and three of five on the European Tour. His only bright spot was a T3 at the season-ending European Masters. That one great run, though, was enough to earn him a 2017-18 tour card as he totaled 448 non-Member FedEx Cup points, the equivalent to 99th on the FedEx Cup points list.
More Fantasy News