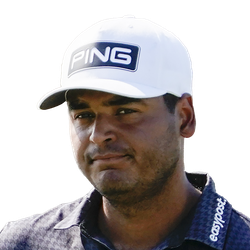 2022–23 Stats
Rank
136
Winnings
$107,670
Winnings/Entry
$26,918
Entries
4
Rounds
14
2022–23 Fantasy Outlook
Muñoz has really been on the grind since picking up his first win on the PGA Tour during the 2019-2020 season. During that season, Muñoz not only picked up his first win, but he also carded five total top-10s on his way to nearly $3 million in earnings. The past couple season though, he's made his money the hard way by gobbling up a bunch of top-25s, while sprinkling in some top-5s. His made cut percentage isn't great however, so it looks like he'll need some high-end finishes to improve on his numbers from this past season. Munoz ranked 58th in SG: Total and 55th in scoring average, right about where you would expect him to finish in 2022-23. Read Past Outlooks
read more
Handedness Right
Status Pro
Height 6'0"
Weight 185 lbs
DOB 1/4/1993
Birthplace Bogota, Colombia
College North Texas
Country Colombia
Read More News
PGA Stats
Loading Golf Stats...
Tournament Results
Scoring
FanDuel
DraftKings
Loading Tournament Log...
PGA Advanced Stats
Loading Advanced Stats...
Recent RotoWire Articles Featuring Sebastian Munoz
DraftKings PGA: The RSM Classic Picks and Strategy
18 days ago
18 days ago
It has been a quality fall for Jason Day, and Len Hochberg believes he could be the man of the hour in this week's contests on DraftKings.
2022 Cadence Bank Houston Open Betting: Picks, Odds, Predictions and Best Bets
25 days ago
25 days ago
Ryan Pohle runs down his favorite wagers for this week's event and explains why he is banking on a head-to-head win for Beau Hossler.
Yahoo DFS Golf: Sanderson Farms Championship Picks and Strategy
66 days ago
66 days ago
Find out why Bryce Danielson believes Wyndham Clark could be a bargain in this week's contests on Yahoo.
Past Fantasy Outlooks
2022
2020
2019
2018
2016
Munoz was able to flash a lot of ability with eight finishes in the top 20, but also did miss double digit cuts. He was just above average in all areas of his gave except short game where he lost strokes. Munoz's numbers were down across the board, however, from his strong sophomore campaign in which he finished in the top 10 of the FedEx Cup standings. A repeat of what he produced in 2020-21 seems more likely, though.
Munoz rode his maiden PGA Tour win at the second event of the season, the Sanderson Farms, all the way to the Tour Championship. It's hard to count on that again, so regression is in order. He also tied for third at the RSM, generating about 70 percent of his regular-season points from those two events. On the other hand, qualifying for so many big events, including some no-cut WGCs, will give him some "free" money to boost his total.
Munoz's first go-round on the PGA Tour ended in a spot outside the top-125, but his second attempt concluded with a better result. Munoz slid just inside the top-125 last season, which means he has his playing privileges for next season. That's the good news. The bad news is, there wasn't much to see last season from Munoz. While he managed to secure his card, his best finish was a T9 and most of his best work was done against lesser fields. Munoz is young and has time to grow, but through two seasons on the PGA Tour, he looks like guy who will continually struggle to get inside the top-125.
Munoz finished just outside of the top-150 in the FedExCup standings during the 2016-17 season, when he posted a T3 at The Greenbrier but also missed nine cuts in 17 starts. He appeared in 22 events on the Web.com Tour in 2018, notching a pair of runner-up finishes and a third-place result to ultimately come in seventh on the regular season money list. The Colombian ranked 33rd in ball striking, 24th in putting average and 14th in birdie average.
Munoz won a tournament to get inside the top 25 on the Web.com regular-season money list, but he also missed 16 of 23 cuts. That was his first foray onto the secondary tour, and he's never played a PGA Tour event. But he will now, and he'll likely experience significant growing pains.
More Fantasy News