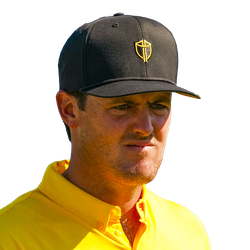 2021–22 Stats
Rank
39
Winnings
$2,797,926
Winnings/Entry
$103,627
Entries
27
Rounds
90
2022–23 Fantasy Outlook
Pereira won three times on the Korn Ferry tour during the 2020-2021 season, which meant that he joined the PGA Tour with high expectations and for the most part, those expectations were met. The highlight and lowlight of his rookie season came at the PGA Championship, where he needed only a par to win his first major, but he failed to come through. Even without a win at the PGA Championship, his season on the whole was a success. Pereira's ceiling appears to be extremely high, but there's the looming prospect of him jumping ship to the LIV Tour. If he remains on the PGA Tour, he's in for a heck of season however. Read Past Outlooks
read more
Handedness Right
Status Pro
Height 6'0"
Weight 196 lbs
DOB 3/31/1995
Birthplace Santiago, Chile
College Texas Tech
Country Chile
Read More News
PGA Stats
Loading Golf Stats...
Tournament Results
Scoring
FanDuel
DraftKings
Loading Tournament Log...
PGA Advanced Stats
Loading Advanced Stats...
Recent RotoWire Articles Featuring Mito Pereira
Weekly Recap: Presidents Cup Appraisal
3 days ago
3 days ago
Len Hochberg looks back at the U.S. Team's latest victory over the International Team in the Presidents Cup and grades the 24 golfers that took part.
DraftKings PGA: Presidents Cup Picks and Strategy
9 days ago
9 days ago
Len Hochberg gives you the lowdown on this week's DraftKings contests and tells you why to train your eyes on Jordan Spieth.
2022 Fortinet Championship Betting: Picks, Odds, Predictions and Best Bets
16 days ago
16 days ago
Ryan Pohle lists his favorite bets for the season opener and tells you why he is willing to wager on Gary Woodland winding up in the winner's circle.
DraftKings PGA: Fortinet Championship Picks and Strategy
16 days ago
16 days ago
Len Hochberg breaks down the DraftKings board for the first tournament of the new season and explains why it makes sense to lock defending champion Max Homa into your lineups.
2022-23 Golf Draft Kit: Rankings & Profiles
21 days ago
21 days ago
RotoWire's golf writers run down their rankings for the 2022-23 season, and you won't have to look far down the list to find Rory McIlroy.
Past Fantasy Outlooks
2022
2020
A three-time champion on the Korn Ferry Tour in 2020-21, Pereira's victories included back-to-back triumphs at the REX Hospital Open and the BMW Charity Pro-Am in June before his battlefield promotion to the big stage. The Chilean kept his foot on the gas all summer, notching top-6s at the Barbasol Championship and 3M Open ahead of his T4 effort at the Olympics in Tokyo. It wouldn't be surprising to see Pereira heavily in the mix for 2022 PGA Tour Rookie of the Year honors this time next year.
Pereira's trio of top-10s throughout the 2020 Korn Ferry Tour season included a win at the Country Club de Bogota Championship and a third-place result at the Panama Championship back in February. He cooled off a bit as the season wore on, but retained his position inside of the top 10 in the KFT Points list and finished fifth in par-4 scoring average.
More Fantasy News