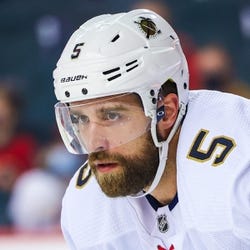 2022 Stats
G
4
A
7
PP Pts
7
+/-
-5
PIM
14
ROS Projections
G
A
PP Pts
+/-
PIM
Unlock Our Projections
2022 Fantasy Outlook
Ekblad's career year (15 goals, 57 points in 61 games) was derailed by a lower-body injury which cost him Florida's final 20 regular season games, but he made it back for Florida's 10-game playoff run and displayed no ill effects from the ailment. Ekblad's power-play time dropped 22 seconds a game from a year prior, but his 3:31 per game with the man advantage was more than enough for him to post 20 power-play points, including 17 helpers. The Panthers should once again be one of the NHL's best offensive teams again this coming year, making Ekblad a no-doubt No. 1 fantasy defenseman in any format. Read Past Outlooks
read more
#