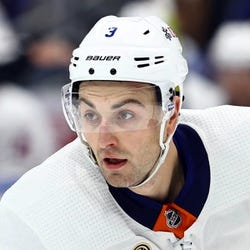 Day-To-Day
Injury Upper Body
Est. Return 12/9/2022
2022 Stats
G
3
A
8
PP Pts
0
+/-
12
PIM
24
ROS Projections
G
A
PP Pts
+/-
PIM
Unlock Our Projections
2022 Fantasy Outlook
Pelech is one of the NHL's premier shutdown defensemen, which is why the Islanders are paying a player who has never posted more than 28 points in any one year $5.75 million annually through the 2028-29 campaign. As effective as Pelech is on the ice, his game isn't conducive to fantasy production. He hasn't produced a power-play point in four years and has never had more than 110 shots on goal in any season. Toss in the fact Pelech posts mediocre hit and blocked shot numbers for a rearguard and you have a player who is a clear fade in your draft this fall. Read Past Outlooks
read more
#

Calculate Stats Over Time
Just click on any two dates.
Scoring
FanDuel
DraftKings
Yahoo DFS
FantasyDraft
Head2Head
Loading Skater Game Log...
2022–23 Time On Ice Stats
Ice Time
Power Play
Short-Handed
2020–21
21:03
0:07
2:14
2021–22
21:17
0:11
2:18
2022–23
20:49
0:09
2:56
Islanders Depth Chart
Our full team depth charts are reserved for RotoWire subscribers.
Subscribe Now
Islanders Power Play Depth Chart
Our full team depth charts are reserved for RotoWire subscribers.
Subscribe Now
Recent RotoWire Articles Featuring Adam Pelech
NHL DFS Picks: Yahoo Plays and Strategy for Thursday, November 3
36 days ago
36 days ago
Michael Finewax looks over Thursday's slate as Igor Shesterkin and the Rangers try to cool down the red-hot Bruins.
2022-23 CBS Defense Tiers
85 days ago
85 days ago
Shawn Hutchinson provides a tiered preview of this year's options at defense.
FanDuel NHL: Friday Targets
238 days ago
238 days ago
Jason Chen offers some salary savings with the Panthers' second line.
Yahoo DFS Hockey: Thursday Targets
267 days ago
267 days ago
Jordan Mazzara looks over Thursday's slate as Aleksander Barkov and the Panthers head for Vegas to take on a Golden Knights squad with questions in net.
Hutch's Hockey: Silly Season
270 days ago
270 days ago
Shawn Hutchinson discusses the lack of trades so far and recommends some players that have started strong in March.
Past Fantasy Outlooks
2021
2020
2019
2018
2017
Advanced analytics have pegged Pelech as one of the best and most underrated defensemen in the league over the past few seasons, and the Islanders clearly agreed, signing him to a new eight-year, $46 million contract in August. It was a massive payday for a player who has never posted more than five goals and 21 points in a single season, but it's a deal that speaks to how well Pelech has played, and by extension, how the Isles have played with him on the ice. Sadly for virtual managers, Pelech simply doesn't produce enough points, hits or blocks to be an attractive fantasy option.
Pelech is slated to see first-pairing minutes after the Islanders lost Devon Toews (trade) and Johnny Boychuk (retirement) in the offseason. The 26-year-old Pelech was solid with nine points in 38 games last year before suffering a season-ending Achilles injury. He was healthy in time for the return to play, but suffered a wrist injury that required offseason surgery. Despite those two major injuries, Pelech is ready to go for 2020-21. He's reached the 20-point mark once in his career and came close a second time, but his real value lies in his defensive prowess. He had 81 hits and 83 blocked shots with a plus-4 rating in 2019-20. He'll be worth a look in deeper formats, but it's his partner, Ryan Pulock, that will generate most of the scoring when the duo is on the ice.
While he played fewer minutes in the same amount of games during his second full NHL season, Pelech produced more goals (5) and points (21) while posting a career-best plus-22 rating in 2018-19. Like many of the Islanders defenders, he benefited from Barry Trotz's defensive structure and a jump from 2.8 to 4.5 in shooting percentage. Pelech is also a solid contributor in the "extra categories" -- he recorded 149 hits and 116 blocks in 78 games last campaign. He's still only 24, but if Pelech is going to take another step forward in fantasy circles, he'll have to receive more playing time. The 2012 third-round pick almost never skated on the power play last season, which would represent a potential opportunity for him to improve his numbers, but there's no currently indication that he will receive additional minutes at even strength or on the man advantage in 2019-20.
At 6-foot-3 and 217 pounds, Pelech is a physical specimen on the blue line, but the offense has been hard to come by during his young NHL career. Over his first full season in 2017-18, he scored just three goals and 19 points with a plus-7 rating. Pelech notched the same amount of goals last campaign as he did in 2016-17, despite receiving more than double the amount of minutes. The 23-year-old averages more than a hit and block per game, so he's useful to fantasy owners in that regard, but the real hope is that he starts inflicting more damage on opponents within the attacking zone.
With the trade of Travis Hamnoic over the summer there is a spot open on the blue line for either Ryan Pulock, Scott Mayfield, or Pelech. The Isles thought highly enough of Pelech to ensure that he wasn't taken by Las Vegas in the expansion draft. A strong showing by Pelech during camp could force the Islanders hand but most expect Pulock to win that final slot with one of Pelech or Mayfield serving as injury insurance and being a healthy scratch most nights while the other is playing with Bridgeport of the AHL.
More Fantasy News