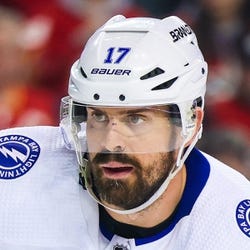 2022 Stats
G
14
A
20
PP Pts
3
+/-
11
PIM
24
ROS Projections
G
A
PP Pts
+/-
PIM
Unlock Our Projections
2022 Fantasy Outlook
Killorn has settled in as a reliable source of secondary offense for the Lightning the last few years and last season was no exception. He potted 25 goals in 82 games, while finishing with a career-high 59 points. Unfortunately for both Killorn and the Lightning, he no-showed Tampa Bay's run to a third straight Stanley Cup Final. He didn't score a goal in 23 playoff games, adding just four helpers. The Lightning lost Ondrej Palat to New Jersey in unrestricted free agency and didn't bring in any forwards of note, so there's a case to be made that Killorn - who will turn 33 years old in September -- will have the biggest opportunity of his career this coming season. Read Past Outlooks
read more
#