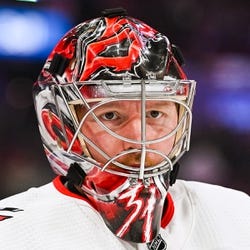 2021 Stats
W
35
L
14
SO
4
GAA
2.17
SV%
.922
2022 Projections
W
L
SO
GAA
SV%
Unlock Our Projections
2022 Fantasy Outlook
Andersen has long been one of the league's better goaltenders when healthy, but he's been plagued by injuries through much of his career and last season was no exception. Andersen missed Carolina's final six regular-season games and the team's entire playoff run due to a torn MCL. There were several reports he was improving and potentially closing in on a return during the playoffs, but the Hurricanes couldn't survive long enough to make it a reality. Andersen's 35 wins, 2.17 GAA and .922 save percentage from 2021-22 highlight the fact he's a legitimate No. 1 option -- both in real life and from a fantasy perspective -- but those who draft Andersen better have a solid backup plan in place given the netminder's past injury woes. Read Past Outlooks
read more
#