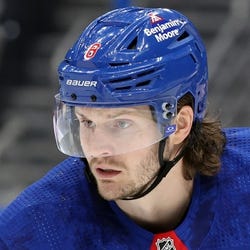 2022 Stats
G
0
A
6
PP Pts
0
+/-
-7
PIM
12
ROS Projections
G
A
PP Pts
+/-
PIM
Unlock Our Projections
2022 Fantasy Outlook
Trouba's performance a season ago wasn't talked about much, but he had a massive all-around campaign. The Michigan native played 81 of New York's 82 regular-season games, posting 11 goals, 39 points, 204 shots on goal, 207 hits, 177 blocks and a plus-25 rating. The Rangers' brass was so impressed with Trouba's game that they named him the team's new captain in August, the first they have had since Ryan McDonagh was dealt to the Lightning several years ago. Trouba doesn't see much power-play time anymore given that Adam Fox is around and that limits his scoring numbers, but he's a real asset in fantasy leagues which value hits and blocks. Read Past Outlooks
read more
#