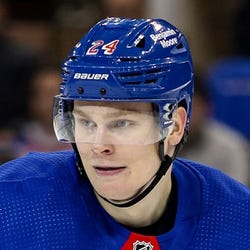 2022 Stats
G
9
A
14
PP Pts
2
+/-
8
PIM
8
ROS Projections
G
A
PP Pts
+/-
PIM
Unlock Our Projections
2022 Fantasy Outlook
It was another frustrating season for Kakko, the No. 2 overall pick from 2019. He missed well over two months in the latter part of the year due to a leg issue, limiting him to just 43 regular-season games. Kakko managed just seven goals and 18 points in that span when primarily playing on New York's third line and No. 2 power-play unit. Kakko displayed flashes of brilliance early in the Rangers' run to the Eastern Conference Finals, but it got so bad at the end that he was a surprise healthy scratch in Game 6 against Tampa Bay, New York's final game of the year. It would be foolish to give up on Kakko at age 21, but a breakout certainly doesn't appear imminent. Read Past Outlooks
read more
#

Calculate Stats Over Time
Just click on any two dates.
Scoring
FanDuel
DraftKings
Yahoo DFS
FantasyDraft
Head2Head
Loading Skater Game Log...
2022–23 Time On Ice Stats
Ice Time
Power Play
Short-Handed
2020–21
14:21
1:19
0:00
2021–22
15:27
1:14
0:27
2022–23
15:53
1:01
0:27
Rangers Depth Chart
Our full team depth charts are reserved for RotoWire subscribers.
Subscribe Now
Rangers Power Play Depth Chart
Our full team depth charts are reserved for RotoWire subscribers.
Subscribe Now
Recent RotoWire Articles Featuring Kaapo Kakko See More
NHL Barometer: Risers and Fallers
4 days ago
4 days ago
This week's set of risers includes Carolina winger Sebastian Aho, who's been in elite form, scoring seven goals in his last four games.
NHL Waiver Wire: Pickups of the Week
8 days ago
8 days ago
This week's set of pickups includes Anton Lundell, who's taken off after shifting to the wing and moving up to the Panthers' top line.
DraftKings NHL: Friday Breakdown
8 days ago
8 days ago
Michael Finewax’s Friday player insights include a Panthers forward stack against the visiting Kings.
DraftKings NHL: Monday Breakdown
12 days ago
12 days ago
Chris Morgan’s Monday DraftKings plays include Stars veteran Tyler Seguin against Buffalo.
DraftKings NHL: Thursday Breakdown
30 days ago
30 days ago
Sasha Yodashkin dives into Thursday’s DraftKings offering, rolling with plenty of Rangers against Montreal.
Past Fantasy Outlooks
2021
2020
2019
Kakko's rookie season back in 2019-20 was a disaster, both in terms of scoring (10 goals, 23 points in 66 games) and advanced analytics. The offensive numbers (9 goals, 17 points in 48 games) weren't much better last year, but his defensive play improved immensely, giving real hope there is a breakout forthcoming for the former No. 2 overall pick. Kakko is expected to move into the Rangers' top six this season with Pavel Buchnevich having been traded to the Blues, meaning he is likely to play on a line with either Artemi Panarin or Mika Zibanejad. That, along with an expected bump in power-play time make Kakko an ideal late-round fantasy sleeper. Kakko won't turn 21 years of age until mid-February.
Kakko's rookie season was disappointing in a lot of ways, but some growing pains were to be expected for an 18-year-old getting his first taste of not only NHL hockey, but North American hockey in general. The second overall pick from the 2019 draft finished the shortened 2019-20 regular season with 10 goals, 13 assists, 13 power-play points and 109 shots on net, but he also posted an ugly minus-26 rating. Looking ahead to 2020-21, Kakko is expected to see time on the Rangers' third line and second power-play unit. That assignment likely won't lead to a substantial jump in ice time, but it's safe to assume Kakko will do more with his opportunities in year two following a full season of NHL hockey and an elongated offseason of training. Fantasy managers shouldn't expect huge things from Kakko this season, but a 15-plus goal, 35-plus point pace isn't unrealistic, making him worth snagging with a late-round pick in this year's drafts.
Although the Devils opted to take American pivot Jack Hughes with the first overall pick in this year's draft, Kakko, who the Rangers took second overall, was considered by many to be the most NHL-ready players in this year's class. The Finnish forward spent the 2018-19 campaign competing against men in his native country, racking up 22 goals and 38 points in 45 games with TPS Turku of the Liiga. The 18-year-old will be stepping into a major role from the get-go as a rookie in 2019-20, logging top-six minutes while also working on New York's top power-play unit, giving him 30-plus goal and 60-plus point upside. Kakko will be a real-life and fantasy stud for years to come.
More Fantasy News