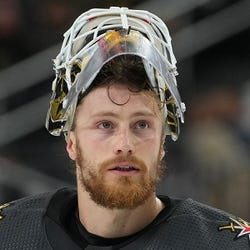 IR-LT
Injury Hip
Est. Return 10/4/2022
2021 Stats
W
10
L
9
SO
1
GAA
2.90
SV%
.895
2022 Projections
W
L
SO
GAA
SV%
Unlock Our Projections
2022 Fantasy Outlook
Injuries limited Brossoit to 24 games a season ago. His numbers were fair (10-9-3 record, 2.90 GAA, .895 save percentage), but far from remarkable. Brossoit underwent offseason surgery for an undisclosed issue and is unlikely to be ready for Opening Night, although an exact timetable has yet to be revealed. With Robin Lehner expected to miss the entire upcoming season due to hip surgery, Brossoit would appear to have a real chance to emerge as Vegas' No. 1 goaltender if he is able to return from his ailment in fairly short order. He's a solid fantasy stash in leagues with multiple IR spots. Read Past Outlooks
read more
#

Calculate Stats Over Time
Just click on any two dates.
Scoring
FanDuel
DraftKings
Yahoo DFS
FantasyDraft
Head2Head
Loading Goalie Game Log...
2021–22 Time On Ice Stats
Golden Knights Depth Chart
Our full team depth charts are reserved for RotoWire subscribers.
Subscribe Now
Recent RotoWire Articles Featuring Laurent Brossoit
2022-23 Yahoo Goalie Tiers
21 days ago
21 days ago
Jon Litterine provides a tiered preview of this year's options at goalie.
FanDuel NHL: Tuesday Targets
156 days ago
156 days ago
Jason Chen breaks down Tuesday's 13-game slate, making his best picks to help you build a winning FanDuel lineup.
Goalie Report: Risers & Fallers
183 days ago
183 days ago
Jason Chen surveys the world of goalies, including a look at Connor Hellebuyck, who is heating up for the Jets.
DraftKings NHL: Wednesday Breakdown
183 days ago
183 days ago
Sasha Yodashkin is here Wednesday with his expert insights to help you build a winning DraftKings lineup.
NHL Waiver Wire: Pickups of the Week
189 days ago
189 days ago
Evan Berofsky analyzes the top waiver-wire options for the week, including Pittsburgh's Evan Rodrigues.
Past Fantasy Outlooks
2021
2020
2019
2018
2017
2015
2014
Brossoit received minimal playing time over the past three seasons in Winnipeg as the understudy to Connor Hellebuyck, but he's looked fine whenever given the opportunity. His 25-19-3 record, 2.76 GAA and .913 save percentage are perfectly adequate for a backup and Vegas was impressed enough to hand Brossoit a two-year, $4.65 million contract this summer to serve as the backup to Robin Lehner on the heels of their shocking decision to trade Marc-Andre Fleury to Chicago. The addition of Brossoit should help the Golden Knights on the ice, but he won't be of much assistance to fantasy managers with his minimal role.
Regardless of how condensed the NHL schedule might be, starter Connor Hellebucyk will likely be in contention for the league lead in games played next year. As such, fantasy players shouldn't expect much in terms of opportunities for Brossoit, who only saw action in 19 games in 2019-20, posting a 6-7-1 record and a 3.28 GAA. The only value Brossoit might offer in 2020-21 would require pairing him with Hellebuyck, but even then he may just be unnecessarily taking up a roster spot.
Brossoit actually put together a better GAA (2.52) and save percentage (.925) than starter Connor Hellebuyck last season, though the British Columbia native played in just 21 contests. There is little to no chance Brossoit will earn the No. 1 gig in Winnipeg, but he should be expected to see a similar workload in the 20-25 game range, which likely puts him near the top of backup goalie options next year.
Brossoit bounced between AHL Bakersfield and the NHL's Oilers last season. He appeared in just 14 games, maintaining a porous 3-7-1 record, 3.24 GAA and .883 save percentage. The British Columbia native was deemed expendable after failing to unseat Al Montoya as the primary backup in Oil Country. While he finds himself in a similar situation in Winnipeg -- the 25-year-old has virtually no shot at unseating Vezina Trophy finalist Connor Hellebuyck -- Brossoit should see more time in net in 2018-19 than he has in his previous four seasons, though his unimpressive record leaves little for owners to get excited about.
Brossoit delivered a stunningly effective stat line in a limited NHL sample last year, putting up a 4-1-0 record with a 1.99 GAA and .928 save percentage, but his AHL work doesn't support the notion of a breakout -- he put up just a .908 save mark in 21 minor-league games, though it was .920 the year before. he'll look to work on his consistency while seeing relatively little use in a backup role for the Oilers, who sent No. 1 netminder Cam Talbot out there for an NHL-high 73 appearances in 2016-17. That doesn't leave Brossoit with the promise of much fantasy value, though his team context means he'll be an intriguing play in daily formats when he does draw starts.
Brossoit is still viewed as the Oilers' top goaltending prospect left in the minors, but the organization's offseason acquisition of Cam Talbot suggests the team has already made a decision on its long-term future in goal. Still just 22 years old, Brossoit has time to change the organizational goaltending hierarchy, but at least for 2015-16, he'll stick at AHL Bakersfield barring an injury to Talbot or backup Anders Nilsson.
Brossoit will either start the season in the ECHL or roll as the backup to Richard Bachman in the AHL. His game needs work, so he'll spend a few seasons in the minors, honing his craft.
More Fantasy News