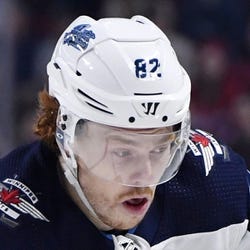 IR
Injury Wrist
Est. Return 2/11/2023
2022 Stats
G
1
A
5
PP Pts
0
+/-
1
PIM
6
ROS Projections
G
A
PP Pts
+/-
PIM
Unlock Our Projections
2022 Fantasy Outlook
The Jets love Appleton so much that they went out and reacquired him this past March for a draft pick after losing him to the Kraken in the expansion draft a little less than a year prior. Appleton played in 68 games between his two stops, managing eight goals and 21 points, numbers right in line with what we have seen from him in the past. Appleton offers nothing in the hit or blocks departments and doesn't have a single power-play point in his four NHL seasons, so he won't be of much use to your fantasy team on draft day. Read Past Outlooks
read more
#

Calculate Stats Over Time
Just click on any two dates.
Scoring
FanDuel
DraftKings
Yahoo DFS
FantasyDraft
Head2Head
Loading Skater Game Log...
2022–23 Time On Ice Stats
Ice Time
Power Play
Short-Handed
2020–21
14:26
0:31
0:56
2021–22
14:18
0:32
0:12
2021–22
16:23
0:30
2:14
2022–23
16:34
0:02
1:54
Jets Depth Chart
Our full team depth charts are reserved for RotoWire subscribers.
Subscribe Now
Jets Power Play Depth Chart
Our full team depth charts are reserved for RotoWire subscribers.
Subscribe Now
Recent RotoWire Articles Featuring Mason Appleton See More
FanDuel NHL: Thursday Targets
76 days ago
76 days ago
Jason Chen suggests checking out a Penguins stack Thursday in St. Paul.
FanDuel NHL: Monday Targets
100 days ago
100 days ago
Jason Chen previews Monday’s six-game slate, which is highlighted by a star-studded matchup between Pittsburgh and Edmonton.
FanDuel NHL: Monday Targets
296 days ago
296 days ago
Jason Chen previews Monday’s single-game offering between the Canadiens and Jets.
Hutch's Hockey: Trade Deadline Reactions
317 days ago
317 days ago
Shawn Hutchinson breaks down the fantasy changes from all of the trades after the NHL's trade deadline.
FanDuel NHL: Monday Targets
November 1, 2021
November 1, 2021
Jason Chen brings us his insights for Monday's three-game slate, recommending plenty of Senators on the road in Chicago.
Past Fantasy Outlooks
2021
2020
2019
2018
In his third NHL season, Appleton made a slight breakthrough with 12 goals and 25 points in 56 games for the Jets. The Wisconsin native thrived in a middle-six role after lingering on the fourth line during his first two campaigns, but he was quickly scooped up by the Kraken in their expansion draft. With the wing depth in Seattle, Appleton remains likely to slot into a third-line role, although he began his career as a center and could be deployed at that position. With a full campaign ahead, the sixth-round pick from 2015 could put up 35-40 points while logging north of 15 minutes of ice time per game. It remains to be seen if he'll earn any power-play time with Seattle -- Appleton's 6-foot-3 frame could make for a solid net-front presence if he earns time on the man advantage.
Appleton missed time due to injuries in 2019-20, accumulating just eight points in 46 contests in a bottom-six role. Unlike many of the Jets' forwards, Appleton doesn't play a very physical style, so his fantasy value is almost fully dependent on his scoring ability. The sixth-round pick from 2015 doesn't seem all that likely to make a big splash in 2020-21 -- he only has 18 points in 82 career appearances. With a 56-game campaign ahead, Appleton likely won't contribute more than 15 points, so most fantasy managers can find their depth scoring elsewhere.
Appleton made his NHL debut last year on Dec. 1 versus the Devils and never looked back, appearing in 36 games in which he registered three goals, seven helpers and 29 shots despite averaging a mere 8:12 of ice time. The Green Bay, Wisconsin native's solid showing in the back half of the season should give him the inside track on a spot in the bottom-six heading into the 2019-20 campaign. The Michigan State product has notched 98 points in 116 AHL contests and figures to be a potential sleeper pick if he can avoid spending time with the Moose this year.
Of all the prospects within the Jets' system, Appleton stands the best chance of forcing his way into the lineup this season. The playmaking center racked up a team-leading 66 points for AHL Manitoba last season and is capable of lining up on the power play. The Green Bay, Wisconsin native will likely start off training camp on the outside looking in, but should headline the short list of potential call-ups. If the guys ahead of him in the depth chart struggles -- Nicolas Petan, Andrew Copp or Marko Dano to name a few -- the team may decide to see if the 22-year-old can hold up under the bright lights of the NHL.
More Fantasy News