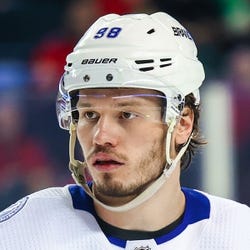 2022 Stats
G
4
A
19
PP Pts
12
+/-
1
PIM
22
ROS Projections
G
A
PP Pts
+/-
PIM
Unlock Our Projections
2022 Fantasy Outlook
Sergachev is seemingly talked about in fantasy circles every single season as a potential breakout candidate, but due to Victor Hedman's presence as the unquestioned top defenseman on the Lightning, it hasn't happened yet. That said, Sergachev has developed into a reliable source of secondary defensive scoring. He's finished somewhere between 30-40 points in each of his first five full NHL seasons. Sergachev will play this entire year at age 24, and the Lightning were impressed enough with his development to hand him a new eight-year, $68 million contract extension in July. Sergachev is a worthy fantasy pick because his floor is high and his ceiling is massive if something ever happens to Hedman, but something unforeseen will have to happen for him to be a true difference maker. Read Past Outlooks
read more
#

Calculate Stats Over Time
Just click on any two dates.
Scoring
FanDuel
DraftKings
Yahoo DFS
FantasyDraft
Head2Head
Loading Skater Game Log...
2022–23 Time On Ice Stats
Ice Time
Power Play
Short-Handed
2020–21
21:58
2:04
1:44
2021–22
22:28
1:31
2:06
2022–23
23:53
3:02
2:52
Lightning Depth Chart
Our full team depth charts are reserved for RotoWire subscribers.
Subscribe Now
Lightning Power Play Depth Chart
Our full team depth charts are reserved for RotoWire subscribers.
Subscribe Now
Recent RotoWire Articles Featuring Mikhail Sergachev
Hutch's Hockey: The Annual Apology Tour
9 days ago
9 days ago
Shawn Hutchinson reviews his draft-day choices and suggests players to help bolster rosters at the quarter-mark of the NHL season.
Yahoo DFS Hockey: Monday Picks
9 days ago
9 days ago
Chris Morgan's Monday Yahoo player picks feature a couple Golden Knights out in Columbus.
Yahoo DFS Hockey: Friday Picks
12 days ago
12 days ago
Chris Morgan checks in with his Friday picks to help you craft a winning Yahoo DFS entry.
Frozen Fantasy: Joy of the Game
24 days ago
24 days ago
Janet Eagleson reminds us to enjoy the special moments in life, like when you can add Jason Zucker to your fantasy rosters.
Yahoo DFS Hockey: Friday Picks
26 days ago
26 days ago
Chris Morgan previews Friday’s four-game slate, making his picks to hopefully lead you to DFS success.
Past Fantasy Outlooks
2021
2020
2019
2018
2017
2016
2015
Sergachev has been an incredibly steady presence on the Tampa Bay blue line since earning a regular shift as a 19-year-old in 2017-18. In four straight seasons, he's recorded at least 30 points, at least 100 shots and at least two blocks and one hit per game while maintaining a plus-minus rating above zero. If there's a downside to that consistency from a fantasy perspective, it's the lack of a high ceiling, as he's never scored more than 10 goals or 40 points, and Sergachev seems unlikely to see a big surge in his offensive numbers as long as Victor Hedman is around. The Lightning aren't going to mess with a winning formula on the blue line, so look for Sergachev to see his usual role this season, and deliver his usual numbers.
Sergachev had another strong season in 2019-20, notching 10 goals, 24 assists, 13 power-play points, 118 shots on goal, 58 PIM, 106 hits and 99 blocks while averaging 20:22 of ice time in 70 games while skating in a top-four role. He's already logged three full NHL seasons, but Sergachev will only be 22 years old when the 2020-21 campaign gets underway, so he should only continue to improve in year four. The 2016 first-round pick shouldn't have any trouble playing at an 8-plus goal, 40-plus point pace while adding decent totals in shots, power-play points, hits and blocks during the upcoming campaign, so he'll be a solid third or fourth fantasy option along the blue line and worthy of a mid-round pick during this year's drafts.
Sergachev's game is about to take a step forward. Underneath last year's drop in offensive production (from 40 points to 32) lies improvements in just about every part of his game, especially in his own zone. All he needs is more power-play time to gain greater fantasy relevance. Sergachev's five-on-five minutes will no longer be protected -- guys like Anton Stralman and Dan Girardi are long gone -- but he's ready for the responsibility. The 21-year-old's single-year value will hinge on how much ice time the second power-play unit gets. His drop in production in 2018-19 was the result of the Bolts' overuse of the first power-play unit (and non-use of the second). Dynasty owners should swoop in and try to pry this guy loose from his owner before the season begins.
Sergachev delivered a 40-point rookie campaign and was every bit the stud the Canadiens drafted him to be. Wait. He's not playing for the Habs? Right. That Jonathan Drouin trade is looking more and more weighted in Tampa's favor. Little wonder the Senators asked for this 20-year-old in any deal involving Erik Karlsson. Sergachev is already among the Bolts' top defenders and will continue to grow his immense potential with protected minutes behind Victor Hedman, Ryan McDonagh and Anton Stralman. The young Russian will get to run the second power-play unit and should see his point totals grow a bit. It won't be long before he delivers consistent 55-60 point seasons, so push him up your dynasty draft.
Sergachev is a blue-chip prospect whose game has grown exponentially since the Habs drafted him ninth overall in 2016. He's an excellent skater with size who already shows elite two-way skills. He's feisty, bordering on aggressive, but poised and smart. Sergachev comes to Tampa with an OHL Defenseman of the Year Award (2016) and Memorial Cup (2017) on his trophy shelf and says he's ready for the NHL. But at just 19, his development is likely better served back in Windsor of the OHL, and Sergachev is probably headed back there given the logjam of defenders in Tampa. However, he’s excelled everywhere he's gone, so don't count him out until the season starts. Of course, keeper owners already know his name and should target him in the first round of any prospect draft.
Sergachev is a Russian native intent on playing in the NHL. Before his draft-eligible season, he left the safety of the motherland to play for the Windsor Spitfires in the Ontario Hockey League. As a testament to the kid's smarts and decision-making ability, the move paid off as he was selected ninth overall by the Canadiens in 2016 and becomes Montreal's best defensive prospect. Sergachev scored 17 goals with 40 assists in 67 games, while playing in all situations for the Spitfires. His 31 power-play points led all OHL blueliners, and the 18-year-old became the youngest player to win the award as the league's best defenseman. Cool and confident with the puck, the Russian is a smooth-skater that makes the right pass and is patient when given space and time. Defensively, he uses his size well and there isn't much development work left for him. At 6-foot-2, 208 pounds, he has a man's body that's ready to stand the rigors of the NHL, though we doubt Montreal will rush him.
Signed three-year, entry-level deal with the Canadiens in July 2016.
More Fantasy News