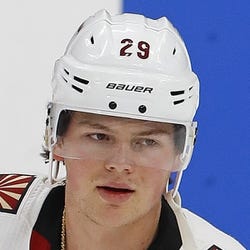 2022 Stats
G
7
A
10
PP Pts
4
+/-
-10
PIM
24
ROS Projections
G
A
PP Pts
+/-
PIM
Unlock Our Projections
2022 Fantasy Outlook
Hayton has been around for seemingly ever, but last year was actually his first full NHL season and he played the entire year at age 21. When you consider his youth and the fact he played for one of the worst teams in the league, Hayton's 10 goals and 24 points in 60 games don't seem all that bad. He missed about a month in the middle of the year due to a hand injury but was otherwise healthy. There's a pretty decent chance Hayton will never prove to be worthy of the No. 5 overall pick the Coyotes spent on him in 2018, but he clearly has some talent and should be given every chance at significant playing time on a team which is years from legitimate playoff contention. Read Past Outlooks
read more
#

Calculate Stats Over Time
Just click on any two dates.
Scoring
FanDuel
DraftKings
Yahoo DFS
FantasyDraft
Head2Head
Loading Skater Game Log...
2022–23 Time On Ice Stats
Ice Time
Power Play
Short-Handed
2020–21
11:29
2:15
0:00
2021–22
16:07
1:32
1:28
2022–23
16:17
1:54
1:22
Coyotes Depth Chart
Our full team depth charts are reserved for RotoWire subscribers.
Subscribe Now
Coyotes Power Play Depth Chart
Our full team depth charts are reserved for RotoWire subscribers.
Subscribe Now
Recent RotoWire Articles Featuring Barrett Hayton See More
DraftKings NHL: Saturday Breakdown
7 days ago
7 days ago
Chris Morgan previews Saturday’s slate, rolling with Oilers netminder Stuart Skinner against Chicago.
FanDuel NHL: Sunday Targets
20 days ago
20 days ago
Michael Finewax recommends loading up on Jets against the struggling and tired Coyotes for your Sunday FanDuel lineups.
Hutch's Hockey: Back in the Battle
26 days ago
26 days ago
Shawn Hutchinson shares his strategy for dealing with players coming back from injury and offers up some waiver-wire additions for the week ahead.
FanDuel NHL: Sunday Targets
27 days ago
27 days ago
A top-tier defender as a salary saver? Read on to see who Michael Finewax is talking about.
DraftKings NHL: Friday Breakdown
29 days ago
29 days ago
Michael Finewax is expecting big things from Timo Meier and the Sharks on Friday as they take on the Ducks, the NHL's worst defensive team.
Past Fantasy Outlooks
2021
2020
2019
2018
After playing 20 NHL games as a 19-year-old two seasons ago, Hayton saw action in just 14 games last year. He has yet to produce offensively at the highest level, posting just three goals and seven points in those 34 games. In Arizona's defense, they felt Hayton would be best served playing top minutes in the AHL as opposed to a depth role in the NHL and they were probably correct. There's upside here, but the early returns on Hayton, the No. 5 overall pick in 2018, aren't great. He's a candidate for a change-of-scenery trade if he doesn't find his game this coming year.
Hayton is expected to make the full-time jump to the NHL in 2020-21 after posting four points and 27 shots in 20 appearances last year. The Coyotes' first-round pick from 2018, Hayton suffered a shoulder injury playing for Team Canada during the World Juniors tournament last winter, which ultimately cost him more than a month of action with the big club. The 20-year-old center will likely start the campaign in a bottom-six role, but his talent level suggests he could move up the lineup quickly, potentially displacing Derek Stepan on Arizona's second line. The Coyotes have rarely been known for posting large scoring totals, so expect Hayton to land between 20 and 30 points with modest power-play usage and some physicality as a bonus.
Hayton's NHL stay did not last long in 2018-19, as he was scratched for two games before returning to OHL Sault Ste. Marie. As the captain of the junior squad, he registered 26 goals and 66 points in 39 regular-season contests and another 16 in 11 in the OHL playoffs. Hayton also represented Canada at the World Junior Championship, posting four helpers in five games. The two-way center has nothing left to prove at the junior level and will likely see time either with the Coyotes or at AHL Tucson.
Arizona addressed its need for a center by selecting Hayton fifth overall in the 2018 NHL Entry Draft. In the words of Coyotes GM John Chayka, the prized prospect is “the guy you think you can build your team around.” While Hayton -- who's drawn comparisons to four-time Selke Trophy winner Patrice Bergeron of the Bruins -- accumulated 110 points (regular season and playoffs) for OHL Sault Ste. Marie over the past two seasons, he's not expected to hit the big stage in 2018-19. He does, however, check out as an intriguing dynasty-league stash
More Fantasy News