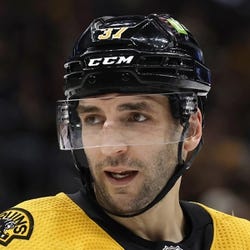 2022 Stats
G
18
A
20
PP Pts
13
+/-
21
PIM
14
ROS Projections
G
A
PP Pts
+/-
PIM
Unlock Our Projections
2022 Fantasy Outlook
A future first-ballot Hall of Famer, Bergeron showed there was plenty of gas left in the tank last season at age 36, finishing with 25 goals and 65 points in 73 games - he also won his fifth Selke Trophy as the league's top defensive forward. Bergeron added 23 points with the man advantage and 293 shots on goal, his most since 2016-17. This summer, Bergeron appeared to be genuinely undecided as to whether he would return for an 18th NHL season, but then the Bruins fired head coach Bruce Cassidy in early June and the reports regarding a comeback quickly became more positive. He'll be back for a 19th season in 2022-23. Read Past Outlooks
read more
#