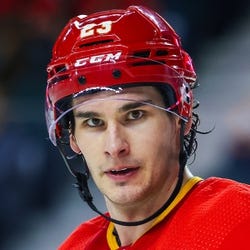 IR-LT
Injury Hip
Est. Return 10/12/2022
2021 Stats
G
8
A
15
PP Pts
13
+/-
-15
PIM
24
2022 Projections
G
A
PP Pts
+/-
PIM
Unlock Our Projections
2022 Fantasy Outlook
Better than a point-per-game player as recently as the 2018-19 campaign, Monahan's stock is at an all-time low. He played 65 games for Calgary a season ago, managing just eight goals and 23 points. Thirteen of those points came with the man advantage, to give you an idea of how ineffective Monahan was at even strength. Needing to clear cap space following their signing of Nazem Kadri, the Flames traded Monahan to Montreal in mid-August. He is expected to be fully recovered from hip surgery by the time the season begins, although Monahan remains nothing more than a late-round Hail Mary from a fantasy perspective. Read Past Outlooks
read more
#