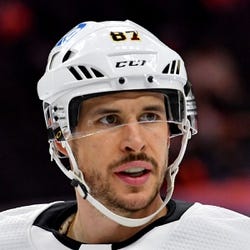 2021 Stats
G
31
A
53
PP Pts
30
+/-
19
PIM
32
2022 Projections
G
A
PP Pts
+/-
PIM
Unlock Our Projections
2022 Fantasy Outlook
The definition of consistency, Crosby has averaged more than a point-per-game in each of his first 17 NHL seasons. He finished with 31 goals and 84 points in 69 games last year, the eleventh time he's cracked the 80-point plateau in his already storied career. Health is really the lone concern with Crosby at this point. Sid missed time early on last season with a wrist issue but remained healthy the rest of the way before an upper-body injury that may or may not have been a concussion cost him the latter portion of Game 5 and all of Game 6 of Pittsburgh's eventual seven-game, first-round series loss to the Rangers. Crosby will play the entire 2022-23 campaign at age 34 and he's displayed zero signs of slowing down, so it will be up to fantasy managers to take the potential injury risk into account. Read Past Outlooks
read more
#