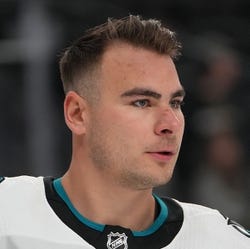 2022 Stats
G
12
A
12
PP Pts
7
+/-
-6
PIM
8
ROS Projections
G
A
PP Pts
+/-
PIM
Unlock Our Projections
2022 Fantasy Outlook
Meier was about the lone bright spot in what was a terrible season for the Sharks. The Swiss forward broke out to the tune of career-best marks in goals (35) and points (76), while his 326 shots on goal placed Meier third in the league behind only Auston Matthews and Alex Ovechkin. Meier's ice time was up more than three minutes per game this past season compared to two years ago, so it's possible this type of production is here to stay if the usage remains. San Jose still projects to be a poor hockey club and it's hard to see Meier matching his totals from a season ago if his shot volume drops to what we have seen in the past. It seems as if this one could go either way, making Meier a bit of a risky pick in the early-to-mid rounds of fantasy drafts this fall. Read Past Outlooks
read more
#

Calculate Stats Over Time
Just click on any two dates.
Scoring
FanDuel
DraftKings
Yahoo DFS
FantasyDraft
Head2Head
Loading Skater Game Log...
2022–23 Time On Ice Stats
Ice Time
Power Play
Short-Handed
2020–21
16:04
1:43
0:09
2021–22
19:10
2:39
0:03
2022–23
19:54
2:43
0:12
Sharks Depth Chart
Our full team depth charts are reserved for RotoWire subscribers.
Subscribe Now
Sharks Power Play Depth Chart
Our full team depth charts are reserved for RotoWire subscribers.
Subscribe Now
Recent RotoWire Articles Featuring Timo Meier
DraftKings NHL: Saturday Breakdown
Yesterday
Yesterday
Chris Morgan likes Arizona’s Clayton Keller on Saturday against Vancouver.
Yahoo DFS Hockey: Wednesday Picks
4 days ago
4 days ago
Chris Morgan previews Wednesday's slate, recommending Detroit rearguard Moritz Seider against Buffalo.
NHL Barometer: Risers and Fallers
5 days ago
5 days ago
This week's risers section is led by Sean Monahan, who's been in vintage form of late after bouncing back from a slow start.
DraftKings NHL: Sunday Breakdown
7 days ago
7 days ago
Chris Morgan previews Sunday’s DraftKings slate, recommending Jets rearguard Josh Morrissey against Chicago.
FanDuel NHL: Sunday Targets
7 days ago
7 days ago
Michael Finewax looks at the Sunday schedule and features a few Sharks.
Past Fantasy Outlooks
2021
2020
2019
2018
2017
2016
2015
Meier's scoring pace took a plunge last year with just 12 goals and 19 assists in 54 contests. Thought to be a lock for a top-six job, Meier spent stints on the third line last season as he continues to struggle to replicate his 66-point performance from 2018-19. The Swiss winger still salvages value as a volume shooter with a bit of an edge (155 shots on net, 75 hits last year), but he'll need to put it all together in 2021-22 to remain in a featured role. His shooting percentage should bounce back up to the 10 percent mark after he shot 7.7 percent last year, which puts him in line for a 20-goal, 50-point campaign. He'll be a decent buy-low target in the late rounds for fantasy managers.
The Sharks took a huge step back last season, and Meier wasn't immune, dropping from 30 goals in 2018-19 to 22 goals in 2019-20 and from a plus-9 rating to a minus-22 mark. In terms of a silver lining, Meier did lead San Jose in scoring with 49 points, and at just 24 years old, he's just entering his prime. He'll also have the opportunity to play with better linemates in 2020-21 after playing mostly with Barclay Goodrow and Joe Thornton last season, neither of whom are still with the team. Meier has 30-goal upside despite a very average career shooting percentage and also provides a lot of shots and hits, making him a great value pick in the middle rounds of fantasy drafts.
Meier enjoyed a stellar third-year campaign with the Sharks in 2018-19, as he compiled 30 goals, 36 assists and 10 power-play points through 78 games. His crease-crashing tendencies typically wreak havoc on opposing goaltenders, and the feisty forward further supports the Pacific Division club with his versatility -- Meier can line up on either wing, plus he's accustomed to work on both the power play and penalty kill. The Swiss national finished third on the Sharks with 250 shots last season, and that number should only climb following the offseason departure of team captain Joe Pavelski (now in Dallas). It certainly doesn't hurt that Meier commanded a four-year, $24 million extension, either, but his launch to fantasy stardom inevitably will leave him on tons of watch lists ahead of the 2019-20 campaign. Indeed, he's suddenly a household name, and only the most casual draftee is liable to overlook him.
Meier was a regular contributor during his sophomore season in 2017-18, potting 21 goals while tacking on 15 assists in 81 contests. Unfortunately for Meier, the Sharks have a bit of a logjam at left wing with Evander Kane and Tomas Hertl both appearing ahead of him on the depth chart, so unless he's able to transition to the right side, the 2015 first-round pick may be stuck in a third-line role for the foreseeable future. Nonetheless, San Jose will undoubtedly find ways to increase Meier's ice time in 2018-19, which could allow him to eclipse the 45-point threshold for the first time in his career.
Meier is a power forward who loves to slice through the attacking zone, using deceptive speed to pick up scoring chances. Last season, at the age of 20, the Swiss-born skater experienced a near 50/50 split in playing for the Sharks and their minor-league affiliate, the AHL San Jose Barracuda. He finished with 14 goals and 23 points in 33 minor-league contests, but naturally hit the brakes on the way to six points over 34 contests -- plus 12:28 of average ice time -- at the highest level. Meier casts a sizable blip on the Sharks' radar as the ninth overall draft selected from 2015, but he needs time to evolve into a full-time NHLer. As such, it would be surprising to see him on non-keeper rosters in 2017-18.
Meier was a beast in his final year of junior hockey, posting 34 goals and 53 assists in 52 games. He then added 23 points in 18 postseason contests, and eight more points in five Memorial Cup games. The power forward projects to get some NHL time this season. The big question is how well he does at camp and whether general manager Doug Wilson believes that Meier needs some time with AHL San Jose to ease the transition into the pro ranks.
The ninth overall pick in the 2015 draft, Meier already has NHL size and perhaps NHL-caliber sniping ability after ripping off 44 goals and 46 assists for Halifax of the QMJHL last season. But that doesn't meant that the 18-year-old Swiss native has a role with the Sharks right now -- the team's forward corps is quite deep. Most likely, following training camp with San Jose, the budding power forward will return for another campaign at Halifax, where a big season could land him high on next year's prospect lists.
More Fantasy News