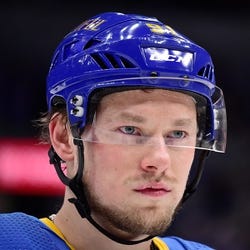 2022 Stats
G
10
A
19
PP Pts
9
+/-
-18
PIM
8
ROS Projections
G
A
PP Pts
+/-
PIM
Unlock Our Projections
2022 Fantasy Outlook
Clearly not impacted by his request to be traded out of St. Louis that is yet to be accommodated by the Blues, Tarasenko finished with a career-high 82 points in 75 games a season ago. It was the sixth time he potted 30-plus goals (34), while his nine game-winners were also a new high-water mark. The Blues are a quality club with a nice mix of veterans and younger players, so it comes as no shock the team simply won't give Tarasenko away for the sake of doing so. There has been no indication the Russian's trade request has been rescinded, but unless an unexpected deal materializes, Tarasenko, along with his likely 30-plus-goal and point-per-game pace numbers will be in the St. Louis lineup in the fall. Read Past Outlooks
read more
#