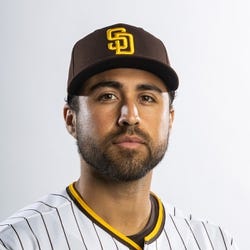 * Exit Velocity and Barrels/PA % are benchmarked against 2019 data (min 400 PA) and Hard Hit Rate is benchmarked against last season's data (min 400 PA). See here for more exit velocity/barrels stats plus an explanation of current limitations with that data set.
BB/K
0.31
BB Rate
9.5%
K Rate
30.4%
BABIP
.348
ISO
.074
AVG
.240
OBP
.316
SLG
.314
OPS
.630
wOBA
.285
Exit Velocity
86.9 mph
Hard Hit Rate
24.1%
Barrels/PA
2.2%
Expected BA
.221
Expected SLG
.309
Sprint Speed
23.7 ft/sec
Ground Ball %
49.4%
Line Drive %
26.6%
Fly Ball %
24.1%
Prospect Rankings History
View Complete Alfonso Rivas Prospect Ranking History
Advanced Batting Stats
Loading Advanced Batting Stats...
Additional Stats
Games By Position
Defensive Stats
Loading Games Played by Position...
Loading MLB Defensive Stats...
Batted Ball Stats
Loading Batted Ball Stats...
Stats Vs Upcoming Pitchers
Want more matchup stats?
View Alfonso Rivas vs. Pitcher Stats
Loading Matchup Stats...
Cubs Depth Chart
Our full team depth charts are reserved for RotoWire subscribers.
Subscribe Now
Recent RotoWire Articles Featuring Alfonso Rivas
DraftKings MLB: Thursday Breakdown
6 days ago
6 days ago
Chris Morgan provides his insights to help you build a winning Thursday DraftKings lineup across an eight-game slate.
FanDuel MLB: Monday Targets
9 days ago
9 days ago
Coors Field is usually a strong venue for offensive DFS production and Chris Morgan believes that trend will continue tonight.
FanDuel MLB: Monday Targets
30 days ago
30 days ago
Chris Morgan is recommending a Red Sox stack against Twins pitcher Dylan Bundy, who is only striking out 6.38 batters per nine innings.
NL FAAB Factor: Waiver Pickups of the Week
31 days ago
31 days ago
Jan Levine packs this week's edition with a number of pitchers who may be set to receive more opportunities.
NL FAAB Factor: Waiver Pickups of the Week
73 days ago
73 days ago
Jan Levine analyzes the logjam that is the Padres outfield.
Past Fantasy Outlooks
2021
2020
Rivas moved from Oakland to Chicago in a January 2020 trade for Tony Kemp. Though he wasn't selected to train at the Cubs' alternate site, Rivas was part of the team's Arizona instructional league roster, and he reportedly performed well in that opportunity. The 24-year-old has a pretty left-handed swing that he has used to compile a .290 average across two minor-league seasons and is not shy about taking a walk, registering a 13.0 BB% over 800 plate appearances during that span. Rivas' hit tool could translate to big-league success, but his ability to stick in an everyday role could come down to his growth as a power hitter. Rivas has hit only 10 homers over 183 minor-league games, so he'll need to add some pop to earn everyday at-bats. His hitting profile has been compared to that of Mark Grace, which sounds great until you recall that Grace averaged only 11 homers over 16 big-league campaigns.
At 6-foot, 188 pounds, Rivas lacks typical size for first base and will be heading to Double-A for his age-23 season, but he has been a high-level performer thus far. The reason he fell to the A's in the fourth round of the 2018 draft was that many evaluators questioned whether he could hit for enough power to profile at first base. That question remains, and the answer will determine whether or not he matters in fantasy. His plate skills (13.0 BB%) and all-fields approach bode well for his ability to have relative success at Double-A and Triple-A. He hit .260/.355/.327 against lefties, so he could be platooned in the majors. Rivas slashed .311/.429/.467 in the Arizona Fall League, but his 28.6 K% was easily his worst mark in pro ball. He has some experience in left field, so he would debut there if he remains with Oakland, as he is obviously not displacing Matt Olson.
More Fantasy News