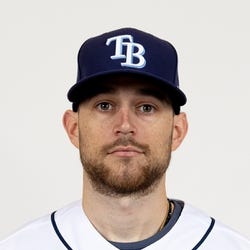 Out
Injury Back
Est. Return 2/1/2023
2022 Stats
AVG
.221
HR
8
RBI
25
R
31
SB
1
2023 Projections
AVG
HR
RBI
R
SB
Unlock Our Projections
2023 Fantasy Outlook
Lowe took hold of an everyday role in 2021 and delivered an .863 OPS and 39 homers in 149 games, but a nagging back injury limited him to only 65 games last year. He batted .221 but finished 2022 witha slightly-above-average 104 wRC+, and he also cut his strikeout rate nearly five percentage points to 22.9 percent. It's unclear exactly how much the back injury affected the second baseman's production, and it's worth keeping an eye on whether the issue resurfaces again during 2023. He fared better against left-handed pitching with a .793 OPS, though that success may not indicate much since it covered only 48 plate appearances. A return to his 2021 form shouldn't be expected, but Lowe should be in store for a bounceback season in 2023. Read Past Outlooks
read more
RANKSFrom Preseason
#

* Exit Velocity and Barrels/PA % are benchmarked against 2019 data (min 400 PA) and Hard Hit Rate is benchmarked against last season's data (min 400 PA). See here for more exit velocity/barrels stats plus an explanation of current limitations with that data set.
BB/K
0.44
BB Rate
10.2%
K Rate
22.9%
BABIP
.263
ISO
.162
AVG
.221
OBP
.308
SLG
.383
OPS
.691
wOBA
.308
Exit Velocity
89.4 mph
Hard Hit Rate
28.6%
Barrels/PA
6.8%
Expected BA
.237
Expected SLG
.401
Sprint Speed
22.5 ft/sec
Ground Ball %
37.9%
Line Drive %
20.7%
Fly Ball %
41.4%
Prospect Rankings History
View Complete Brandon Lowe Prospect Ranking History
Advanced Batting Stats
Loading Advanced Batting Stats...
Additional Stats
Games By Position
Defensive Stats
Loading Games Played by Position...
Loading MLB Defensive Stats...
Batted Ball Stats
Loading Batted Ball Stats...
Stats Vs Upcoming Pitchers
Want more matchup stats?
View Brandon Lowe vs. Pitcher Stats
Loading Matchup Stats...
Rays Depth Chart
Our full team depth charts are reserved for RotoWire subscribers.
Subscribe Now
Recent RotoWire Articles Featuring Brandon Lowe
2023 Fantasy Baseball Rankings - Way Too Early Top 300 Draft Ranks
46 days ago
46 days ago
James Anderson provides a way too early top 300 rankings for those who have the itch to start drafting for 2023.
MLB Barometer: End-of-Season Risers and Fallers
59 days ago
59 days ago
For his end-of-year-wrap-up, Erik Halterman goes by round to list his risers to see how they performed vs. their earned auction value ranking, starting with Mookie Betts in Round 1.
MLB: Postseason Cheat Sheet and Strategy
60 days ago
60 days ago
Todd Zola tackles the MLB Postseason Cheat Sheet for RotoWire and discusses his approach to postseason leagues this year.
Past Fantasy Outlooks
2022
2021
2020
2019
Lowe was finally given his chance to function as an everyday player, and he rewarded the club's faith in him by having a career year at the plate despite his flaws. He fell just shy of joining Marcus Semien last season, and historically Rogers Hornsby and Ryne Sandberg, as the only second basemen to ever hit 40 or more homers while scoring 100 runs and driving in 100. Around the excellent run production, Lowe still has too much swing-and-miss in his game (bottom seventh percentile), but the strikeout rate has improved over the ugly rate from the 2019 season. The full-time playing time also meant increased exposure to lefties, and while he did hit 10 of his 39 homers against lefties, his .198 average and 34.0% strikeout rate against them in 188 plate appearances explain why his batting average tumbled from the prior two seasons. His 2022 should be another above-average offense campaign, but it will be tough for him to hit even .250 against southpaws.
Lowe is 5-foot-10 and 185 pounds, yet continues to barrel the baseball like few others in the game. Lowe hits what the local radio team calls "Helium Balls" because they tend to just stay in the air longer than most flyballs until they find the seats. For the first six weeks of the 2020 season, Lowe was a leading candidate for the AL MVP as he had a .273/.371/.612 slash line with 10 homers, 26 runs, and 27 RBI heading into September. He cooled off a bit with a .264/.345/.458 line the rest of the way, but then was downright abysmal in the playoffs, hitting .118/.183/.276 around the two-homer game in the World Series with a 34% strikeout rate. He hit .300 with six homers against lefties in 2020, somewhat quieting the concerns of him being platooned, but the postseason slump is definitely concerning. The strikeouts limit his batting average upside, but he does accept his walks and hits with power to all fields.
Lowe inked a six-year, $24 million extension last March, ensuring he would hold a vital role for the Rays right away after a strong 43-game cameo in 2018. Injuries effectively kept Lowe out of the mix after the All-Star break, but his big first half still made his season an unequivocal success. Initially tabbed for a utility role, the 25-year-old settled at the keystone and was among the top fantasy options at the position when healthy, slashing .276/.339/.523 with 16 homers and five steals before the break. If injuries hadn't intervened, Lowe may have been headed for a drop-off, as his 33.9 K% and .381 BABIP loomed as major signs that the .276 average would fall. Lowe's ability to rack up counting stats appears more repeatable based on his Statcast metrics, so as long as fantasy managers can deal with a sub-.250 average and the Rays benching him versus lefties, there's still value to be had.
It's difficult to make heads or tails of Lowe. He totaled 28 homers and posted wRC+ marks of 156 and 178 at Double-A and Triple-A, respectively, last season. Lowe was also 13% better than league average, offensively, in his first foray into the major leagues. However, he was relatively old for those levels in the minors and had a 25.7% strikeout rate in the big leagues. Statcast suggests he was a .220-ish hitter. His 77.4% zone-contact rate was way below league average and is a red flag looking ahead to 2019 and beyond. There is some speed here to go along with the pop, and Lowe has shown that he will accept his walks. After the Rays traded Mallex Smith, general manager Erik Neander said publicly that Lowe will be in the mix for a spot on the Opening Day roster, but a starting spot seems unlikely barring multiple injuries in front of him on the depth chart.
More Fantasy News