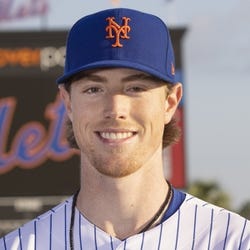 10-Day IL
Injury Thumb
Est. Return 10/7/2022
2022 Stats
AVG
.184
HR
2
RBI
5
R
4
SB
0
Rest-of-Season Projections
AVG
HR
RBI
R
SB
Unlock Our Projections
2022 Fantasy Outlook
Baty can hit the ball really hard, but he also strikes out a lot and has logged terrible groundball rates in pro ball. He had a 51.6 GB% at High-A and a 61.2 GB% at Double-A. His run in the Arizona Fall League generated buzz after registering an elite maximum exit velocity, but he still wasn't driving the ball over the fence, hitting one home run with a .405 SLG and a 30.4 K% in 25 games. A 6-foot-3, 210-pound left-handed hitter, Baty has improved enough defensively that he should be able to stick at third base long term. He is talented, and if he changes his launch angle, he could be quite valuable, especially in OBP leagues. However, with Baseball America and Baseball Prospectus each ranking him as a top-40 overall prospect this offseason, this may be the perfect time to sell high in dynasty leagues. Read Past Outlooks
read more
RANKSFrom Preseason
#599
ADP
#

* Exit Velocity and Barrels/PA % are benchmarked against 2019 data (min 400 PA) and Hard Hit Rate is benchmarked against last season's data (min 400 PA). See here for more exit velocity/barrels stats plus an explanation of current limitations with that data set.
BB/K
0.25
BB Rate
4.9%
K Rate
19.5%
BABIP
.179
ISO
.158
AVG
.184
OBP
.244
SLG
.342
OPS
.586
wOBA
.262
Exit Velocity
91.1 mph
Hard Hit Rate
30.0%
Barrels/PA
4.8%
Expected BA
.287
Expected SLG
.414
Sprint Speed
23.3 ft/sec
Ground Ball %
53.3%
Line Drive %
16.7%
Fly Ball %
30.0%
Prospect Rankings History
Advanced Batting Stats
Loading Advanced Batting Stats...
Additional Stats
Games By Position
Defensive Stats
Loading Games Played by Position...
Loading MLB Defensive Stats...
Batted Ball Stats
Loading Batted Ball Stats...
Stats Vs Upcoming Pitchers
Want more matchup stats?
View Brett Baty vs. Pitcher Stats
Loading Matchup Stats...
Mets Depth Chart
Our full team depth charts are reserved for RotoWire subscribers.
Subscribe Now
Recent RotoWire Articles Featuring Brett Baty
MLB Hitting Prospect Draft For 2023
21 days ago
21 days ago
James Anderson conducted a draft of hitting prospects for 2023 redraft value only, in which he landed Vaughn Grissom with the No. 4 overall pick.
NL FAAB Factor: Waiver Pickups of the Week
24 days ago
24 days ago
Jan Levine has profiled a couple of Atlanta starters who could provide fantasy worth down the stretch.
NL FAAB Factor: Waiver Pickups of the Week
31 days ago
31 days ago
Jan Levine packs this week's edition with a number of pitchers who may be set to receive more opportunities.
Yahoo DFS Baseball: Friday Picks
33 days ago
33 days ago
Mike Barner is loading up on Padres bats Friday against Kansas City.
NL FAAB Factor: Waiver Pickups of the Week
38 days ago
38 days ago
Jan Levine believes one of baseball's top prospects will be called up soon enough.
Past Fantasy Outlooks
2021
2020
The main development for Baty last season was that he reported to the alternate training site in August in the best shape he has been in since the Mets drafted him with the No. 12 overall pick in 2019. Listed at 6-foot-3, 210 pounds when he was drafted, Baty was not unathletic, but he had a bit of a doughy physique. He is reportedly more toned, and monster all-fields power is still his calling card. He is not unlike Nolan Jones, in that he is much more valuable in OBP leagues than AVG leagues as he works long at-bats, which leads to an abundance of walks and strikeouts. That patient approach was evident during the fall instructional league. Baty turned 21 in November and was one of the oldest prep players from his class. He may head to Low-A initially, but given his age, the Mets will likely look to push him up to High-A in fairly short order. Baty will continue to be developed as a third baseman for now.
Seen as one of the best offensive-minded players from the high school ranks, Baty was selected by the Mets with the 12th-overall pick. He hit just .234 across stops in the Gulf Coast, Appalachian and New York-Penn leagues, but thanks to a 15.4 BB%, he had a .368 OBP in his pro debut. The early returns suggest he may be a three-true-outcomes slugger (28.5 K%), so he should be slightly downgraded in batting average leagues. Baty, who hits left-handed and throws right-handed, has monster raw power to all fields that he has no trouble getting to in games. He was old for his class and turned 20 this offseason, so he won't get the benefit of the doubt if he struggles in his full-season debut. Defensively, there are concerns that he might outgrow third base -- he is already 6-foot-3, 210 pounds -- but he has the arm and hands for the position.
More Fantasy News