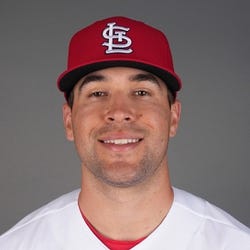 2022 Stats
AVG
.236
HR
8
RBI
42
R
56
SB
5
2023 Projections
AVG
HR
RBI
R
SB
Unlock Our Projections
2023 Fantasy Outlook
Carlson's own manager was driving the hype train last spring, predicting big things for a player he envisioned as his leadoff man. That train went off the rails in a hurry as Carlson mostly struggled before landing on the injured list in May with a hamstring strain. A thumb sprain put him back on the shelf in September and the outfielder couldn't really get going in between. In the end, Carlson slashed .236/.316/.380 across 488 plate appearances. After popping 18 home runs in 2021, Carlson managed eight long balls last season to go along with five steals in seven attempts. If there's a silver lining it's that Carlson trimmed his strikeout rate five percentage points to 19.3%. Keep in mind too that Carlson is still only 24 years old and will be for the entirely of the 2023 season. While far too young to give up on, the switch hitter had dramatic platoon splits and the Cardinals may be forced dial back his playing time slightly if his struggles against lefties continue. Read Past Outlooks
read more
RANKSFrom Preseason
#

* Exit Velocity and Barrels/PA % are benchmarked against 2019 data (min 400 PA) and Hard Hit Rate is benchmarked against last season's data (min 400 PA). See here for more exit velocity/barrels stats plus an explanation of current limitations with that data set.
BB/K
0.48
BB Rate
9.2%
K Rate
19.3%
BABIP
.281
ISO
.144
AVG
.236
OBP
.316
SLG
.380
OPS
.695
wOBA
.308
Exit Velocity
86.1 mph
Hard Hit Rate
27.5%
Barrels/PA
3.1%
Expected BA
.234
Expected SLG
.355
Sprint Speed
24.1 ft/sec
Ground Ball %
42.3%
Line Drive %
20.7%
Fly Ball %
37.0%
Prospect Rankings History
View Complete Dylan Carlson Prospect Ranking History
Advanced Batting Stats
Loading Advanced Batting Stats...
Additional Stats
Games By Position
Defensive Stats
Loading Games Played by Position...
Loading MLB Defensive Stats...
Batted Ball Stats
Loading Batted Ball Stats...
Stats Vs Upcoming Pitchers
Want more matchup stats?
View Dylan Carlson vs. Pitcher Stats
Loading Matchup Stats...
Cardinals Depth Chart
Our full team depth charts are reserved for RotoWire subscribers.
Subscribe Now
Recent RotoWire Articles Featuring Dylan Carlson
NFBC Main Event: Fever Dream, Chapter 5
60 days ago
60 days ago
Ryan Rufe walks us through the final few weeks of his first foray into the NFBC Main Event.
MLB: Postseason Cheat Sheet and Strategy
60 days ago
60 days ago
Todd Zola tackles the MLB Postseason Cheat Sheet for RotoWire and discusses his approach to postseason leagues this year.
NL FAAB Factor: Waiver Pickups of the Week
71 days ago
71 days ago
Pitching remains Jan Levine's focus for the final week of September.
NFBC Main Event: Fever Dream, Chapter 4
84 days ago
84 days ago
Ryan Rufe goes over the moves he made and the lessons he learned while managing his NFBC Main Event team over the last two months.
NL FAAB Factor: Waiver Pickups of the Week
85 days ago
85 days ago
Jan Levine details a few NLers riding late-season surges, including a starter in Philly who's making the most of his opportunities.
Past Fantasy Outlooks
2022
2021
2020
Many prospects cruising through Double A and Triple A when they're 20 years old are overmatched in the majors if they debut the next season. Such was the case for Carlson in 2020 before he picked things up down the stretch. Carlson's follow-up was much better as he demonstrated many of the skills earning him top prospect status. Specifically, Carlson improved his plate discipline by walking more and fanning less. His overall average exit velocity was only 29th percentile, but it was closer to league average on flyballs, supporting power. A low exit velocity on grounders combined with 73rd percentile sprint speed and a little good fortune yielded a .250 BABIP on groundballs, 11 points above average. It all added up to a 113 wRC+, impressive for a 22-year-old. Carlson has 25-15 upside, just temper expectations this season. Pay for moderate growth, likely from continued improvement with his plate discipline.
The best Cardinals hitting prospect since Oscar Taveras, Carlson was a spring training standout and would have spent the bulk of the year in the majors under normal circumstances. He eventually got the call in mid-August when the Cardinals resumed play following a team-wide COVID-19 outbreak. He struggled and was demoted in early September. While it's damning with faint praise, Carlson was the Cardinals' best hitter after getting recalled Sept. 18. Including three playoff games, he hit .288/.389/.533 over his final 54 PA. Strikeouts were still an issue over that stretch (27.8 K%), but he got a lot more patient (13.0 BB%) as he settled in against big-league pitching. He doesn't have eye-popping exit velocity readings or blazing speed (74th percentile), but the 22-year-old switch hitter projects to be good at every aspect of the game. He should open the year with a prime lineup spot and everyday role.
In just one season, Carlson went from an interesting sleeper in the Cardinals' system to a top-10 prospect in all of baseball, and he is now knocking on the door of the majors. He was the second-youngest player and second-best hitter (142 wRC+) in the Texas League, and his 10.8 BB% and 20.3 K% are marks we would expect from a player several years older. Carlson's 33.3 Oppo% and 25.9 LD% on that circuit were also elite marks and his above-average speed led to 18 steals on 25 attempts. The switch hitter posted the best statistics of his career in 18 games at Triple-A, but there was obviously a lot of noise in those numbers. Carlson has a chance to be a plus contributor in all five roto categories, but it's his high floor that makes him so appealing in dynasty and redraft leagues. Regardless of who the Cardinals open the year with in the outfield, Carlson should force the issue sometime in the first half.
More Fantasy News