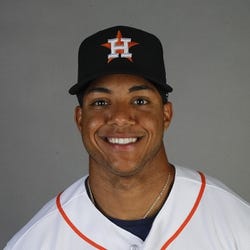 2022 Stats
AVG
.253
HR
22
RBI
63
R
72
SB
11
2023 Projections
AVG
HR
RBI
R
SB
Unlock Our Projections
2023 Fantasy Outlook
Pena had the task of replacing the void left by Carlos Correa's departure in free agency over the winter. Pena had no major league experience coming into the season and had just 160 plate appearances at the minor league level the previous season, but finished the season slightly better than league average with a 102 wRC+. Few would have projected him with double-digit steals let alone double-digit homers, yet the rookie did both hitting more homers in 2022 than he had in his professional baseball career from 2018-2021 and stole more bases than he did in 2019 and 2021 combined. He didn't accept many walks in Triple-A in 2021 and accepted even fewer as a rookie while striking out often, but the Houston lineup was deep enough to absorb these risks and keep his excellent defense in the lineup as often as it was. The profile is rather reminscent of a younger Javier Baez with perhaps a little more contact, but the same types of risks apply with the conditions ripe for a sophomore slump. Read Past Outlooks
read more
RANKSFrom Preseason
#

* Exit Velocity and Barrels/PA % are benchmarked against 2019 data (min 400 PA) and Hard Hit Rate is benchmarked against last season's data (min 400 PA). See here for more exit velocity/barrels stats plus an explanation of current limitations with that data set.
BB/K
0.16
BB Rate
4.0%
K Rate
24.3%
BABIP
.298
ISO
.173
AVG
.253
OBP
.289
SLG
.426
OPS
.715
wOBA
.312
Exit Velocity
88.1 mph
Hard Hit Rate
28.6%
Barrels/PA
6.8%
Expected BA
.248
Expected SLG
.397
Sprint Speed
25.6 ft/sec
Ground Ball %
46.4%
Line Drive %
20.7%
Fly Ball %
32.9%
Prospect Rankings History
View Complete Jeremy Pena Prospect Ranking History
Advanced Batting Stats
Loading Advanced Batting Stats...
Additional Stats
Games By Position
Defensive Stats
Loading Games Played by Position...
Loading MLB Defensive Stats...
Batted Ball Stats
Loading Batted Ball Stats...
Stats Vs Upcoming Pitchers
Want more matchup stats?
View Jeremy Pena vs. Pitcher Stats
Loading Matchup Stats...
Astros Depth Chart
Our full team depth charts are reserved for RotoWire subscribers.
Subscribe Now
Recent RotoWire Articles Featuring Jeremy Pena
FanDuel MLB: Saturday World Series Game 6 Targets
30 days ago
30 days ago
Chris Bennett tackles picks for Game 6 of the World Series and suggests Rhys Hoskins against lefty Framber Valdez.
DraftKings MLB: Saturday Breakdown
30 days ago
30 days ago
There's one team Dan Marcus definitely prefers for Game 6. Read on to see if you can figure it out.
MLB DFS Picks: FanDuel Plays and Strategy for Thursday, November 3
32 days ago
32 days ago
Chris Morgan looks over the options for Game 5 of the World Series and recommends loading up on Astros, including Kyle Tucker.
Yahoo DFS Baseball: World Series Game 5 Picks
32 days ago
32 days ago
Mike Barner previews Game 5 of the World Series on Thursday in Philadelphia.
DraftKings MLB: Wednesday Breakdown
33 days ago
33 days ago
Game 4 goes Wednesday night in Philly, and Dan Marcus has your DraftKings player recommendations.
Past Fantasy Outlooks
2022
2021
2020
Pena would have been excused for having a lost season in 2021 after undergoing wrist surgery in April, but he returned in August and did enough damage at Triple-A to be firmly on the redraft radar with the offseason departure of Carlos Correa. Seen as more of a glove-first, light-hitting shortstop in 2019, Pena transformed his body over the last two seasons and he's now a ripped 6-foot, 202 pounds and has a chance to regularly impact the baseball. Pena hit .287/.346/.598 with 10 home runs, five steals (on six attempts), a 26.3 K% and a 4.5 BB% in 30 games at Triple-A, good for a 126 wRC+. As an above-average runner with improving power and a clear path to playing time, Pena is a viable mid-round pick in 50-round draft and holds and an endgame option in competitive 15-teamers. He has sacrificed his hit tool to unlock this power, and there is some risk that he could post a harmful batting average if he wins the starting shortstop job in spring training.
Pena was selected in the third round of the 2018 draft on the strength of his shortstop defense, and with each ensuing year he has made enough offensive strides to keep the dream of him becoming an everyday MLB shortstop alive. He impressed all summer at the alternate training site and then capped a strong 2020 season with a quality showing in the Dominican winter league. If he hits enough to play every day, Pena has the speed to steal 15-20 bases annually. At 6-foot, 202 pounds, Pena has the potential to tap into 20-homer power, but he figures to always be hit over power. He has always logged strikeout rates below 20 percent and is a career .290 hitter in the minors. Look for him to spend his age-23 season at Double-A and Triple-A, setting up a potential 2022 MLB debut.
If Pena were a couple years younger, he would be a much more exciting prospect, but we are forced to wait and see how the 22-year-old shortstop handles his first exposure to Double-A before jumping in with two feet. A plus defender, Pena was drafted in the third round in 2018 for his glove, but he has added muscle and did all he could with his bat to prove he can hit enough to be a regular. He logged a 138 wRC+ with excellent plate skills at Low-A. After his promotion to High-A, he had a 146 wRC+ with fewer strikeouts (17.8 K%) and much fewer walks (6.5 BB%). Pena is pretty good at using the whole field, but his linedrive rate was below-average at both stops. His ability to make contact at a solid clip combined with his above-average speed (20-for-30 on SB attempts) makes him interesting. However, even with his defensive chops, he probably needs a trade to have a realistic shot at being an everyday player.
More Fantasy News