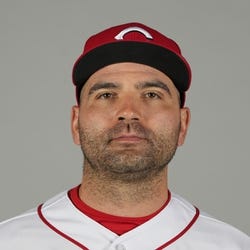 60-Day IL
Injury Shoulder
Est. Return 2/1/2023
2022 Stats
AVG
.205
HR
11
RBI
41
R
31
SB
0
Rest-of-Season Projections
AVG
HR
RBI
R
SB
Unlock Our Projections
2022 Fantasy Outlook
Votto's resurgence was one of the better stories of 2021. After three seasons of decline, Votto joined the Launch-Angle Revolution with a flourish, hitting 36 homers while posting a .938 OPS. The Statcast numbers suggest it wasn't a fluke - his average exit velocity (92.9 mph), barrel rate (17.2%) and hard hit rate (53.2%) were all in the 90+ percentile. How did Votto reverse that decline? It started towards the end of the 2020 season, when he was benched for three days and made a conscious decision to change his approach. Votto exemplified the old internet forum argument "... he could hit more homers if he wanted to ...." At age 38, can Votto repeat this level of production? Regression is a powerful force, the possibility of an injury remains high and the lineup around Votto projects to be worse. That said, it's also unlikely that you'll have to pay a draft cost commensurate with his 2021 production. Read Past Outlooks
read more
RANKSFrom Preseason
#142
ADP
#