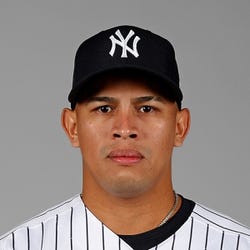 * Exit Velocity, Barrels/BBE %, Balls Hit 95+ MPH %, and Spin Rate are benchmarked against 2019 data (min 30 IP). See here for more exit velocity/barrels stats plus an explanation of current limitations with that data set.
K/BB
1.95
K/9
6.9
BB/9
3.6
HR/9
0.6
Fastball
98.1 mph
ERA
4.13
WHIP
1.29
BABIP
.289
GB/FB
3.11
Left On Base
64.0%
Exit Velocity
78.9 mph
Barrels/BBE
1.2%
Spin Rate
2305 rpm
Balls Hit 95+ MPH
18.3%
Swinging Strike
11.9%
Prospect Rankings History
View Complete Jonathan Loaisiga Prospect Ranking History
Advanced Pitching Stats
Loading Advanced Pitching Stats...
Defensive Stats
Loading MLB Defensive Stats...
Stats Vs Today's Lineup
Want more matchup stats?
View Jonathan Loaisiga vs. Batter Stats
Loading Matchup Stats...
Yankees Depth Chart
Our full team depth charts are reserved for RotoWire subscribers.
Subscribe Now
Recent RotoWire Articles Featuring Jonathan Loaisiga
Closer Encounters: 2022 Saves in Review, Part 2
44 days ago
44 days ago
Ryan Rufe recaps the saves landscape in this year's NFBC Main Event and shares his own hits and misses from this past season.
Closer Encounters: 2022 Saves in Review, Part 1
50 days ago
50 days ago
Ryan Rufe recaps this past season's saves landscape. Just how many teams preferred closer committees over the conventional approach?
The Z Files: NFBC Holdem Rankings and Strategies
52 days ago
52 days ago
Todd Zola shares his gameplan and his rankings for NFBC Postseason Holdem contests.
MLB: Postseason Cheat Sheet and Strategy
56 days ago
56 days ago
Todd Zola tackles the MLB Postseason Cheat Sheet for RotoWire and discusses his approach to postseason leagues this year.
Mound Musings: One More Call to the Pen
84 days ago
84 days ago
Mound Musings sorts out some of the most unsettled bullpens, including in Seattle where Brad Johnson believes Andres Munoz will eventually get the closers job.
Past Fantasy Outlooks
2022
2021
2020
2019
Loaisiga posted a stellar 2.17 ERA and 1.02 WHIP in 2021, his first season as a full-time reliever. Though he continued to showcase a three-pitch mix, Loaisiga lessened his fastball usage in favor of his sinker, with the result being a pedestrian 24.4 K%, but tremendous 60.9 GB% and 0.4 HR/9 marks. Due to his strong results and ability to keep the ball in the yard, the Yankees trusted Loaisiga in increasingly high-leverage situations, and he recorded five saves and 17 holds. Looking forward to 2022, Aroldis Chapman should remain locked into the closer role in New York, though he's had a stint on the injured list in all but one season since 2017. Loaisiga could see save chances if Chapman were to be absent again for any portion of 2022. His ability to pitch multi-inning stints -- 27 of his 57 appearances were for multiple innings in 2021 -- should give him the chance to rack up extra strikeouts and win opportunities even if he doesn't factor into the saves picture.
Loaisiga has been up and down from the minors and the injured list for New York while serving as a spot starter/long reliever for the past three seasons. In that time, he has produced a serviceable strikeout rate, but his ratios have been subpar due to issues with walks when he is not striking guys out. He works mid-to-upper 90s with his fastball and can throw four different pitches to both righties and lefties, but perhaps a successful path forward would be to narrow down those pitches by choosing a fastball to pair with the curve and change. Seven of his nine career homers allowed have come off the fastball, and six of those off the four-seamer. Given where he must pitch his home games, not to mention the overall run environments of the AL East, perhaps accentuating his sinker could lead to improved results. Look for more swing-role work in 2021.
Loaisiga began 2019 as the Yankees' fifth starter but pitched only two short outings before being sent down to the minors. He was then shuttled between the International League and the big club before an injury to James Paxton appeared to open the door for Loaisiga to string together a few big-league starts. Instead, the right-hander landed on the injured list himself with a strained right rotator cuff and was used as a reliever and opener when he returned to the Yankees over three months later. Loaisiga ended the regular season with a subpar 4.55 ERA over 31.2 innings, though he demonstrated a solid swing-and-miss arsenal, registering a 14.2% swinging-strike rate and 26.6 K%. The 25-year-old's fastball touches 97 mph and his spin rate of 2,424 rpm is far above average, but he may be best suited to a relief role after missing significant time with shoulder injuries each of the last two seasons.
What Loaisiga brings to the table in terms of skills is impressive, but it's tough to overlook the fact that he's now 24 and has never thrown more than 80.2 innings in a season. He appeared to be making a seamless transition to the big leagues despite skipping the Triple-A level, posting a 1.93 ERA, 1.29 WHIP and 18:8 K:BB in his first three starts with the Yankees after making the jump from Double-A Trenton. However, after his June 2 outing, Loaisiga was optioned and quickly diagnosed with right shoulder inflammation. He was shut down from throwing for close to a month, and by the time he was cleared to start a rehab assignment in mid-August, there wasn't enough time for him to build back up as a starter. It's easy to see the talent when Loaisiga is on the field as he throws 96 mph and has two other potential plus offerings (slider and changeup) and solid command, but without the innings, it's impossible to get too excited.
More Fantasy News