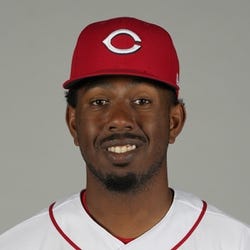 * Exit Velocity, Barrels/BBE %, Balls Hit 95+ MPH %, and Spin Rate are benchmarked against 2019 data (min 120 IP). See here for more exit velocity/barrels stats plus an explanation of current limitations with that data set.
K/BB
1.24
K/9
6.1
BB/9
4.9
HR/9
3.2
Fastball
92.2 mph
ERA
6.10
WHIP
1.58
BABIP
.240
GB/FB
0.64
Left On Base
83.3%
Exit Velocity
83.2 mph
Barrels/BBE
12.9%
Spin Rate
2291 rpm
Balls Hit 95+ MPH
31.5%
Swinging Strike
8.7%
Prospect Rankings History
View Complete Justin Dunn Prospect Ranking History
Advanced Pitching Stats
Loading Advanced Pitching Stats...
Defensive Stats
Loading MLB Defensive Stats...
Stats Vs Today's Lineup
Want more matchup stats?
View Justin Dunn vs. Batter Stats
Loading Matchup Stats...
Reds Depth Chart
Our full team depth charts are reserved for RotoWire subscribers.
Subscribe Now
Recent RotoWire Articles Featuring Justin Dunn
NL FAAB Factor: Waiver Pickups of the Week
66 days ago
66 days ago
Jan Levine concludes his column for the season with a look at the remaining schedule while also offering potential stash candidates.
DraftKings MLB: Friday Breakdown
82 days ago
82 days ago
Lucas Giolito may not be having the best season, but Chris Morgan believes a matchup against the Tigers should help his cause.
Yahoo DFS Baseball: Sunday Picks
87 days ago
87 days ago
Chris Morgan likes the surprisingly affordable Bryce Harper against his old team on Sunday's Yahoo MLB slate.
FanDuel MLB: Sunday Targets
87 days ago
87 days ago
Chris Morgan is targeting a couple Brewers bats to take on Justin Dunn and the Reds.
DraftKings MLB: Sunday Breakdown
87 days ago
87 days ago
If you're looking to save some salary on offense, Chris Morgan suggests Nolan Gorman against Mitch Keller and the Pirates.
Past Fantasy Outlooks
2022
2021
2020
2019
2017
Dunn had a solid campaign in 2021 with a 3.75 ERA, 1.31 WHIP and 49:29 K:BB over 50.1 innings (11 starts), and he was traded to the Reds in March. He improved both his strikeout and walk rates (22.5 and 13.3 percent, respectively), but both figures remains below average. The right-hander is being slow played during spring training after missing much of last season with a strain shoulder, but he should eventually be in the mix for the rotation with Cincinnati. Dunn's flyball rate (50.7 percent) could be more of a problem with his new team since he'll now have half his games coming in the hitter-friendly Great American Ball Park.
Regression to Dunn's 2.70 ERA in 2019 was expected, and while 2020's 4.34 mark appears to a decent landing, he pitched a lot worse than that number suggests. Dunn was saved by a .179 BABIP -- a very low number despite second percentile average exit velocity and 17th percentile hard-hit rate. His 15.7% walk rate was within four percentage points of his K%. Rash judgements on a two-month sample are unwise, but ignoring Dunn's underlying metrics is also not advised. Not only does he still need to hone control, but Dunn needs to be wary of an impending correction toward the hit rate posted early in his MLB career. Armed with a 93-mph fastball with below-average spin, the right-hander has little margin for error. Dunn figures to take the ball a lot for a rebuilding Mariners club in 2021, but he does not project to be a big part of that rebuild.
Dunn spent the majority of the season with Double-A Arkansas in his first year in the Mariners organization, posting a 3.55 ERA over 25 starts. His underlying numbers were strong as well, as he struck out 28.6% of opposing batters while walking just 7.1%. Dunn was given his first big-league callup in September, allowing just two runs in 6.2 innings but also walking nine batters. He hasn't had significant walk issues in the minors, but his command was never expected to be better than average. Dunn projects as a fourth or fifth starter, as his low-90s fastball and upper-80s changeup are average pitches at best, while his low-80s slider could be above-average. He has not pitched at all at Triple-A, but given the Mariners' youth movement and lack of rotation depth, he will probably enter spring training as a favorite to break camp in the big-league rotation.
The 19th overall pick in the 2016 draft rehabbed his stock in a return trip to High-A. After logging a 4.15 FIP, 1.56 WHIP and 6.2 K-BB% in 95.1 innings there in 2017, he notched a 3.00 FIP, 1.27 WHIP and 18.3 K-BB% in nine starts before a promotion to Double-A. His strikeout rate climbed to an elite 27.7% in the Eastern League, but his walk rate also spiked from 7.6% to 9.8%. Dunn was the secondary piece (after Jarred Kelenic) the Mariners received from the Mets in the Robinson Cano/Edwin Diaz trade. If he had even average command of his mid-90s fastball, the 23-year-old righty would be a high-probability mid-rotation starter, as he also features three quality offspeed pitches that can flash plus. His inability to consistently locate his heater may eventually push him to the bullpen. The Mariners will obviously give him every opportunity to start. He may debut in 2019, but seems unlikely to be a consistent, quality fantasy option until at least 2020.
Dunn split time between the bullpen and rotation at Boston College, but he appears to have the stuff to cut it as a starter. Though not the most imposing figure, Dunn possesses a blazing fastball, above-average slider, serviceable curveball and emerging changeup. The development of that last pitch may go a long ways towards determining whether he stays in the starting rotation. While command was thought to be a chief concern, Dunn impressed during his brief time in the minors after being drafted in the first round in 2016. Dunn notched a 35:10 K:BB in 30 innings for the Brooklyn Cyclones in the short-season New York-Penn League. Dunn had a minuscule 1.50 ERA during that span. Opposing batters hit just .227 against the athletic righty. He started eight of his 11 appearances for the Cyclones. Dunn could see Low-A to begin the 2017 campaign as he builds up arm strength and the Mets manage his innings.
More Fantasy News