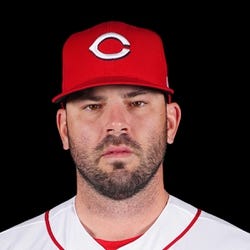 60-Day IL
Injury Calf
Est. Return 2/1/2023
2022 Stats
AVG
.214
HR
7
RBI
25
R
30
SB
2
Rest-of-Season Projections
AVG
HR
RBI
R
SB
Unlock Our Projections
2022 Fantasy Outlook
The 2021 campaign was essentially a lost season for Moustakas. He spent time on the injured list early on with a non-COVID illness before going down with a right heel contusion. There were setbacks during his recovery and Moose ended up missing close to three months, only to make another trip to the IL to end the year with right plantar fasciitis. Moustakas is eligible at third base -- suddenly the thinnest position outside of catcher -- and he can also play first base capably. Now 33 years old, Moustakas can still do damage against right-handed pitching. However, he went 3-for-35 against left-handed pitching in his limited time on the field last season and found himself in a platoon role, where he seems likely to remain given his .705 career OPS against southpaws. The Reds are rumored to be looking to move Moustakas and the final two years of his contract. The addition of the DH in the National League improves his playing-time outlook only somewhat. Read Past Outlooks
read more
RANKSFrom Preseason
#389
ADP
#