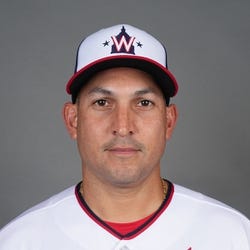 * Exit Velocity, Barrels/BBE %, Balls Hit 95+ MPH %, and Spin Rate are benchmarked against 2019 data (min 120 IP). See here for more exit velocity/barrels stats plus an explanation of current limitations with that data set.
K/BB
3.83
K/9
7.3
BB/9
1.9
HR/9
1.9
Fastball
88.6 mph
ERA
4.84
WHIP
1.37
BABIP
.320
GB/FB
1.07
Left On Base
75.0%
Exit Velocity
82.7 mph
Barrels/BBE
5.6%
Spin Rate
2491 rpm
Balls Hit 95+ MPH
27.7%
Swinging Strike
9.3%
Advanced Pitching Stats
Loading Advanced Pitching Stats...
Defensive Stats
Loading MLB Defensive Stats...
Stats Vs Today's Lineup
Want more matchup stats?
View Paolo Espino vs. Batter Stats
Loading Matchup Stats...
Nationals Depth Chart
Our full team depth charts are reserved for RotoWire subscribers.
Subscribe Now
Recent RotoWire Articles Featuring Paolo Espino
Weekly Pitcher Rankings: Decisions, Decisions
61 days ago
61 days ago
Todd Zola ranks starting pitchers ahead of a short week in which workloads are full of uncertainty.
Yahoo DFS Baseball: Tuesday Picks
65 days ago
65 days ago
Mike Barner is keying on Astros slugger Yordan Alvarez on Tuesday against Arizona.
FanDuel MLB: Tuesday Targets
65 days ago
65 days ago
Chris Bennett checks out Tuesday's slate and thinks Aaron Judge's salary has fallen enough to get back on board as he hunts for homer No. 61.
Weekly Pitcher Rankings: And Then There Was One
68 days ago
68 days ago
Robbie Ray tops Todd Zola's weekly pitcher rankings thanks to a pair of home matchups against a pair of struggling opponents.
2022 Fantasy Outlook
Espino earned only 30 innings in the major-leagues prior to the 2021 campaign, though he got extended run as the Nationals fell out of contention and lost key members of their rotation due to both trade and injury. While he began the campaign largely in mop-up duty out of the bullpen, he served nearly exclusively as a starter from June 28 on. In 17 starts, he posted a 5.01 ERA with 69 strikeouts while allowing 1.7 HR/9 across 79 innings. Now entering his age-34 season, there's little reason to expect improved results in 2022. In 98 total innings as a starter in his career, Espino has surrendered a .342 wOBA with a 4.68 ERA. With the Nationals likely to still be in the midst of a rebuild, it's possible that Espino sees time as a starter. However, with prospects such as Cade Cavalli and Seth Romero likely to see time in Washington in 2022, Espino's time in the rotation figures to be short lived.
More Fantasy News