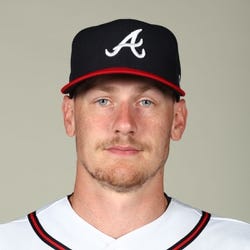 2022 Stats
AVG
.250
HR
18
RBI
66
R
67
SB
1
2023 Projections
AVG
HR
RBI
R
SB
Unlock Our Projections
2023 Fantasy Outlook
Murphy came into the season known more for his glove work than his bat, yet finished the season as the fifth-best fantasy backstop behind only Realmuto, Varsho, Smith, and Perez. Murphy pulled a Perez-like workload in plate appearances with 612 plate appearances, but Oakland used him at DH 30 times to reduce the wear and tear on his knees. He rewarded them by reducing his strikeout rate and setting career bests in every possible category, even with his first career steal! The ballpark and the supporting cast for 2023 do him absolutely no favors, and he is just now entering his first year of eligibility so the possibility of a trade to a better situation is still off on the horizon. For now, enjoy the volume he provides but now you will have to pay full freight for him as the discount days are over. Read Past Outlooks
read more
RANKSFrom Preseason
#

* Exit Velocity and Barrels/PA % are benchmarked against 2019 data (min 400 PA) and Hard Hit Rate is benchmarked against last season's data (min 400 PA). See here for more exit velocity/barrels stats plus an explanation of current limitations with that data set.
BB/K
0.45
BB Rate
9.2%
K Rate
20.3%
BABIP
.290
ISO
.177
AVG
.250
OBP
.332
SLG
.426
OPS
.759
wOBA
.334
Exit Velocity
88.7 mph
Hard Hit Rate
32.1%
Barrels/PA
7.2%
Expected BA
.255
Expected SLG
.439
Sprint Speed
22.2 ft/sec
Ground Ball %
42.1%
Line Drive %
20.3%
Fly Ball %
37.6%
Prospect Rankings History
View Complete Sean Murphy Prospect Ranking History
Advanced Batting Stats
Loading Advanced Batting Stats...
Additional Stats
Games By Position
Defensive Stats
Loading Games Played by Position...
Loading MLB Defensive Stats...
Batted Ball Stats
Loading Batted Ball Stats...
Stats Vs Upcoming Pitchers
Want more matchup stats?
View Sean Murphy vs. Pitcher Stats
Loading Matchup Stats...
Athletics Depth Chart
Our full team depth charts are reserved for RotoWire subscribers.
Subscribe Now
Recent RotoWire Articles Featuring Sean Murphy
2023 Fantasy Baseball Rankings - Way Too Early Top 300 Draft Ranks
46 days ago
46 days ago
James Anderson provides a way too early top 300 rankings for those who have the itch to start drafting for 2023.
The Catcher Renaissance
67 days ago
67 days ago
James Anderson details the boom in quality offensive catchers for dynasty leagues and redraft leagues and the supply and demand issues that will spawn from this catcher renaissance.
Yahoo DFS Baseball: Saturday Picks
79 days ago
79 days ago
Chris Morgan is encouraging you to take a couple Brewers bats versus Jameson Taillon and the Yankees.
DraftKings MLB: Tuesday Breakdown
83 days ago
83 days ago
Erik Halterman checks in with plenty of insights for Tuesday’s DraftKings offering, which features 11 games worth of action to work with.
MLB Barometer: Risers & Fallers
84 days ago
84 days ago
Erik Halterman discusses the rule changes for next season and Mike Trout's 20-game stretch in which he's hit .316/.372/.734 with 10 home runs.
Past Fantasy Outlooks
2022
2021
2020
2019
While Murphy continued to establish himself as one of the game's top defensive backstops, the 27-year-old endured his fair share of offensive struggles last season. He slashed .216/.306./405 with 17 homers while striking out at a 25.4% clip. Instead of seeing some positive regression from his .278 BABIP in 2020, Murphy saw his average on balls in play drop even further to .257 in 2021. Now is not the time to be overly pessimistic about Murphy's offensive potential going forward, however, especially considering that 2021 was his first full 162-game big-league season. If he can cut down on his strikeouts and have better luck when he does put the ball in play, he may be able to improve across the board offensively in 2022. At the very least, fantasy owners can be confident that his elite defense will keep him among the league leaders in games started behind the plate.
Murphy's 2020 Statcast page paints a confusing picture. His average exit velocity and hard-hit rate were 91st percentile while he toted an 83rd percentile barrel rate. Yet, his expected batting average was a paltry .211, in part due to a 26.4 K% as well as a home park that suppresses hits. It bodes well how hard Murphy stings the ball when he happens to hit it. A 17.4 BB% is also encouraging. Murphy's power metrics are promising as he posted a 22.6% HR/FB and 39.6% flyball rate last season. Don't be fooled by last season's .233 average. With fewer strikeouts and a BABIP more reflective of his batted-ball profile, Murphy has breakthrough potential. All this on top of excellent glove work, a strong arm and improving pitch framing mean he's sure to see bountiful playing time. The floor is shaky, but the ceiling is enticing.
It's hard to start a career much hotter than Murphy did. After missing most of the early part of the season with knee issues, he made his first career start in early September and went on to hit .414 with four homers in his first nine games of the month. He came down to earth after that, grabbing just one hit in 10 games over the rest of the month, but it was enough to make him the starting catcher heading into the playoffs. He will hold onto that job this season and should be a viable option in most formats. The 25-year-old hit .288/.369/.521 across his last two seasons in the minors, and scouts project him to hit for plus power with an average or better hit tool. His defense has a chance to be excellent, so he could rank near the top of the position in games played, with the one big caveat that he has missed significant time with injuries in each of the last two seasons.
Murphy spent the bulk of the 2018 season with Double-A Midland, posting a strong .288/.358/.498 line with eight homers in 68 games. Those numbers represented significant growth from his 53-game stint at the same level the season prior, when he hit just .209/.288/.309. The young backstop did miss a month and a half late in the season after undergoing wrist surgery, but he returned to play eight games at the end of the year, including his first three at the Triple-A level. That's probably the level at which he'll spend the bulk of this year, though he'll have a chance for at least some MLB at-bats, especially given the Athletics' lack of established options at his position. Scouting reports project Murphy as a fairly good defender, which should help him get playing time. He doesn't project for much more than average power or contact.
More Fantasy News