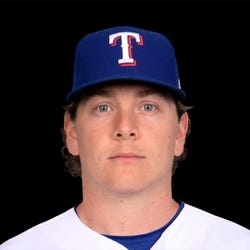 * Exit Velocity, Barrels/BBE %, Balls Hit 95+ MPH %, and Spin Rate are benchmarked against 2019 data (min 120 IP). See here for more exit velocity/barrels stats plus an explanation of current limitations with that data set.
K/BB
2.13
K/9
7.6
BB/9
3.6
HR/9
2.9
Fastball
94.4 mph
ERA
7.41
WHIP
1.73
BABIP
.339
GB/FB
1.04
Left On Base
66.4%
Exit Velocity
83.3 mph
Barrels/BBE
7.0%
Spin Rate
2111 rpm
Balls Hit 95+ MPH
26.0%
Swinging Strike
7.7%
Prospect Rankings History
Advanced Pitching Stats
Loading Advanced Pitching Stats...
Defensive Stats
Loading MLB Defensive Stats...
Stats Vs Today's Lineup
Want more matchup stats?
View Spencer Howard vs. Batter Stats
Loading Matchup Stats...
Rangers Depth Chart
Our full team depth charts are reserved for RotoWire subscribers.
Subscribe Now
Recent RotoWire Articles Featuring Spencer Howard
Weekly Pitcher Rankings: Decisions, Decisions
67 days ago
67 days ago
Todd Zola ranks starting pitchers ahead of a short week in which workloads are full of uncertainty.
Weekly Pitcher Rankings: And Then There Was One
74 days ago
74 days ago
Robbie Ray tops Todd Zola's weekly pitcher rankings thanks to a pair of home matchups against a pair of struggling opponents.
Todd's Takes: Arsenals and Angles
97 days ago
97 days ago
Todd Zola analyzes pitchers with limited arsenals before tackling the most interesting fantasy fall-out from Wednesday's schedule.
Yahoo DFS Baseball: Sunday Picks
122 days ago
122 days ago
Chris Morgan provides his top plays for Sunday's Yahoo MLB contests, including a stack of Orioles bats against the struggling Bryse Wilson.
FanDuel MLB: Sunday Targets
122 days ago
122 days ago
Chris Morgan expects plenty of offense in the Rangers-White Sox matchup and has selected stacks from both sides.
Past Fantasy Outlooks
2022
2021
2020
2019
Howard and the Phillies simply weren't a great fit. By the time he was traded to Texas, it seemed like both sides were happy to be moving on. Health and durability have been issues for Howard throughout his pro career, but when he's been on, he has looked like a future No. 2 starter, with a bevy of plus offerings. He seems to be back on track with Texas, and after allowing one run while striking out six over five innings in big-league spring training, he has locked up a spot in the rotation. Howard comes with a lot of risk, but this has all the signs of a post-hype sleeper making the most of a change of scenery.
Howard was dominant in the 2019 Arizona Fall League, but didn't look like the same pitcher over 24.1 innings in the majors. His stuff wasn't as crisp or as electric, leading to an underwhelming 20.4 K%. He was shut down in September with shoulder soreness, and it's possible he was never quite right physically or mentally last season. Howard also missed time in 2019 with a sore shoulder, which is a troubling trend. His fastball, slider and changeup can all be at least plus pitches when he is at his best, and he has shown solid command in the past, which could add up to a No. 2 starter if he can overcome his shoulder issues. Those close with Howard say he is fully healthy and will be back with a vengeance in 2021. He will enter camp as a favorite to claim a rotation spot, but he hasn't thrown over 100 innings since 2018, so we shouldn't be projecting much more than 140-150 innings, even with good health.
Including 21.1 IP in the Arizona Fall League, Howard had a 1.99 ERA, 0.84 WHIP and 133:28 K:BB in 99.1 IP en route to establishing himself as one of the game's top pitching prospects. His plus-plus fastball sat at 95-98 mph in his final AFL outing and has touched triple-digits in the past. Howard's slider could be a 70-grade pitch and while he is still working on consistency with his changeup, that pitch also has plus-plus potential. His curveball lags behind as a fourth offering. A reliever in college, the 6-foot-2 righty has developed average command in pro ball. He missed two months last year with shoulder soreness and remains pretty risky from a health standpoint, given how hard he throws. The way he handled Double-A and the AFL suggests he will head to Triple-A. Given the openings in the MLB rotation and Philly's high expectations for 2020, Howard should spend most of the year with the big club.
A 6-foot-3 righty whom the Phillies selected with the 45th overall pick in 2017, Howard spent his entire age-21/22 season at Low-A, flying under the radar until he went on one of the most dominant runs of any pitcher to close out the year. He struck out 10 over six scoreless frames on June 29, and from that date on, he logged a 2.12 ERA, 1.10 WHIP and 81 strikeouts over 59.1 innings. That 11-start run coincided with an uptick in stuff. His fastball was a plus pitch early in the year, but he was touching triple digits with it later in the season. That velocity, combined with movement, will allow it to play as at least a 70-grade pitch if he can locate it in the upper levels. His slider is a second plus pitch, and his curveball and changeup round out a deep repertoire. He did not start touching 100 mph until late in the year, so his stock hasn't really blown up yet, but if he comes out pumping that type of gas with solid command early in 2019, look out.
More Fantasy News